"The Age of Anxiety"
Assessing the impacts of the war on
artistic, literary, and existential thought 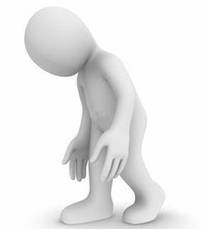 Initially, the "Great War" was a popular war. But as the deaths and casualties piled up and the war dragged into four long years, people began to realize not only the futility of such human struggle, but began to come to grasp the emotional impact the postwar years would have on the European populace.

The "Age of Anxiety", from the years after the War to the start of the Second World War almost 20 years later, reveals the fear, disillusionment, confusion, and dismay that Europeans endured. Categorized in the areas of art, literature, and thought, we can see the "Age of Anxiety" is not contained to the past, but reveals a human nature much like ours today, on a century-long delay...

Call it "Chaos and Classicism". The Guggenheim Museum did in 2010 when they held an exhibit on postwar art and sculpture. In attempts to provide stability, many artists returned to "classical art", complete with a focus on the beauty of the human form and the ingenuity of man. Others went completely in the opposite direction: Dadaism, "does not mean anything", and therein lies its goal. Examine the art samples below and provide your interpretations of the art on the Padlet. 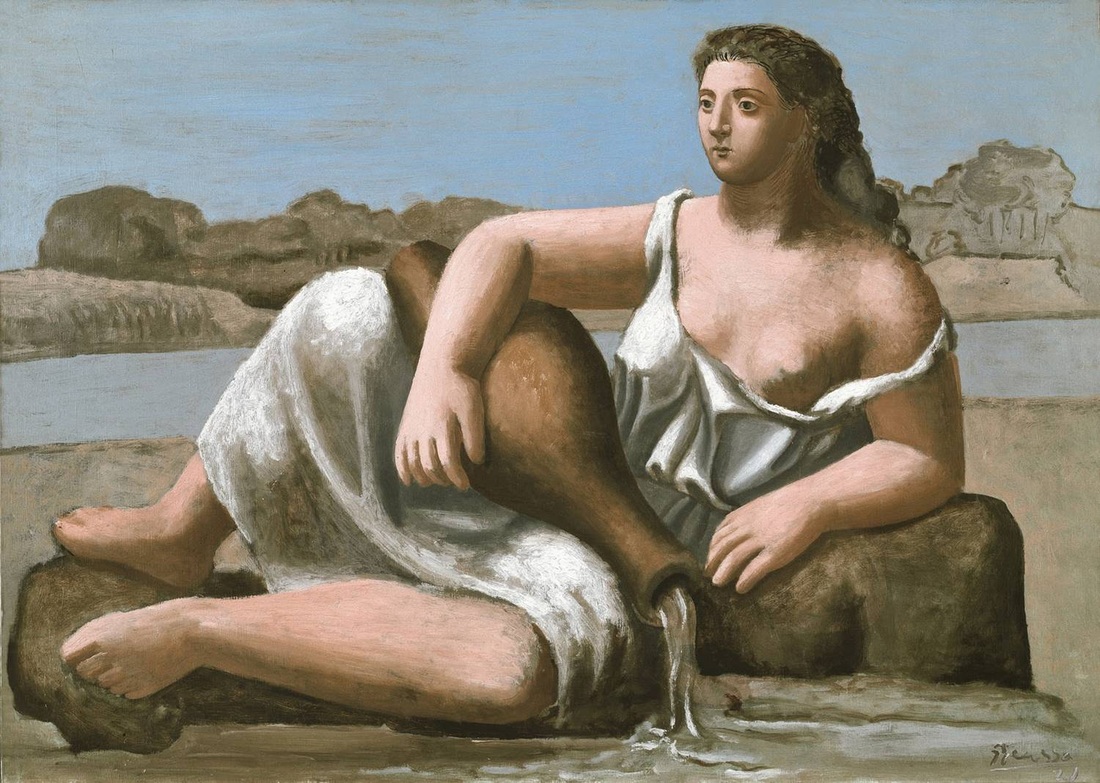 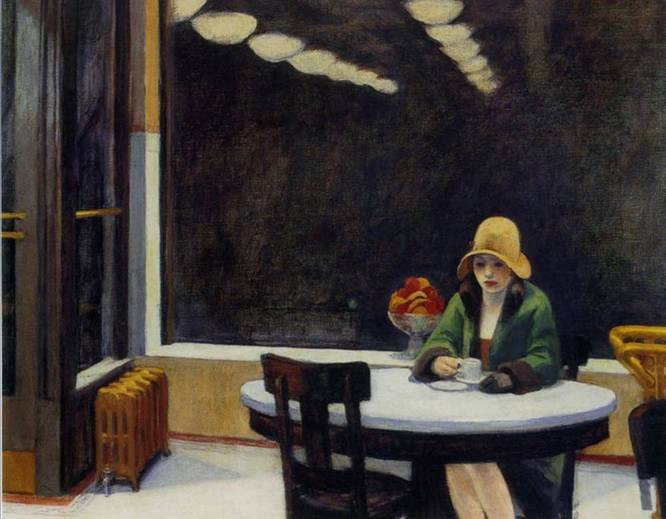 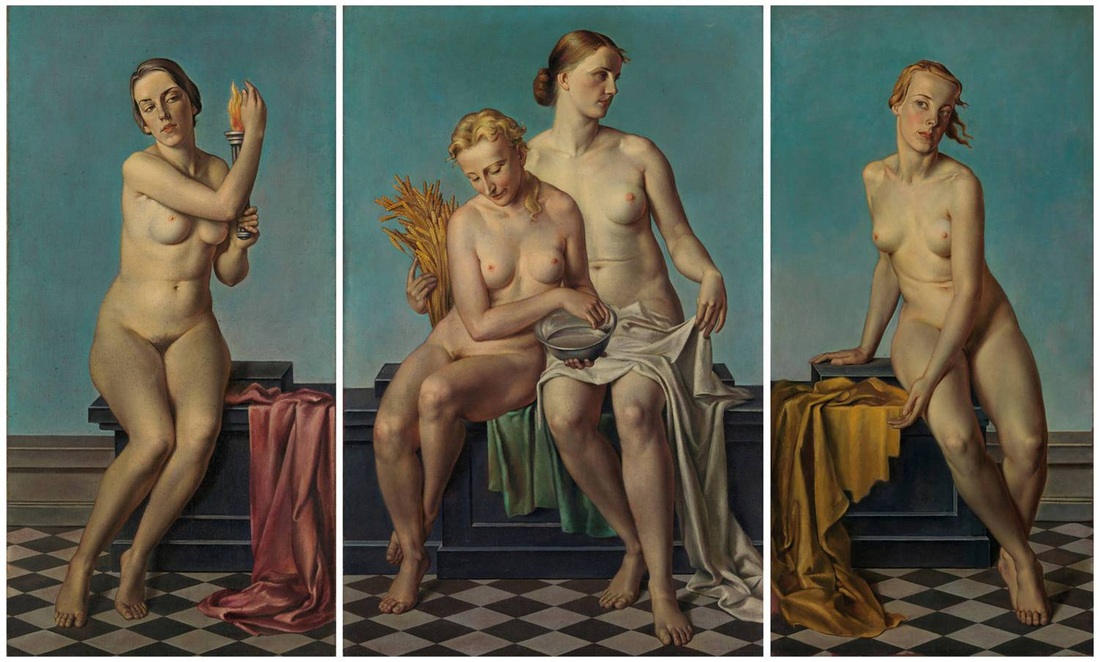 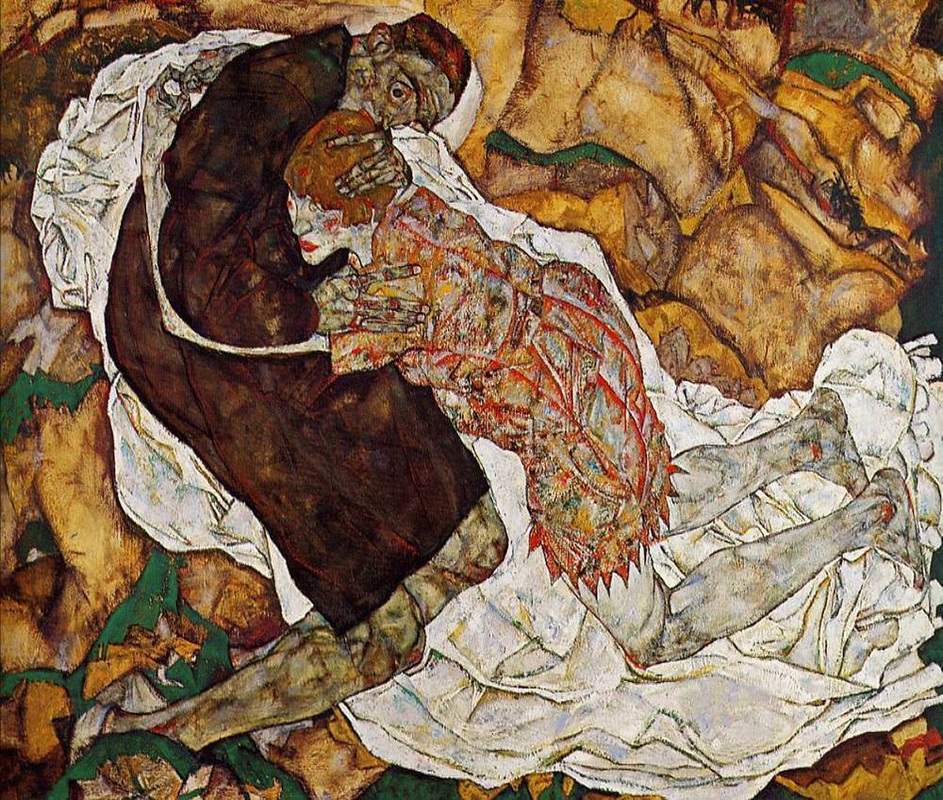 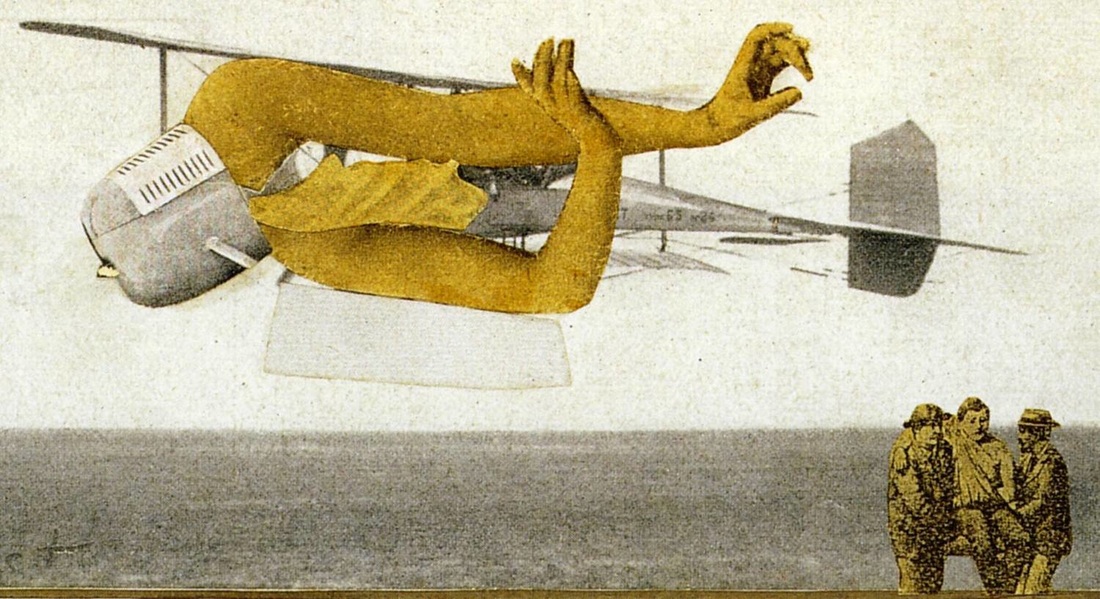 "The Murdering Airplane" by Max Ernst, 1920
"Guernica" is one of the most famous Cubist pieces. Completed in 1937, Picasso lamented the Spanish Civil War that tore Spain apart in the late 1930s as fascist leaders clashed with democratic ones. In fact, the city of Guernica was all-but completely destroyed! Let's try to figure it out below.

"Guernica" by Pablo Picasso, 1937
When examining the piece above, draw focus to the images shown below.

Dadaism is a repulsion against anything previously established. Whether rebelling against the government ("No more republicans...royalists...socialists...") or against traditional art itself ("No more painters...writers...musicians... sculptors..."), Dadaism dared to be different. In fact, some, like Dali, even morphed from Dadaism to Surrealism, with an emphasis on the subconscious and the impossible, citing the psychology of Freud and Nietzsche. We find one of Dali's most famous pieces below. Yes, most remember him for his "melting clock" pictures, but I like this one better! 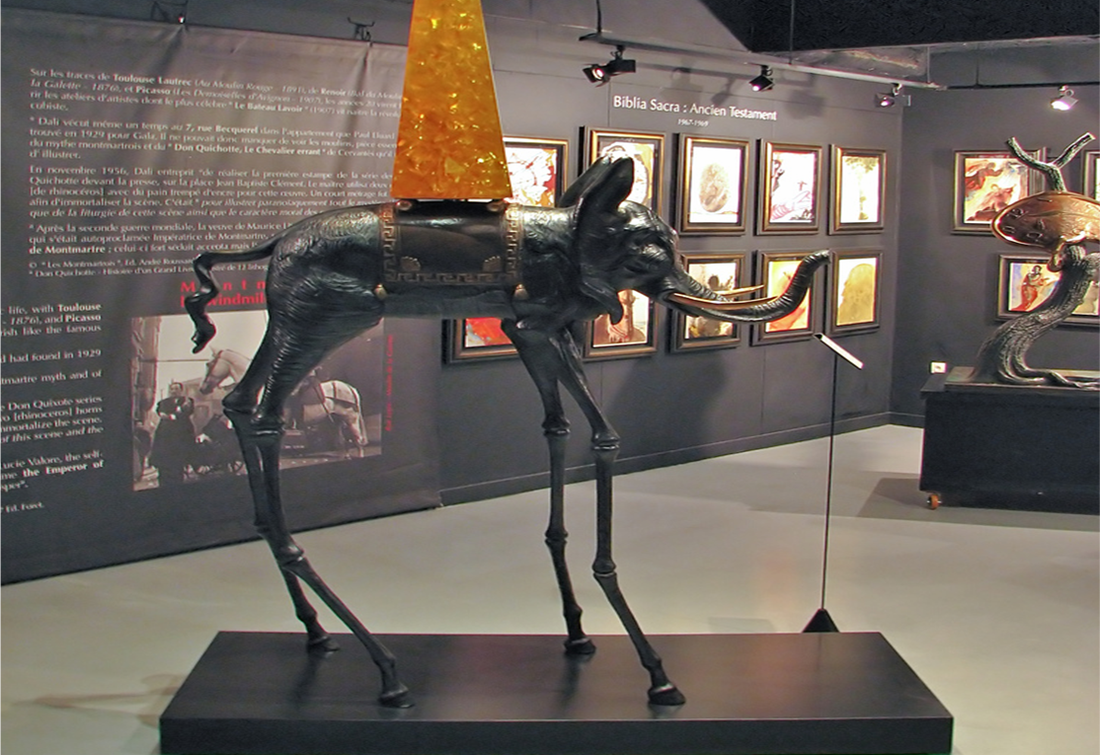 Never such innocence,
Never before or since,
As changed itself to past
Without a word--the men
Leaving the gardens tidy,
The thousands of marriages
Lasting a little while longer:
Never such innocence again.
(Philip Larkin, MCMXIV, 1923)
And this poem by Philip Larkin seems to sum up perfectly the "Age of Anxiety": innocence lost, and "never again" will it return. The "Greatest Generation" had seen too much, experienced too much, and had "lived" too much. And the literature of the time reflected that.

There was a disconnect, however, between those who "lived the war" and those who "observed" it. Historian Stephen Spender wrote:
French writer Paul Valery wrote the following about the Age:
And it was German-American writer Paul Tillich who actually coined the phrase we're using:
Existentialism became a "state-of-mind" of the day. Prominent thinkers like Friedrich Nietzsche believed that sadly, life as we know it had become meaningless. BUT! It's important to find your own existence, and more importantly, to make your own morality.

Friedrich Nietzsche
Nietzsche's most famous work was that of "The Gay Science", in which one of the chapters depicts a "mad man" raving about the fact that God himself was indeed, dead. Read it below and provide your interpretations, summaries, or general emotions toward the piece on the Padlet.

THE MADMAN----Have you not heard of that madman who lit a lantern in the bright morning hours, ran to the market place, and cried incessantly: "I seek God! I seek God!"---As many of those who did not believe in God were standing around just then, he provoked much laughter.

Has he got lost? asked one.
Did he lose his way like a child? asked another.
Or is he hiding?
Is he afraid of us?
Has he gone on a voyage?
Emigrated?---

Thus they yelled and laughed.

The madman jumped into their midst and pierced them with his eyes.

All of us are his murderers. But how did we do this? How could we drink up the sea? Who gave us the sponge to wipe away the entire horizon? What were we doing when we unchained this earth from its sun? Where is it moving now? Where are we moving? Away from all suns? Are we not plunging continually? Backward, sideward, forward, in all directions? Is there still any up or down? Are we not straying, as through an infinite nothing? Do we not feel the breath of empty space? Has it not become colder? Is not night continually closing in on us? Do we not need to light lanterns in the morning? Do we hear nothing as yet of the noise of the gravediggers who are burying God? Do we smell nothing as yet of the divine decomposition? Gods, too, decompose. God is dead. God remains dead. And we have killed him.

"How shall we comfort ourselves, the murderers of all murderers? What was holiest and mightiest of all that the world has yet owned has bled to death under our knives: who will wipe this blood off us? What water is there for us to clean ourselves? What festivals of atonement, what sacred games shall we have to invent? Is not the greatness of this deed too great for us? Must we ourselves not become gods simply to appear worthy of it?”

Here the madman fell silent and looked again at his listeners; and they, too, were silent and stared at him in astonishment. At last he threw his lantern on the ground, and it broke into pieces and went out.

This tremendous event is still on its way, still wandering; it has not yet reached the ears of men. Lightning and thunder require time; the light of the stars requires time; deeds, though done, still require time to be seen and heard. This deed is still more distant from them than most distant stars---and yet they have done it themselves.

It has been related further that on the same day the madman forced his way into several churches and there struck up his requiem aeternam deo [funeral song for the “eternal God”]. Led out and called to account, he is said always to have replied nothing but:

"What after all are these churches now if they are not the tombs and sepulchers of God?" 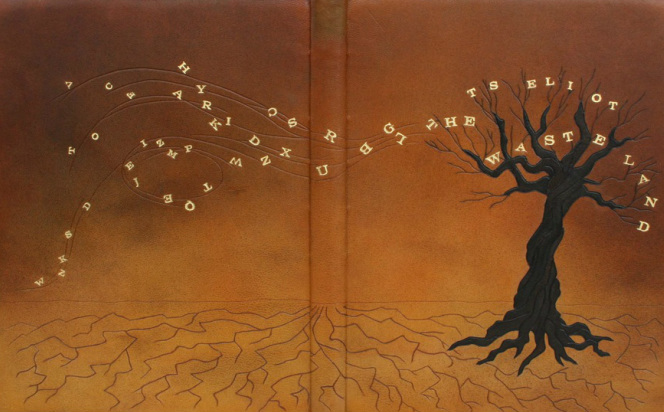 And then there were those who let the madness run wild. Surrealism made its way into the realm of literature as well. The following excerpt is taken from The New Yorker Magazine:Surrealist writers aimed at "automatic writing", and did so, with varying degrees of success. Co-authors Andre Breton and Phillipe Soupault’s penned "The Magnetic Fields,” and you can see the oddity of automatic writing below:But the perfect "Age of Anxiety" text seems to be that of T.S. Eliot's Wasteland. Read the excerpts below and provide your interpretations, summaries, or general emotions toward the piece on the Padlet.
April is the cruelest month, breeding Lilacs out of the dead land, mixing memory and desire, stirring dull roots with spring rain. Winter kept us warm, covering Earth in forgetful snow, feeding a little life with dried tubers....

What branches grow out of this stony rubbish? Son of man, you cannot say, or guess, for you know only a heap of broken images, where the sun beats, and the dead tree gives no shelter, the cricket no relief, and the dry stone no sound of water. Only there is shadow under this red rock, (Come in under the shadow of this red rock), And I will show you something different...

Unreal City, under the brown fog of a winter dawn, a crowd flowed over London Bridge, so many, I had not thought death had undone so many. Sighs, short and infrequent, were exhaled, and each man fixed his eyes before his feet....I saw one I knew, and stopped him, crying,

“Stetson! You who were with me in the ships at Mylae!
That corpse you planted last year in your garden, as it begun to sprout? Will it bloom this year?
Or has the sudden frost disturbed its bed?
Oh keep the dog far, or with his nails he’ll dig it up again!
You! hypocrite lecteur!--mon semblable,—mon frère!” [TRANSLATION: Reader! You're a hypocrite! My fellow! My brother!]
My nerves are bad to-night.
Yes, bad.
Stay with me.
Speak to me.
Why do you never speak?
Speak.
What are you thinking of?
What thinking?
What?
I never know what you are thinking.
Think.”

I think we are in rats’ alley where the dead men lost their bones.

“What is that noise?”

The wind under the door.

“What is that noise now? What is the wind doing?”

I remember those are pearls that were his eyes.

"Are you alive, or not? Is there nothing in your head?”

But O O O O that Shakespearean Rag-- It’s so elegant so intelligent.

“What shall I do now?
What shall I do?
I shall rush out as I am, and walk the street with my hair down, so.
What shall we do tomorrow?
What shall we ever do?”
Who is the third who walks always beside you?
When I count, there are only you and I together.
But when I look ahead up the white road there is always another one walking beside you,
Gliding, wrapt in a brown mantle, hooded.
I do not know whether a man or a woman —
But who is that on the other side of you?
What is that sound high in the air murmur of maternal lamentation?
Who are those hooded hordes swarming over endless plains,
Stumbling in cracked earth
Ringed by the flat horizon only
What is the city over the mountains
Cracks and reforms and bursts in the violet air
Falling towers
Jerusalem Athens Alexandria
Vienna London
Unreal
Then spoke the thunder

DA Datta: What have we given?