Rock the Vote!
The History of the
American Voting Project 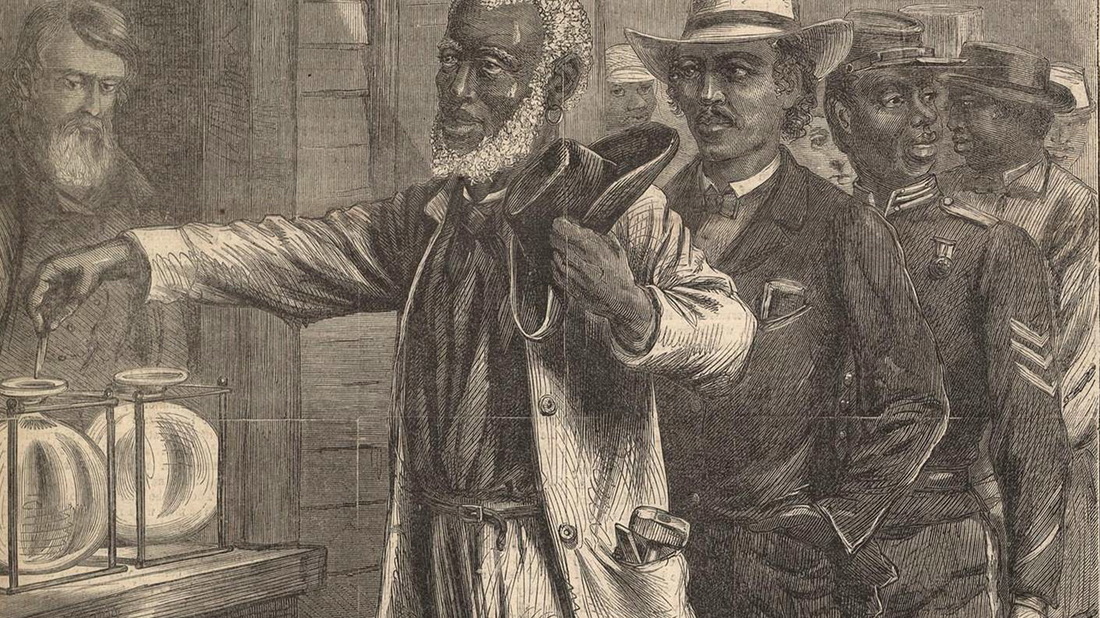 Citizens of the United States have voted in 56 presidential elections since the nation's founding, and in 2016, will vote, again, in its 57th. But how many people "show up" to vote in these elections?
In recent elections, politicians, economists, and your neighbors (with their yard signs...) have tried to get people to show up to vote. Regardless, despite best efforts, participation in presidential elections have hovered between 50% and 60% for the past three decades.

But has it always been this way? It seems as if voting has lost is "privileged status"; it's become more of a "chore", akin to going to the dentist or paying your taxes, than a patriotic expression of loyalty to one's country or a spiritual act that conjures memories of the sacrifices ancestors made to provide for the ballot opportunity in front of you.

This activity will answer the essential questions:

#3 is where you'll need to be make your own opinions with the information given. You'll be reading through some information looking for the "freedoms provided" and/or the "limitations experienced" and creating a score from 0-9 for the voting "openness" or "closed-ness" during this time period. For example, if, during this specific time period, black males are allowed to vote, that would make for a pretty "free" voting experience for the nation as a whole when compared with previous era. Conversely, if during this period, blacks still had to take literacy tests and pay a poll tax, that "freedom" would be reduced. You'll have a choose a "score" to give this period, on a scale of 0-9. Then, you'll have to explain your reasoning for why you gave this score. 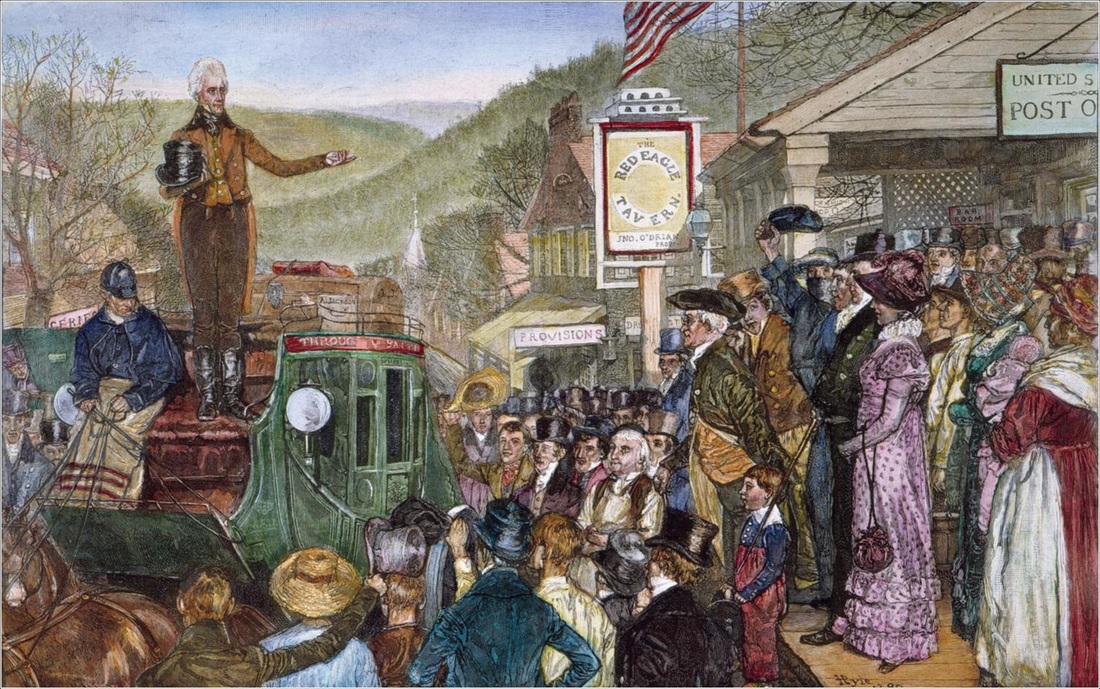 Firstly, plot the voter turnout % shown below. Note that for the sake of time and the clarity of data, voter turnout % is shown for every other election, and not every four (4) years.
Prior to the Jacksonian Period of the 1820s, 1830s, and 1840s, laws required that voters either own a certain amount of land or personal property, or pay a specified amount in taxes. In other words, only the rich, white men of the country could vote. But that would change with President Andrew Jackson...

During the first half of the 1800s, the election process changed dramatically when voting by voice was replaced by voting by written ballot. Before this period, people would "speak" their voting decisions to a voting official, but as one could imagine, often times the act of "speaking", rather than secretly "writing", would be nerve-wracking and subject to voter intimidation and peer-pressure. Just think: How hard would it be for you to tell me your opinions on birth control, immigration, gay marriage, etc., rather than to write them secretly? 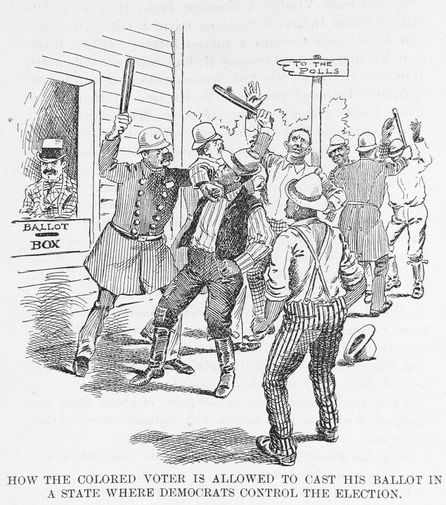 Firstly, plot the voter turnout % shown below. Remember, for the sake of time and the clarity of data, voter turnout % is shown for every other election, and not every four (4) years.
After the Civil War, and by 1870, Abraham Lincoln and the Congress passed three amendments that gave black people rights, and black men the right to vote. However, though the Fifteenth Amendment gave blacks the right to vote, a variety of methods -- including violence in which hundreds of African-Americans were murdered, property qualification laws, and fraud -- were used by Southern whites to reduce the level of black voting.

Then, in 1890, Mississippi created new methods to prevent African-Americans from voting. Through lengthy residence requirements, poll taxes, literacy tests, property requirements, exhausting registration procedures, and laws that blocked even the most minor of criminals from voting, Southern states drastically reduced black voting. In Mississippi, just 9,000 of 147,000 African-Americans of voting age were qualified to vote. In Louisiana, the number of black registered voters fell from 130,000 to 1,342. The .GIF below shows the "expansion" of poll taxes and other voting restrictions throughout the South until they were ultimately banned in the mid-1960s, 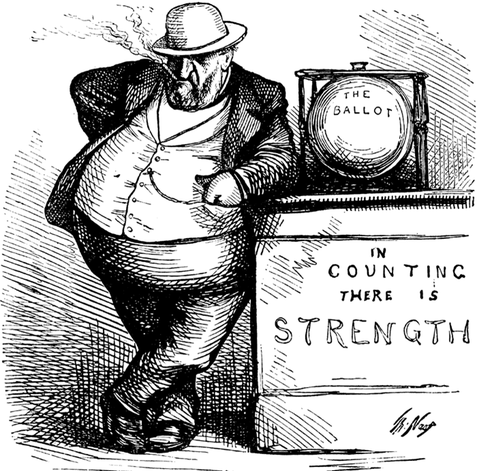 Firstly, plot the voter turnout % shown below. Remember, for the sake of time and the clarity of data, voter turnout % is shown for every other election, and not every four (4) years.
Fears of corruption and of illegal voting activities led a number of Northern and Western states to enact "reforms" similar to those in the South. Reformers were especially troubled by big-city machines that paid or promised jobs to voters. The cartoon above references the infamous "Boss" Tweed whose political organization ran New York City well into the 1920s. 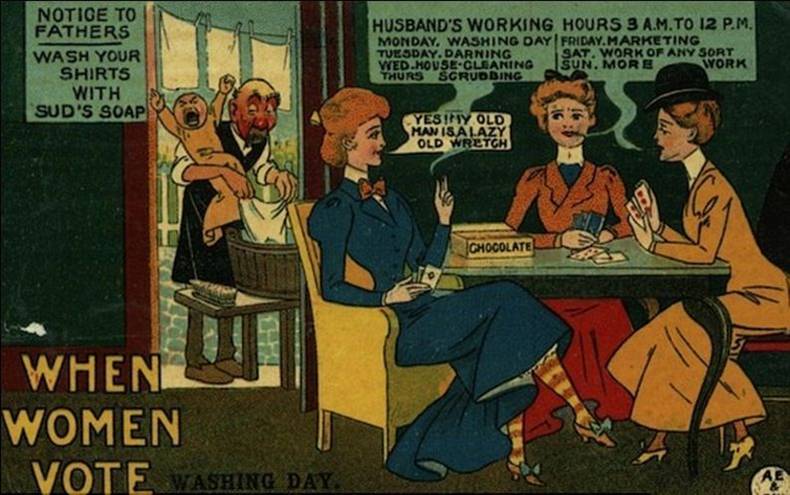 Firstly, plot the voter turnout % shown below. Remember, for the sake of time and the clarity of data, voter turnout % is shown for every other election, and not every four (4) years.
At the end of the 1950s, (7) Southern states (Alabama, Georgia, Louisiana, Mississippi, North Carolina South Carolina, and Virginia) used literacy tests to keep blacks from voting, while (5) states (Alabama, Arkansas, Mississippi, Texas, and Virginia) used poll taxes to prevent blacks from registering. In Alabama, voters had to provide written answers to a 20-page test on the Constitution and on state and local government.

But in the 1960s, everything changed. In 1965, two major "steps forward" occurred that helped protect the voting rights of black Americans. On January 23, 1965, the Twenty-fourth Amendment to the Constitution barred poll taxes in federal elections. At the time, (5) Southern states still had a poll tax, similar to one shown above from the state of Mississippi. 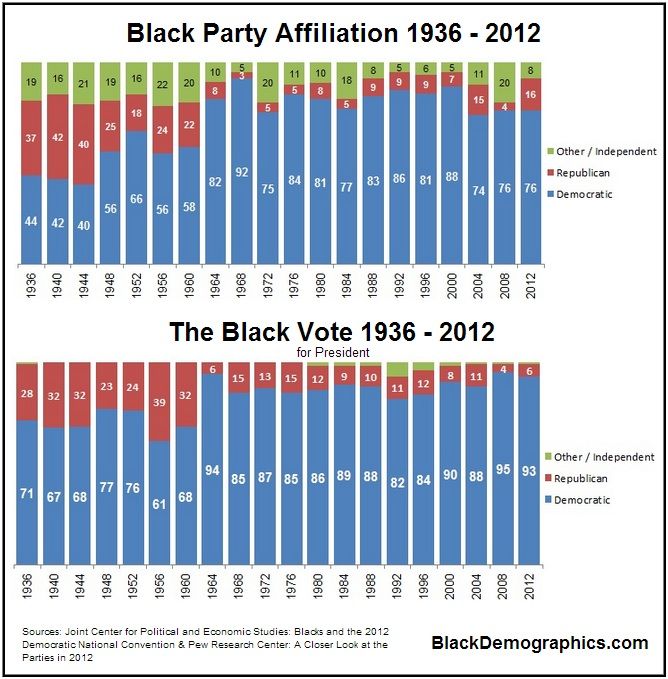 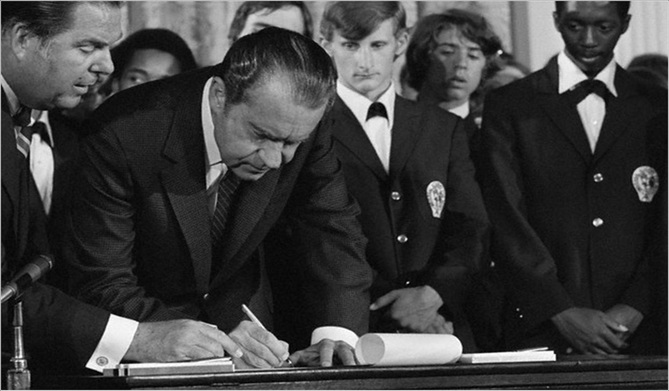 Firstly, plot the voter turnout % shown below. Remember, for the sake of time and the clarity of data, voter turnout % is shown for every other election, and not every four (4) years.
In his State of the Union Address in 1954, President Dwight Eisenhower suggested the lowering of the voting age to 18.  A few decades later, the war in Vietnam fueled the notion that young people who were young enough to die for their country were old enough to vote. In 1970, as part of an extension of the Voting Rights Act, President Richard Nixon (shown above) lowered the voting age to 18, an act which was formally added to the Constitution as the Twenty-Sixth Amendment. And since the 1990s, voting "openness" has settled completely, despite the fact that only 50 - 60% of people vote in presidential elections...

The history of voting rights is not yet over. Even today, debate continues. One of the most heated debates is whether or not convicted felons ("criminals") who have served their time be allowed to vote. Today, a handful of states bar convicted felons from voting unless they successfully petition to have their voting rights restored. This issue affects felons in all states (shown below, left), but as you can see, since a vast majority of felons are black (shown below, right), this issue significantly concerns the votes of black Americans in general 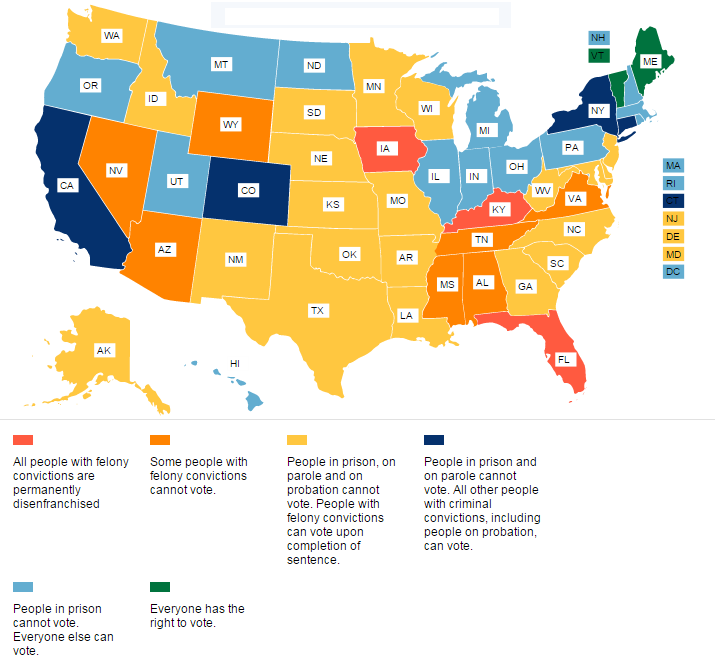 Another issue is the further reduction of voting age to 16 or 17, perhaps. Why? Because young people want to vote! They can drive...why not vote? In the Summer of 2014, Scots voted on whether or not "break away" from the United Kingdom and become an "independent nation". And for the first time, voting rights were extended to 16 and 17 year-olds as well as those 18 and above. Though the "NO" side won and Scotland remained united with England, Wales, and Northern Ireland, the larger issue may be seen below.

When asked if they planned to vote in the upcoming Scottish independence vote, 16 - 17 year-olds responded: 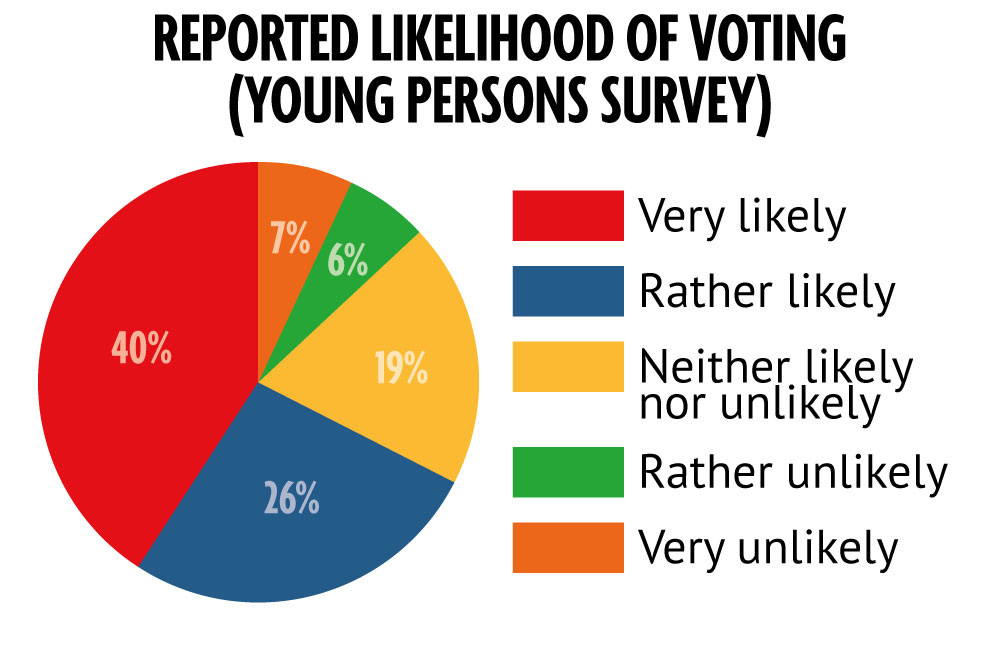 Additionally, when asked if they would continue to vote in the future, 97% said yes! And as you can see, their votes do count and they are very different from the votes of the elderly. And shouldn't this voice be counted with the opinions of others? 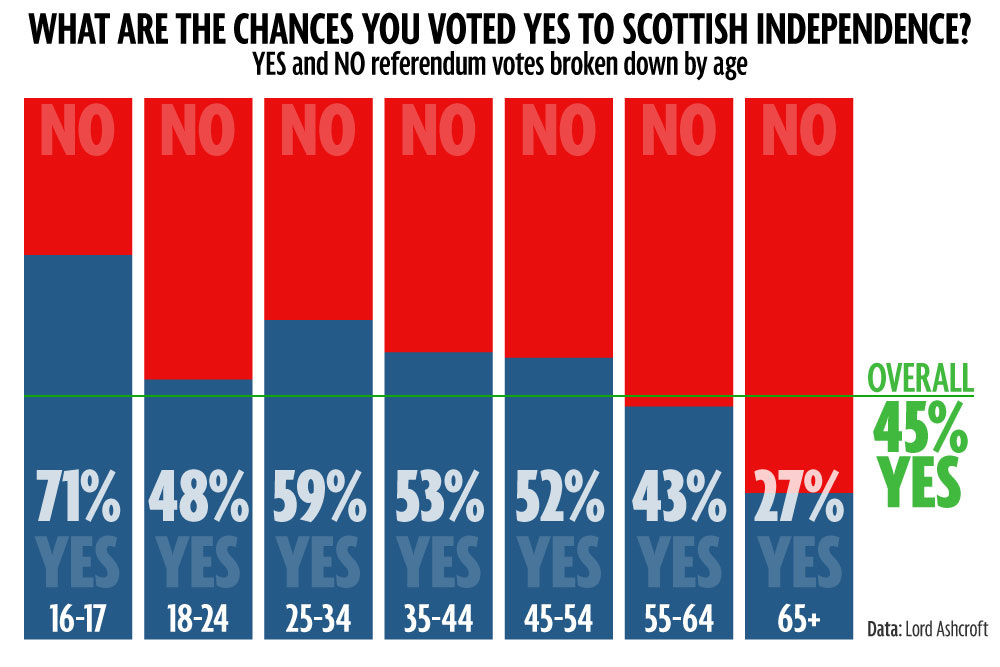 It's an interesting debate - how do you get young people to vote? - and we'll discuss this later!