Obamacare:
Assessing the Legacy of President Obama through his Flagship Legislation...
...And What the Republicans
​Need to Do to Fix It 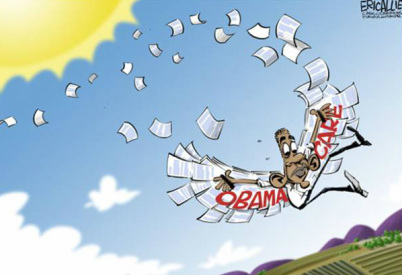 In March 2010, Barack Obama signed into law the Affordable Care Act, otherwise known as "Obamacare". A year later, the Supreme Court defended and approved the Federal Government's right to enact this legislation, citing its powers of taxation of revenue.

William Galston, a key political adviser in the Clinton Administration, is quoted as saying, "The A.C.A. (Obamacare) is the signature achievement of his Administration and one of the biggest promissory notes ever handed to the American people. It's not only his moral obligation to deliver on this promise, but an absolute political necessity."

But, as the years went on, Obamacare's problems started to surface, so much so that president-elect Donald Trump vowed to "repeal and replace Obamacare with something terrific" if he were to be elected. Why does he want to replace it? And with what system? Before we answer that, we need to understand, first:

Using your provided sheet, answer the questions below.

Part I:
The "Need"
for Obamacare 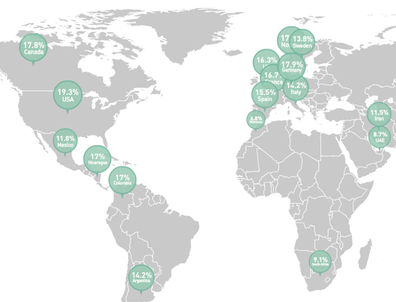 Health Care Expenditure as a % of GDP.

As compared with other nations, the United States spends the most money on health care, but has fewer doctors and shorter life expectancies. 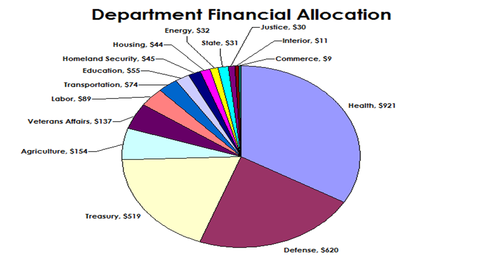 Annual governmental expenditure based on financial allocation to each federal department.

Additionally, the spending on health care totals close to by over $1 trillion and exhibits no sign of slowing down.
So...there's a problem here: The government spends more money, but we have fewer doctors and shorter life expectancies. Additionally, if the government is spending all this money, when then is health care so darn expensive?

TIME Magazine covered this very issue in March 2013. The title of the featured article was called "The Bitter Pill: Why Medical Bills are Killing Us" and explores the problems with the current health care system. To be able to understand the need for Obamacare, we must start by understanding why health care was broken in the first place.

Read excerpts from the article below and answer the accompanying questions. 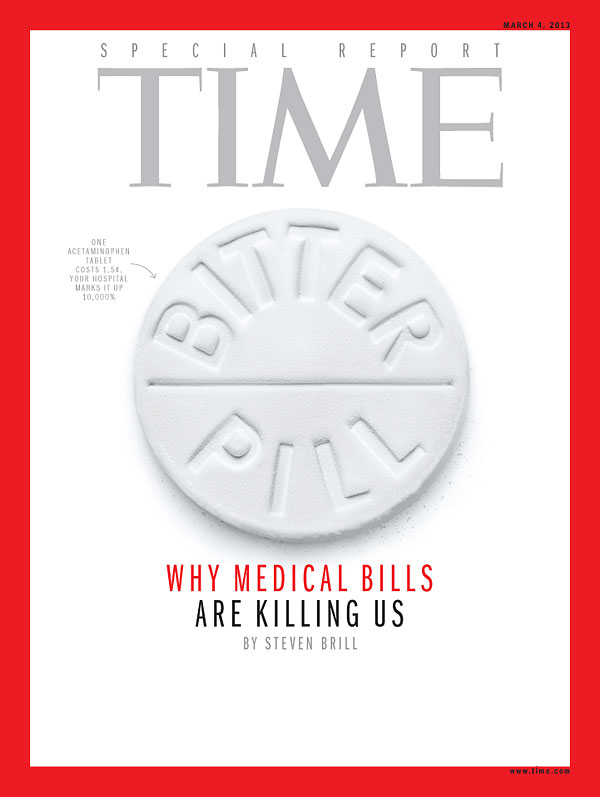 In the 1930s, Franklin Roosevelt created the Social Security Administration to help those in need of government support through unemployment relief, retirement savings, and basic health care services. During World War II, the federal government "froze" the profits of private businesses, but allowed these same businesses to attract and retain employees by offering certain "benefits", such as health insurance. In the 1960s, Lyndon Johnson created the Medicare system (which later expanded into Medicaid in the 1980s) to help the elderly and the poor pay for health care. And today, we find that not much has changed. Read the excerpts below:

Government expenditures as a % of GDP.
3.     If you add it up, the federal government spends $800 billion per year to cover approximately 90 million people (1/3 of our country's population). That's a lot of people and a lot of money! But that's not the issue. What's one thing you've learned about Medicare / Medicaid that's "problematic"?

So far, we've learned that the United States allocates approximately 20% of its budget to health care. We've also learned that Medicare / Medicaid covers about 90 million people and costs $800 billion per year. So, with all this spend, why are medical bills so high? That's what this article set out to answer. Let's start with the graphic below. 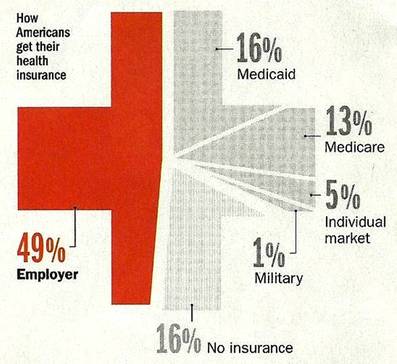 Most Americans get their health care from their "employer", meaning that their employer "pays" most of their monthly bill, or "subscription" to health care, and just charges the employee a smaller fee. This "smaller fee" can vary: A public school teacher, for example, might pay $15 per month for health care while their school district picks up the rest of the bill. Conversely, a businessman in a private business (Starbucks, for example...) might pay $200 to $300 per month. It all depends.

Let's continue to read excerpts from the article and try to answer why health care is so expensive. 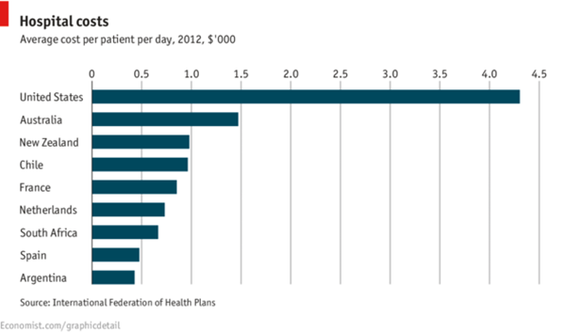 5.     ...but that's NOT that! We'll deal with it later, but for now, summarize the problems that surround the cases of the D.'s and the Recchi's.

6.     So...what is a "write off"? What does it to do the government? (NOTE: ...and if you're smart, can you see how this "indirectly" leads to higher medical prices? Because the bills aren't gettin' paid!)

7.     What is a "chargemaster"? Why is it "problematic"?
8.     These charges for alcohol prep pads, diabetes testing strips, and others...aside from the price of a CT scan...are just ridiculously high. ANALYSIS: Can you predict why?

Are there other reasons why medical bills are so high? The answer....YES!

By now, we've seen that Medicare / Medicaid covers about 90 million people, and that one of the biggest problems is that hospitals don't get PAID enough in return! Hospitals run a deficit and this deficit is passed on to the federal government. Perhaps that's why they charge so much for tests, testing strips, and alcohol pads. Another problem we see is that, quite frankly, Americans have TOO MUCH health care! Read below:

9.     It seems like one of America's biggest problems is the number of "tests" we require. But it might not be the doctors' fault! Why do doctors use so many tests?

Trillions spent. Billions in write-offs. Thousands of dollars in medical bills. Someone must be profiting off this, right? Read below:

Now, this article is NOT arguing that doctors and hospitals should not be paid, nor should they collect as much money as possible! After all, they do save lives! And also, remember that so many prices are "inflated" to cover the "write-offs" and "discounts" they offer. BUT! Let's record some data and answer some questions.

10.     What was MD Anderson's profit? Stamford's?
11.     "Profits" can be cyclical. If a hospital makes significant profit, what then do they do with that money? And in turn, how does this make MORE profit?
12.     How do medical devices and machines make doctors profits as well?

Remember: the goal of this activity was to see what Obamacare WANTED TO FIX! Next class, we'll look at the Republican plan to fix Obamacare​! But, for now: Complete the "fill-in" story on your provided sheet.