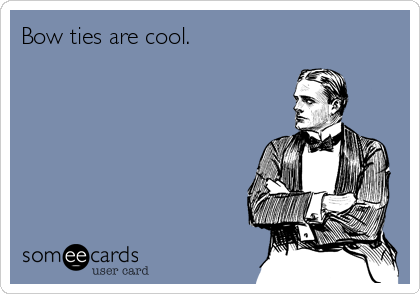 For this activity, we will be using the metaphor of a bow tie: two (2) "sides" with a "knot" in the middle. But remember, though it has two (2) "sides", it comes from one tie only! The point of the metaphor is that there is a theme of a tie: religion, politics, the masses, the role of women, etc. And there are "conflicting opinions" on the theme. You'll understand more as we continue. But for now, just envision the "bow tie"...

The years of the Sixteenth and Seventeenth Centuries were dominated by the theme of absolutism. And out of this theme came the following prevailing thoughts:

In what ways were these thoughts "challenged" during the Enlightenment era? 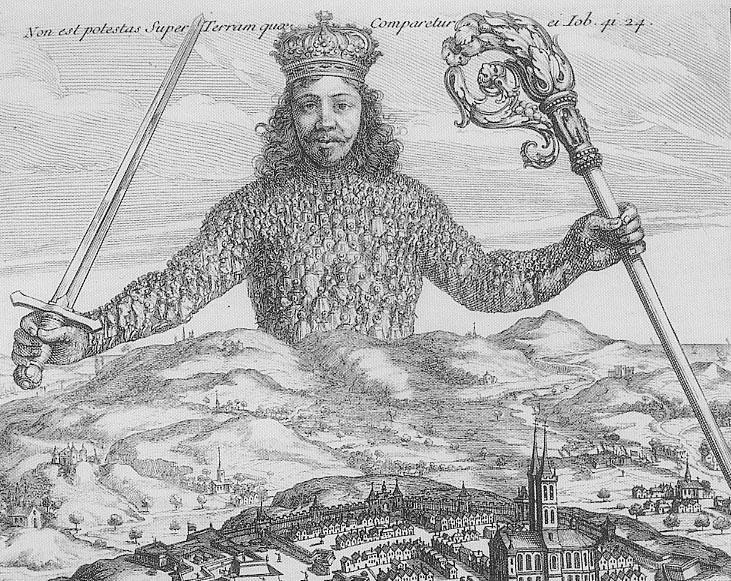 We can use the above image to reference thought of the absolute king: pure, unchecked power. In fact, the image above comes from a book written by Thomas Hobbes called The Leviathan in which he imagines the perfect society run by an absolute ruler. How did political thoughts change from the pre- to the post-Enlightenment period? Let's examine the following texts:

Memoires (of Louis XIV), by Voltaire

The Second Treatise on Government, by John Locke

Question: Both Voltaire and John Locke go into detail about how "politics" should be run. Yet, there are two "sides" to this bow tie: How did political thought change from the pre- to the post-Enlightenment period? 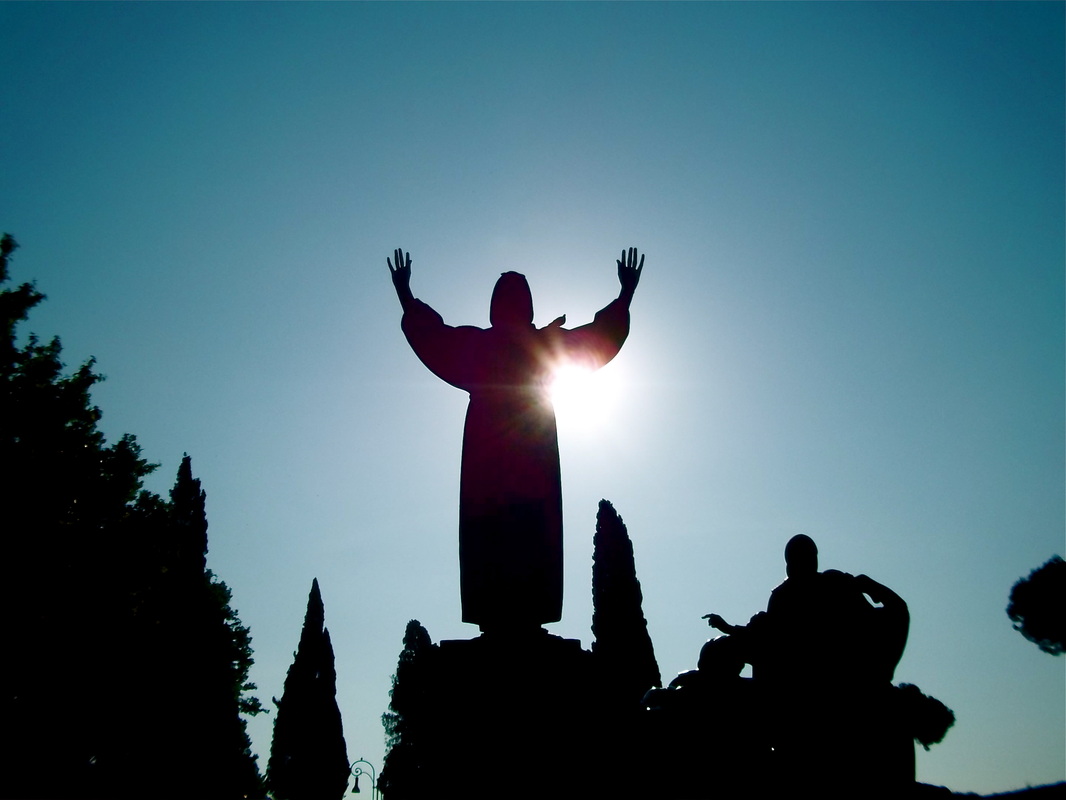 We can use the above image to reference thought of the pervasiveness of religion: dominant, power-bequeathing, and war-inducing. And even after the fateful year of 1517, religion remained very much a part of everyday life. Yet, in the Enlightenment period, its social construction was challenged. How did religious thoughts change from the pre- to the post-Enlightenment period? Let's examine the following texts:

No longer coy,
Close now, if it’s your wish;
Rend the fabric
Of this sweet encounter

Of life eternal tasting
And every debt redeeming;
In slaying, all death to life
You’ve turned.

O lanterns of fire,
Light whose resplendent rays
The deepest caverns of sense,
Erstwhile dark and blind,
Warmth, with curious care,
And light together
Give to its beloved.

How gentle and how loving
You wake up on my breast,
Where secretly you alone dwell,
And with your tempting breath,
Goodness and glory filled,
How delicately my love
You inflame me!

This rigid chain of bodies, minds, and worlds.
Dreams of the bloodless thinker are such thoughts.
God holds the chain: is not himself enchained;
By indulgent choice is all arranged;
Implacable he's not, but free and just.
Why suffer we, then, under one so just?
Question: Voltaire, again, is the "featured player" here, and goes into detail about how "religion" is not exactly what the "Church", in the form of Loyola and others, is selling. There are two "sides" to this bow tie. How did religious thought change from the pre- to the post-Enlightenment period?

Part III: "The Debate About Women" 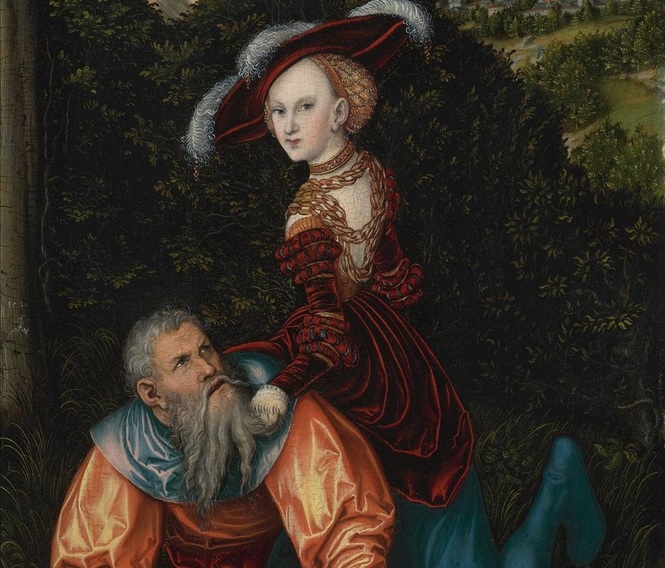 We can use the above image to reference thought of the devilishly-domineering dominion that women (...supposedly...) had over men prior to the Enlightenment period. From the Renaissance to the Absolutist periods, women, and their value in society, were kept at arm's length out of both fear and ignorance. How did "the debate about women" change from the pre- to the post-Enlightenment period? Let's examine four texts this time, all of which detail with Enlightenment thought in relation to the "debate about women". The first text deals with the ideas of enlightened thought for the masses. It just provides anecdotal evidence for the point of "enlightening the masses". The second, third, and fourth texts deal with the role of women in society. Rousseau's text, though written in the Late Eighteenth Century, will serve as the "absolutist thought" from which the "bow tie" must "flip". The Third and Fourth texts, by de Beaumer and Macaulay will be the "flip" texts...

Outlines of an Historical View on the Progress of the Human Mind, by Nicolas de Condorcet

Letters on Education, by Catharine Macaulay

Question: Rousseau is certainly not misogynistic or an advocate of the "Witches Hammer"-theory. Yet, his writings seems to keep women confined to their traditional gender roles. There are two "sides" to this bow tie. How did "the debate about women" change from the pre- to the post-Enlightenment period?

Remember that artistic movements have no definite "starting" or "stopping" points. But, we do see a "bow tie flip" between Baroque art of the past, and Rococo art of the present​! If anything, at least the color palette has changed!

How did "artistic creativity" change from the pre- to the post-Enlightenment period? Let's examine some of the original thoughts on the Baroque style of art​.
So, now let's see how the "bow tie flipped" from Baroque art to Rococo art​. 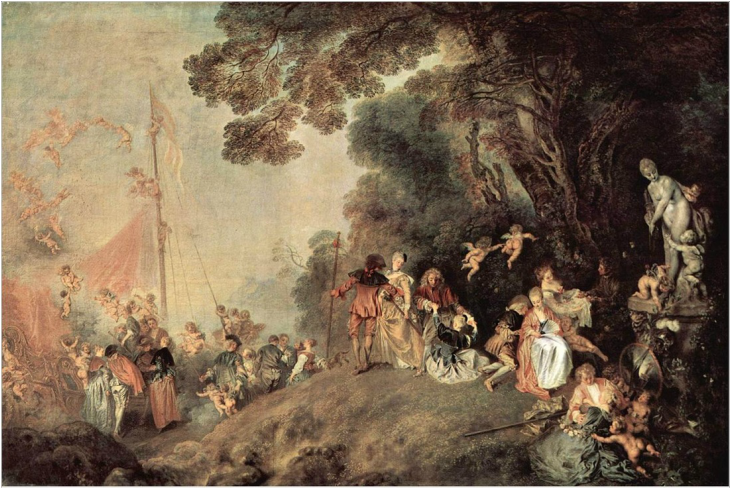 Jean-Antoine Watteau, A Journey to Cythera, 1717
...and some "zoomed in" parts of the painting 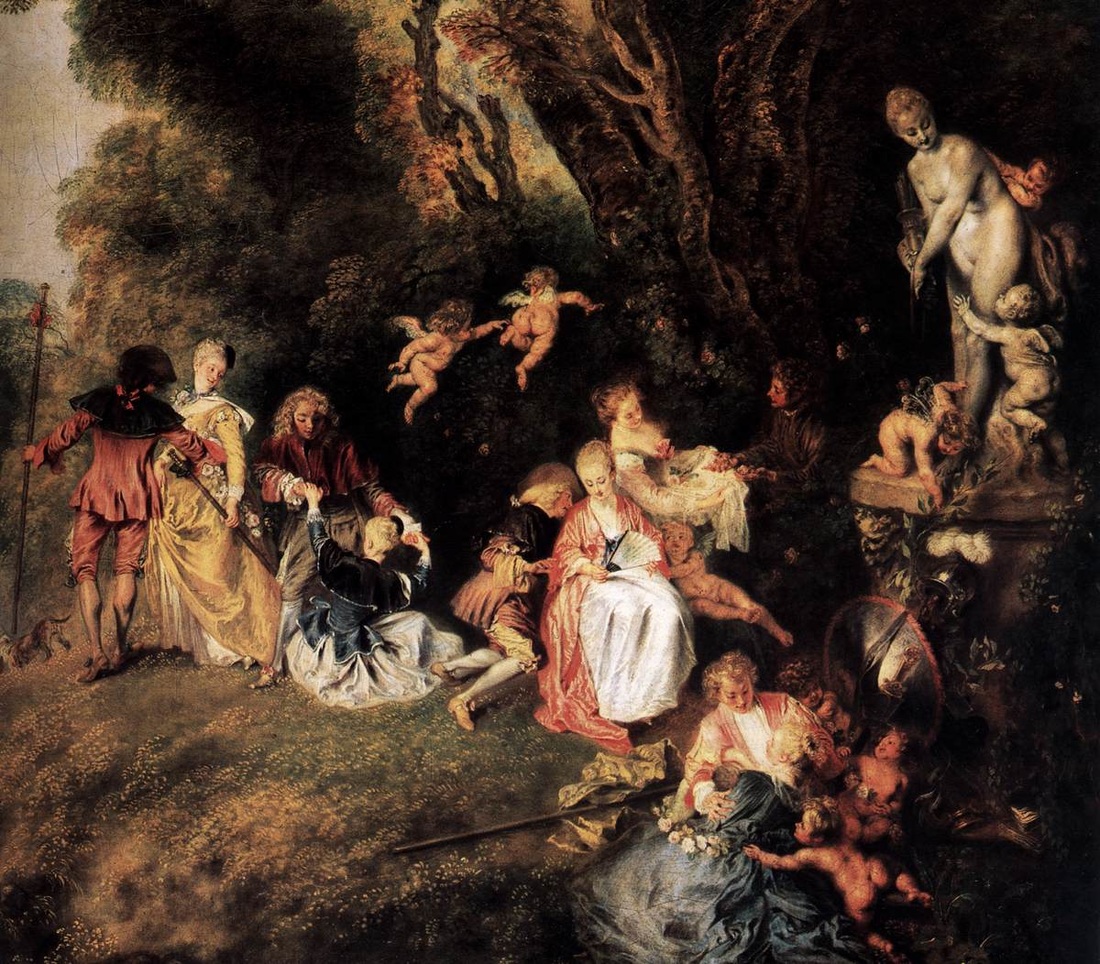 Question: Baroque art, and especially its music, didn't "die" during the Enlightenment period, but it seems as artistic expression and creativity was at least "tweaked". There are two "sides" to this bow tie. How did "artistic creativity" change from the pre- to the post-Enlightenment period?