American Immigration
The "Status Quo", the Current Problems,
The Solutions Offered, and the
​Impacts on Global Economics 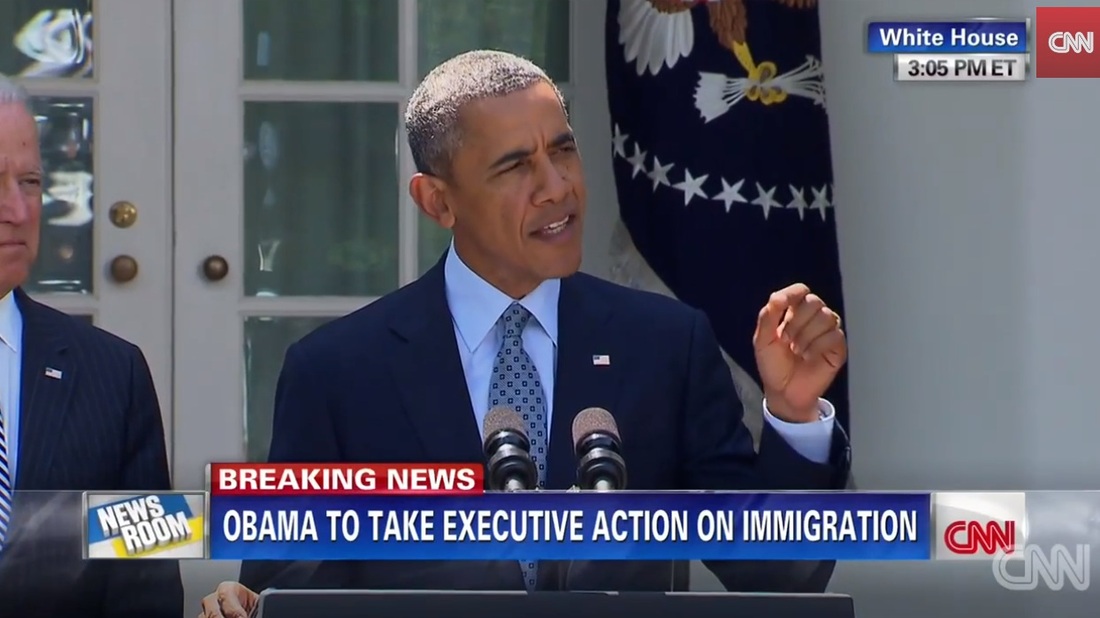 On November 20, 2014, President Obama issued an executive order that formally protected 5.5 million undocumented citizens from deportation. Instead, it gave them 3 years to "make a path" for themselves, either toward citizenship, or towards the workforce.

Obama has said that once of the most "frustrating parts of [his] presidency" has been the lack of progress made in the areas of immigration. Current estimates say that there are an estimated 12 million people, living in the United States without proper citizenship or documentation papers, and there are a variety of problems, additionally, with the legal citizenship process.

So, what should we do? We firstly have to start with the citizenship process: the "status quo" (current state) of becoming a citizen.

Part I: The "Status Quo"

Because this part of the activity is the "Analysis Part", to be used later for the "Evaluation Part", you might wanna "jot down some notes", using the "K, What? So, What? Now, What?"-approach...
TIME Magazine provides a great graphic for the current system, the status quo, of immigration and naturalization. Examine the graphic below, and click on it to make it bigger! 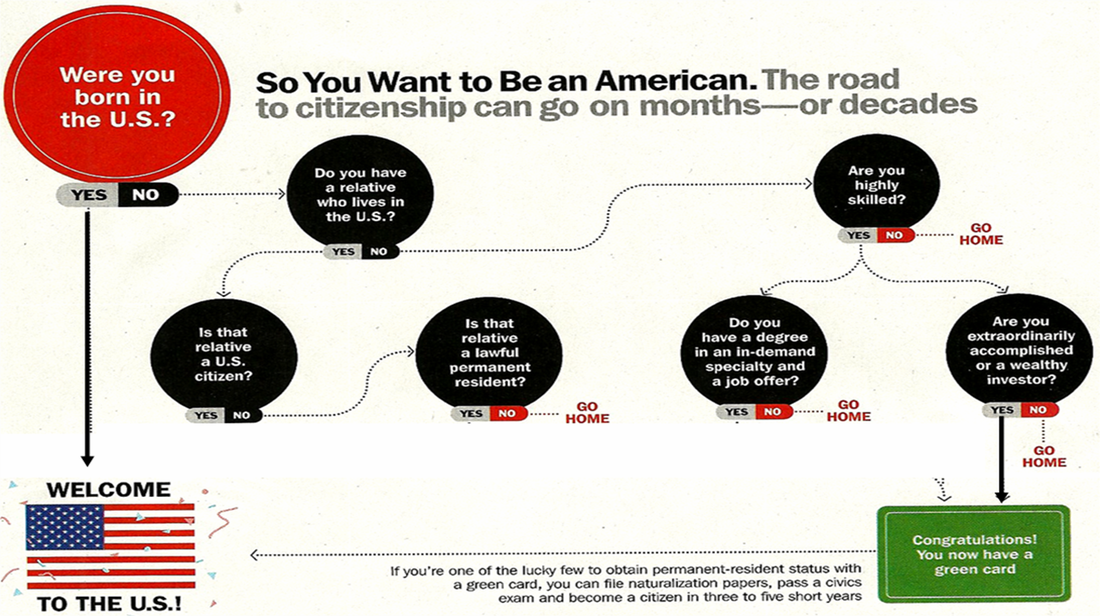 We know, that if you're born here, you're good. But it seems as the best way to get to a green card is through which route?﻿ 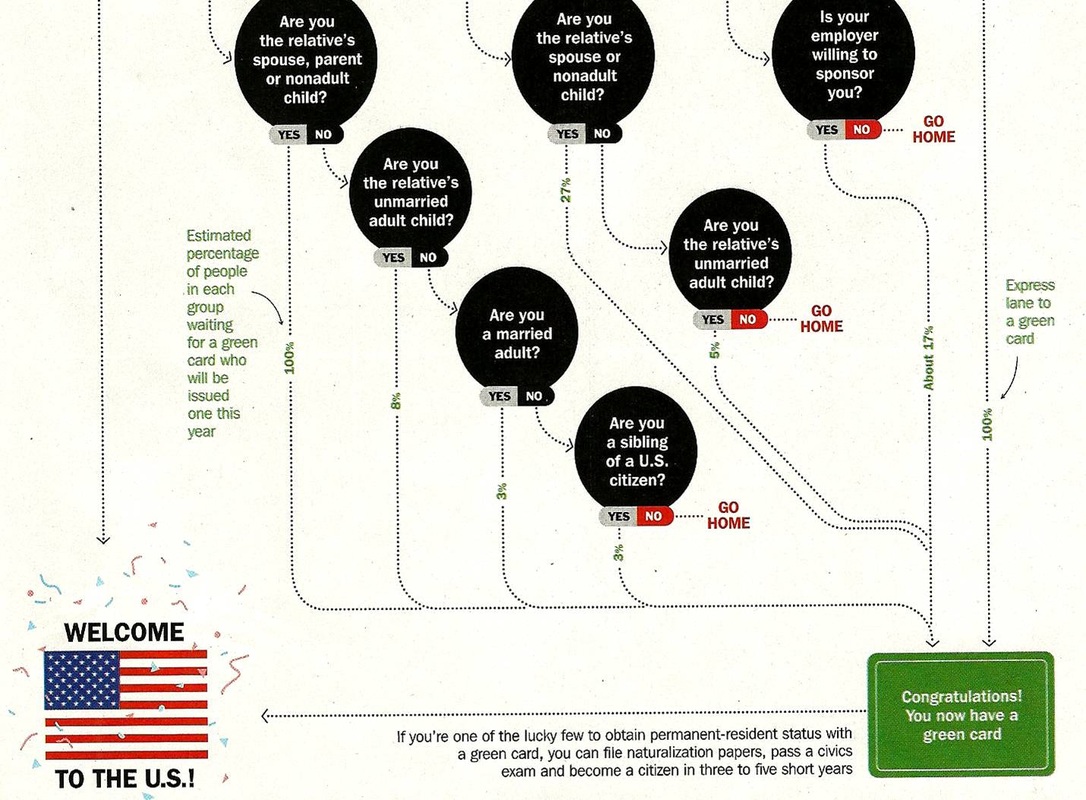 CONSIDER this QUESTION: From purely a "family connection", what's your greatest percentage odds of getting into the United States?

Now, let's look at a graphic from the New York Times regarding proposed solutions to the problem. Then answer the questions below. 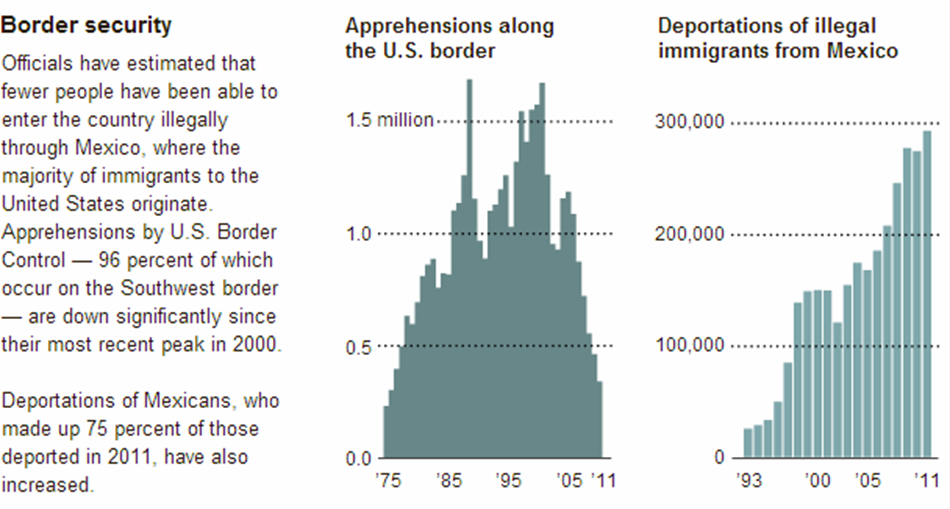 QUESTION to CONSIDER: What conclusion can you make about the first set of data regarding "Border Security"?﻿﻿

QUESTION to CONSIDER: What conclusion can you make about the second set of data regarding "Economic Realities" and why immigration has declined in the past few years?﻿﻿ 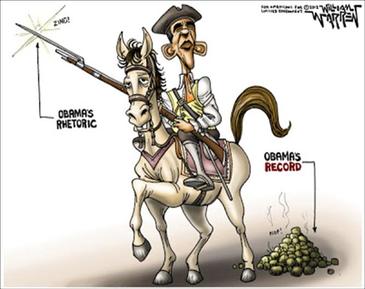 Regardless, unless things change, all of this is simple rhetoric: strong and emotional words that can convince people of "greatness", but in the end, might not deliver on the promises. And again, if we refer back to the issues of deportation, then it seems like Obama's immigration "legacy" is tarnished.

Part II: "Not Legal, Not Leaving":
The Need for Immigration Reform 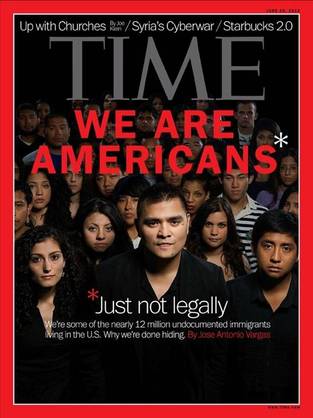 Jose Antonio Vargas chose to given an interview to TIME Magazine about his current state of "not legal, not leaving". Below are some direct quotes from his interview:

Question: 'Why haven't you gotten deported?'

That's usually the first thing people ask me when they learn I'm an undocumented immigrant or, put more rudely, an "illegal." Some ask it with anger or frustration, others with genuine bafflement.... It's a fair question, and it's been hanging over me every day for the past year, ever since I publicly revealed my undocumented status....Like many others, I kept my status a secret, passing myself off as a U.S. citizen — right down to cultivating a homegrown accent. I went to college and became a journalist, earning a staff job at the Washington Post. But the deception weighed on me. When I eventually decided to admit the truth, I chose to come out publicly — very publicly — in the form of an essay for the New York Times last June [2012].

So I waited. And waited some more. As the months passed, there were no knocks on my door, no papers served, no calls or letters from U.S. Immigration and Customs Enforcement (ICE), which deported a record 396,906 people in [the year] 2011. Before I came out, the question always at the top of my mind was, What will happen if people find out? Afterward, the question changed to What happens now? It seemed I had traded a largely hidden undocumented life in limbo for an openly undocumented life that's still in limbo. [SIDE NOTE: "Limbo" means a state of "waiting" or "constant change", but it can also mean "imprisonment"]

The contradictions of our immigration debate are inescapable. Polls show substantial support for creating a path to citizenship for some undocumenteds — yet 52% of Americans support allowing police to stop and question anyone they suspect of being "illegal." Democrats are viewed as being more welcoming to immigrants, but the Obama Administration has sharply ramped up deportations. The probusiness GOP waves a KEEP OUT flag at the Mexican border and a HELP WANTED sign 100 yards in, since so many industries depend on cheap labor.

Question: 'Why don't you become legal?'

Another lady jumped in. "You can't get a green card?"

Of all the questions I've been asked in the past year, "Why don't you become legal?" is probably the most exasperating. But it speaks to how unfamiliar most Americans are with how the immigration process works....

As Angela M. Kelley, an immigration advocate in Washington, told me, "If you think the American tax code is outdated and complicated, try understanding America's immigration code." The easiest way to become a U.S. citizen is to be born here....If you were born outside the U.S. and want to come here, the golden ticket is the so-called green card, a document signifying that the U.S. government has granted you permanent-resident status, meaning you're able to live and, more important, work here. Once you have a green card, you're on your way to eventual citizenship — in as little as three years if you marry a U.S. citizen — as long as you don't break the law and you meet other requirements such as paying a fee and passing a civics test....

To apply for a green card on the basis of family, you need to be a spouse, parent, child or sibling of a citizen. Then it's time to get in line. For green-card seekers, the U.S. has a quota of about 25,000 green cards per country each year. The wait time depends on demand. If you're in Mexico, India, the Philippines or another nation with many applicants, expect a wait of years or even decades....

The long-stalled Dream Act is the best hope for many young people. The original 2001 version would have created a path to legal status — effectively a green card — for undocumented people age 21 and under who had graduated from high school and resided in the U.S. for five years.
[SIDE NOTE: Since the article was written in July 2012, Obama has decreed, via executive order, than undocumented children can NOT be deported...]

Question: 'Why did you get your driver's license when you knew it wasn't legal?'

I addressed this question at a "civility round table" discussion awhile back.

"I don't think I belong to a special class of people — not at all," I remember telling the one questioner. "I didn't get the license to spite you or disrespect you or because I think I'm better than you. I got the license because, like you, I needed to go to work. People like me get licenses because we need to drop kids off at school and because we need to pick up groceries. I am sorry for what I did, but I did it because I had to live and survive."...

Everyday life for an undocumented American means a constant search for loopholes and back doors. Take air travel, for instance. Everyone knows that in the post-9/11 era, you can't fly without a government-issued ID. The easiest option for most people is their driver's license. Most states will not issue a license without proof of legal residency or citizenship. But a few grant licenses to undocumented immigrants, New Mexico and Washington State among them. Like many others, I had falsely posed as a Washington State resident in order to get a license.

Question: 'So, you're not Mexican?'

Though roughly 59% of the estimated 11.5 million undocumented immigrants in the U.S. are from Mexico, the rest are not. About 1 million come from Asia and the Pacific Islands, about 800,000 from South America and about 300,000 from Europe. Others come from Nigeria, Israel, pretty much everywhere. In the case of countries that don't share a border with the U.S., these are almost always people who entered the country legally — as vacationers or on temporary visas — and overstayed the time permitted.

But perception has become reality. What's cemented in people's consciousness is the television reel of Mexicans jumping a fence. Reality check: illegal border crossings are at their lowest level since the Nixon era, in part because of the continued economic slump and stepped-up enforcement. According to the Office of Immigration Statistics at the Department of Homeland Security, 86% of undocumented immigrants have been living in the U.S. for seven years or longer....

The problem is, immigration has become a third-rail issue in Washington, D.C. — more controversial even than health care because it deals with issues of race and class, of entitlement and privilege, that America has struggled with since its founding. As much as we talk about the problem, we rarely focus on coming up with an actual solution — an equitable process to fix the system....

I am still here. Still in limbo. So are nearly 12 million others like me — enough to populate Ohio. We are working with you, going to school with you, paying taxes with you, worrying about our bills with you. What exactly do you want to do with us? More important, when will you realize that we are one of you?
﻿QUESTIONS to CONSIDER
...and yes. Jose Antonio Vargas will NOT be deported under Obama's Executive Action. Click here to read the story...