Rationalizing the Triumph of Industry in Europe, 1650 - 1800, With the Social Impacts 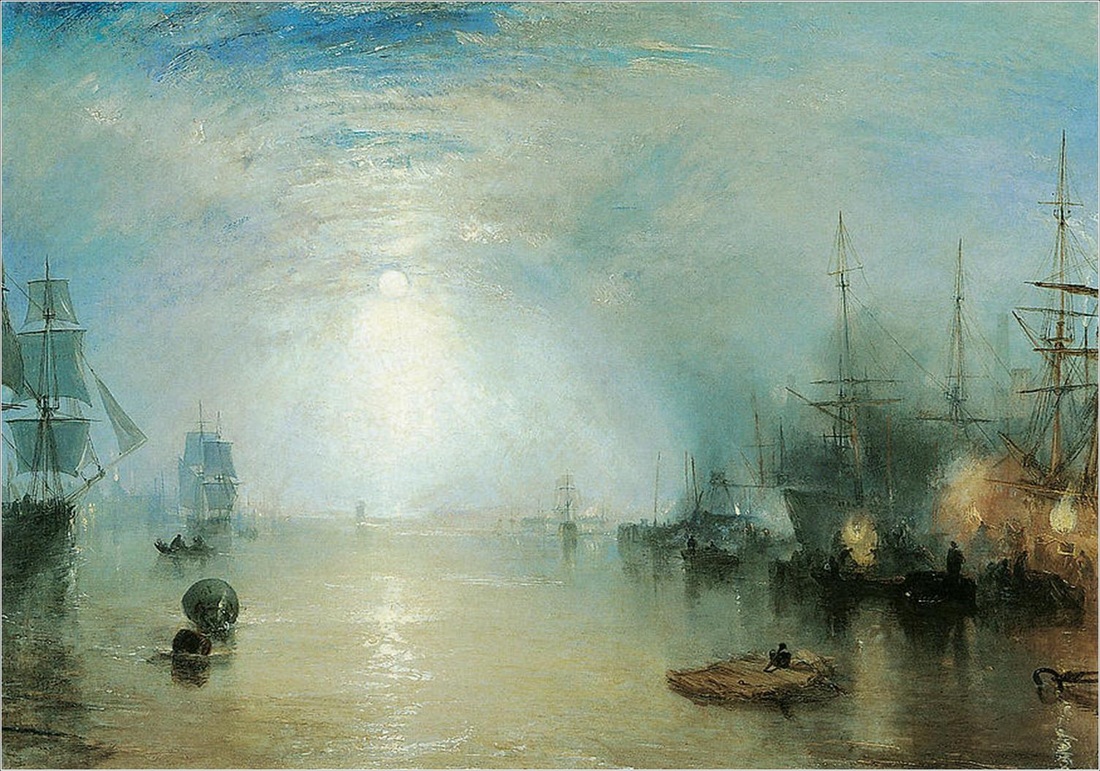 Joseph Mallord William Turner, “Keelmen Heaving in Coals by Moonlight”, 1835
Arguably the biggest societal, cultural, economic, and political change of the modern era, the Industrial Revolution made mountains out of men and legends out of legacy. It propelled Britain to the forefront of European dominance and left other nations to lie fallow in the dusts of anonymity.

But with every progress there must be an element of regress.

Essential Question: What "steps forward" were achieved by Industrialization? And which "steps backward" coupled this advent with dire struggles of simple survival?

It's an indisputable fact that Industrialization improved the life of the European populace...as a whole. Though individual classes, ethnicities, races, and genders might've suffered, the "steps forward" are evident in the following areas of focus. Let's look at the some raw data​.
Question: Why is Industrialization a “step forward”?
Answer: It allows population to grow, people to live longer, and yields a greater understanding of human processes! Additionally, industrialization brings: 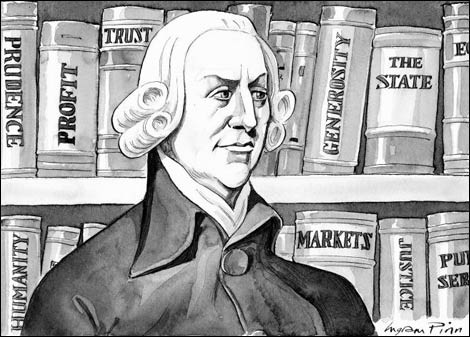 Economic philosopher Adam Smith
What did Adam Smith, in his book The Wealth of Nations, advocate? Put simply, there are a few main ideas falling under the banner of economic freedom (liberalism) and a lack of government control And it can be argued that because of Smith's theories, Britain exploded in development...
It was the British who would claim the fame of the following: 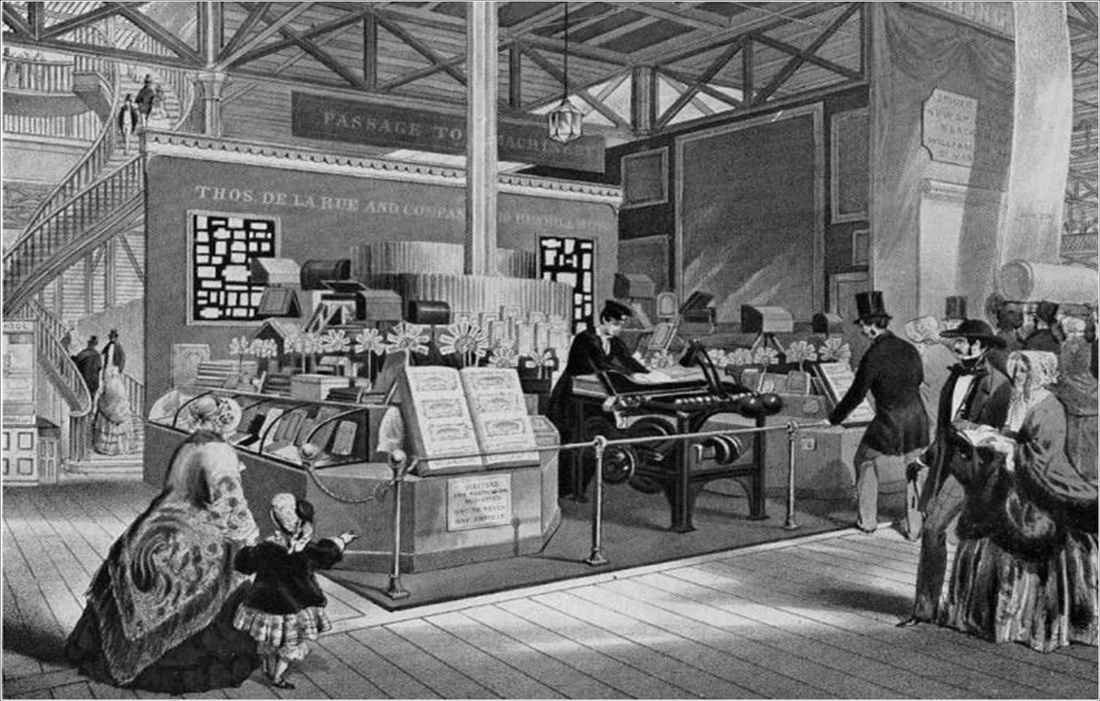 Thomas De La Rue’s “envelope machine” on display at the Great Exhibition of 1851 in London's Hyde Park
But the "step forward" for mechanized production wasn't just responsible for revolutions in the workplace. As we'll see next, mechanization was designed to

The Crystal Palace that housed the Great Exhibition in London in 1851
Yet perhaps the greatest "step forward" of Industrialization was the regional identity and national pride that resulted from the simple economic theories of "economic liberalism" and a laissez-faire economy. Put simply, industrialization allowed countries to compete on the "drawing board" - not on the battlefield. And the greatest example of this "competition was the Great Exhibition of 1851 held in London's Hyde Park. Call it Britain's "coming out" party: it took 9 months to create, featured 100,000 exhibits, and opened its doors to 6 million total visitors with some 20,000 "punching a ticket" on the first day alone! Let's read about the Great Exhibition and see what other "steps forward" are evident from such an example.

Though Industrialization may have improved the life of the European populace as a whole, its "steps backward" in the following areas cannot be overlooked:

Let's examine some of these factors up close...

I said that population, when unchecked, increased in a geometrical ratio, and subsistence for man in an arithmetical ratio...Let us now bring the effects of these two ratios together.
Among plants and animals the view of the subject is simple. They are all impelled by a powerful instinct to the increase of their species ... [But] the effects of this check on man are more complicated. [In regards to the "increase of their species], if he has a large family, will his utmost exertions enable him to support them? May he not see his offspring in rags and misery, and clamoring for bread that he cannot give them?...

The constant effort towards population [will result in the following]: The poor consequently must live much worse, and many of them be reduced to severe distress. The number of laborers also being above the proportion of the work in the market, the price of labor must tend toward a decrease, while the price of [goods] would at the same time tend to rise. The laborer therefore must work harder to earn the same as he did before. During this season of distress, the discouragements to marriage, and the difficulty of rearing a family are so great that population is at a stand...The superior power of population cannot be checked without producing misery or vice... 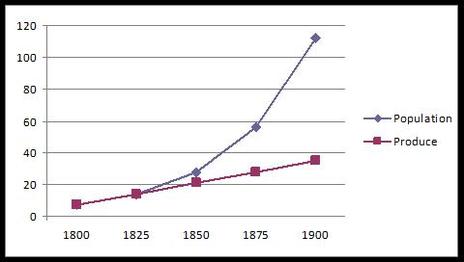 Naturally, with such a population increase during these so-called "good times", one can expect the consequences of overcrowding and ill-fit dwellings. Friedrich Engels, a German historian and economist, when visiting the English city of Manchester, said the following: 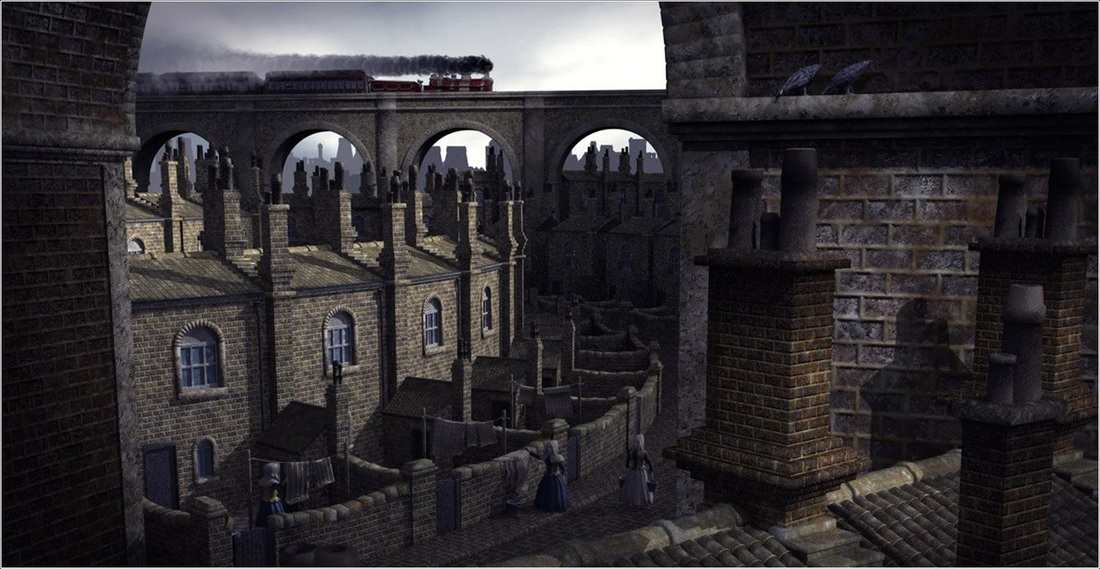 In such a hole, scarcely five feet long by six broad, I found two beds—and such bedsteads and beds!—which, with a staircase and chimney-place, exactly filled the room.  In several others I found absolutely nothing, while the door stood open, and the inhabitants leaned against it.  Everywhere before the doors refuse and offal; that any sort of pavement lay underneath could not be seen but only felt, here and there, with the feet. 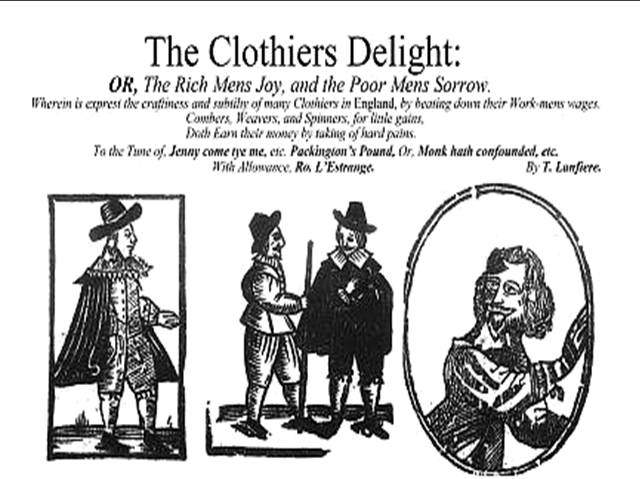 Of all sorts of callings that in England be
There is none that liveth so gallant as we;
Our trading maintains us as brave as a knight,
We live at our pleasure and take our delight;
We heapeth up richest treasure great store
Which we get by griping and grinding the poor.

And this is a way for to fill up our purse
Although we do get it with many a curse.
Throughout the whole kingdom, in country and town,
There is no danger of our trade going down,
So long as the Comber can work with his comb,
And also the Weaver weave with his lomb;
The Tucker and Spinner that spins all the year,
We will make them to earn their wages full dear.

And first for the Combers, we will bring them down,
From eight groats a score until half a crown;
If at all they murmur and say ’tis too small
We bid them choose whether they will work at all.
We’ll make them believe that trading is bad
We care not a pin, though they are n’er so sad.

We’ll make the poor Weavers work at a low rate,
We’ll find fault where there’s no fault, and so we will bate;
If trading grows dead, we will presently show it,
But if it grows good, they shall never know it;
We’ll tell them that cloth beyond sea will not go,
We care not whether we keep clothing or no.

Then next for the Spinners we shall ensue;
We’ll make them spin three pound instead of two;
When they bring home their work unto us, they complain
And say that their wages will not them maintain;
But that if an ounce of weight they do lack,
Then for to bate threepence we will not be slack.

But if it holds weight, then their wages they crave,
We have got no money, and what’s that you’d have?
We have bread and bacon and butter that’s good,
With oatmeal and salt that is wholesome for food;
We have soap and candles whereby to give light,
That you may work by them so long as you have sight.

And thus, we do gain our wealth and estate
By many poor men that work early and late;
If it were not for those that labour so hard,
We might go and hang ourselves without regard;
The combers, the weavers, the tuckers also,
With the spinners that work for wages full low,
By these people’s labour we fill up our purse,
Although we do get it with many a curse.

It was David Ricardo whose theory on the "Iron Law of Wages" postulated that population growth would keep wages at a constant, “near-hunger” level, as there are always people willing to work for cheaper wage!

And if "people" couldn't be found to replace these workers, child labor would do. Robert Owen observed the horrors of the continued usage of children in factories: 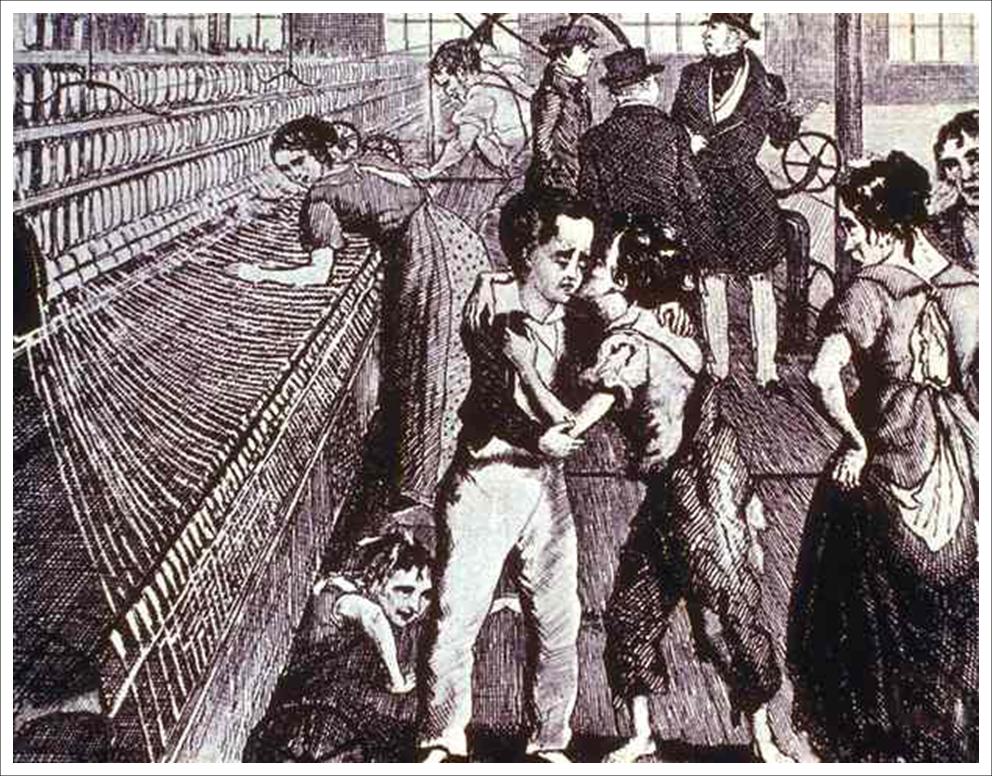 [Eventually, the difficult living and working conditions] proved disastrous, for many of them became dwarfs in body and mind, and some of them were deformed. Their labor through the day and their education at night became so irksome, that numbers of them continually ran away, and almost all looked forward with impatience and anxiety to the expiration of their apprenticeship of seven, eight, and nine years, which generally expired when they were from thirteen to fifteen years old. At this period of life, unaccustomed to provide for themselves, and unacquainted with the world, they usually went to Edinburgh or Glasgow, where boys and girls were soon assailed by the innumerable temptations which all large towns present, and to which many of them fell sacrifices to these temptations. 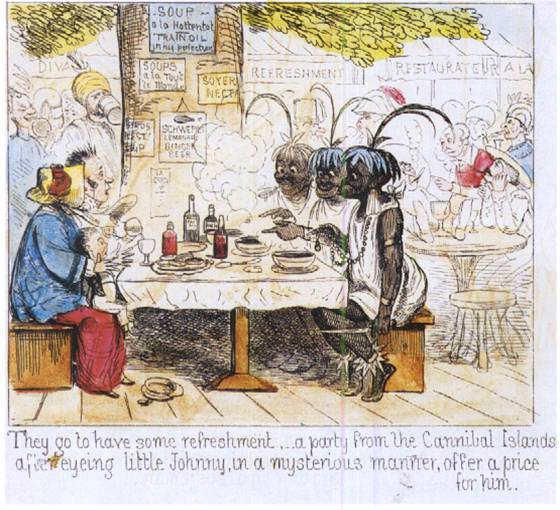 Though the "wonders of competition" and the "displays of national pride" were on grand display at the Great Exhibition of 1851, many underlying themes of the grand event would illustrate the "steps backward" of Industry. Yes, blast furnaces, lumps of coal...even early fax machines...were on display but so were prejudices, xenophobia, classism, racism, and ethnocentrism. And who can forget that the same factories that forged machines of progress would eventually forge machines of war. 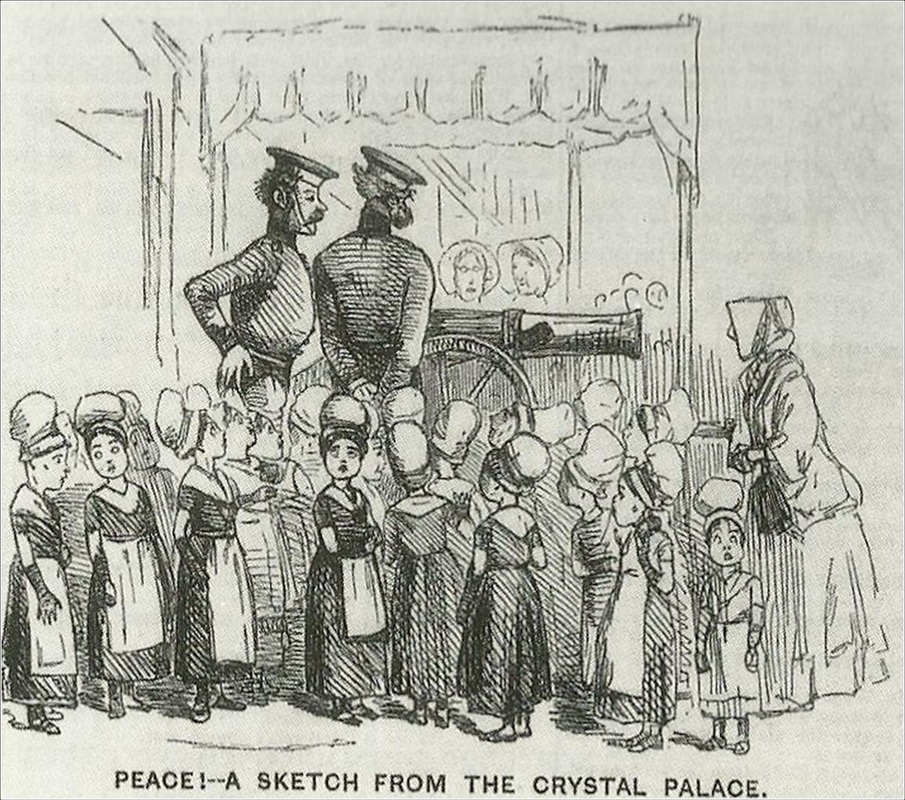 Though it wouldn't happen for another 65 years, it can be argued that Industrialization led directly to World War I...