The Formulation of "Voting Norms"
Based On Political Surroundings

Part I: The "Voting Profile"

Utilizing the people found in Norman Rockwell's "Right to Know" (1968) paining seen below, and employing the provided demographic data, see if you can identify the political leaning of each "type" of people. 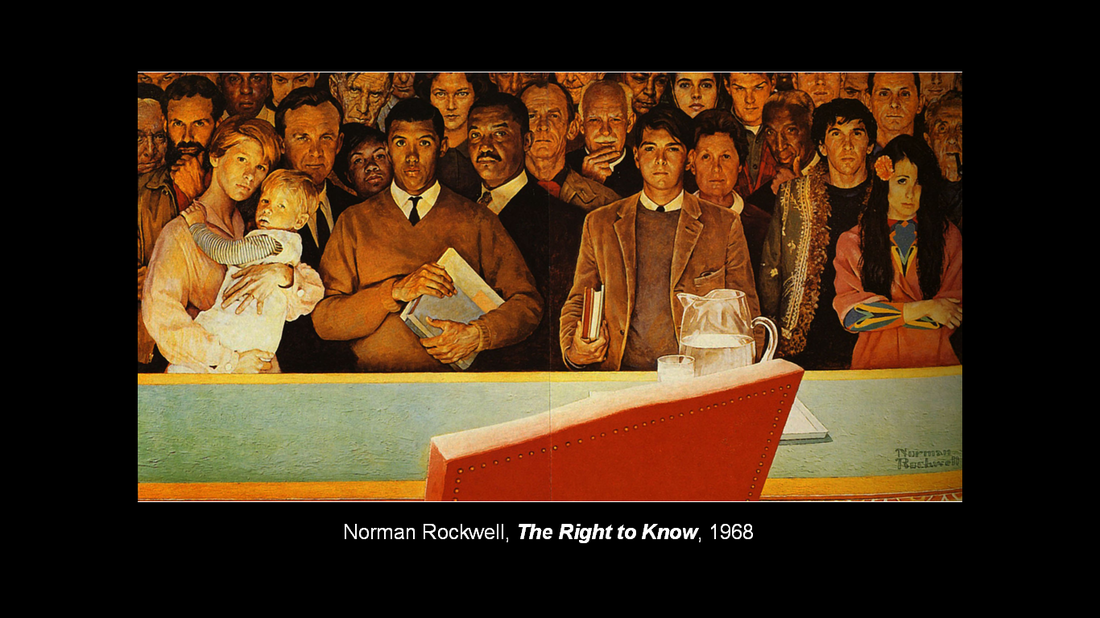 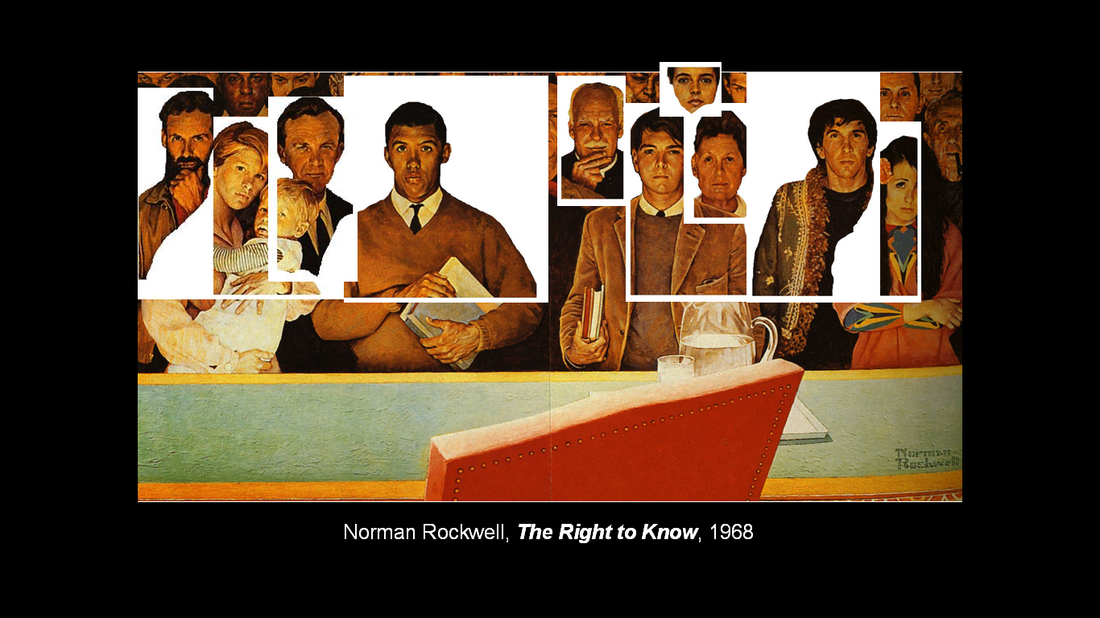 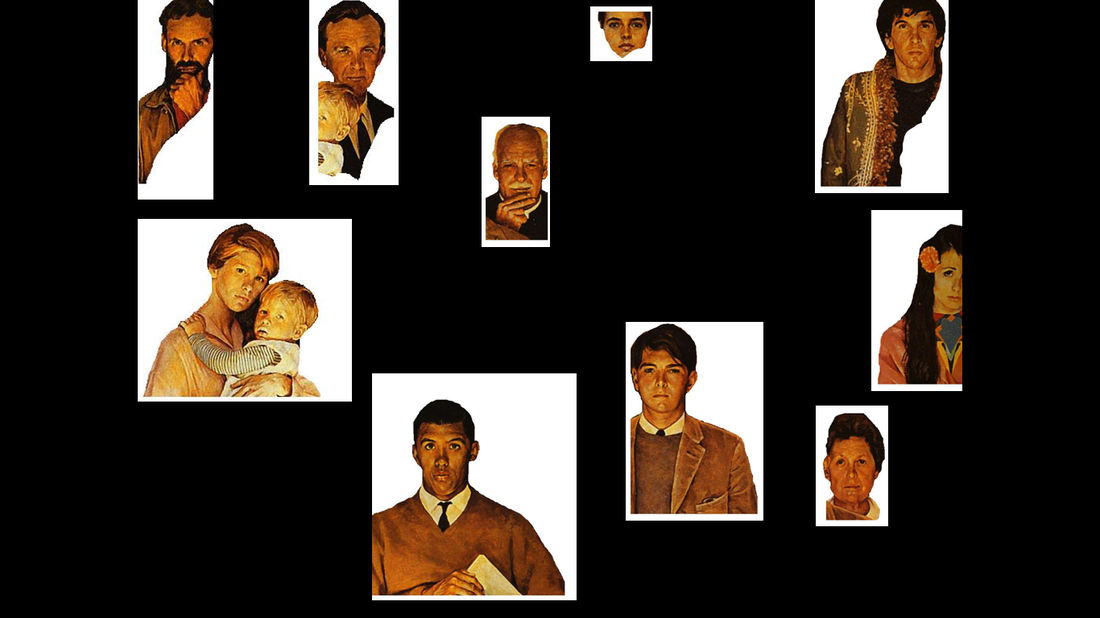 The word, "demographic" comes from the two Greek roots, "demos-" meaning "people" and "-graphia" meaning "description of". So the word "demographic" literally means a "description of people". In other words, when we use the phrase, "demographic data", we mean "information that includes a description of people".
Below you'll see the "people" from Rockwell's paining and a variety of demographic data. Utilizing this data, you'll have to identify the political leaning...Democrat or Republican of each person...and why. For example, one of Rockwell's people is a "young black male". Is he most likely a Democrat? A Republican? Why? And furthermore, if you chose a "Republican", for example, how "Republican would he be" on a scale of 1 - 10? This is the kind of evaluation you'll have to make with the data below.
You'll find the (10) types of people above. Below, you'll find various data sets from 2016 Exit Polls. An "exit poll" is a survey questionnaire of people leaving a voting place, asking how they voted. Once they determine who, or which party, you voted for, they ask you your race, age, sex, marital status, etc. Using the data below you'll have to determine Good luck! NOTE: Click on any of the images below to see them bigger! 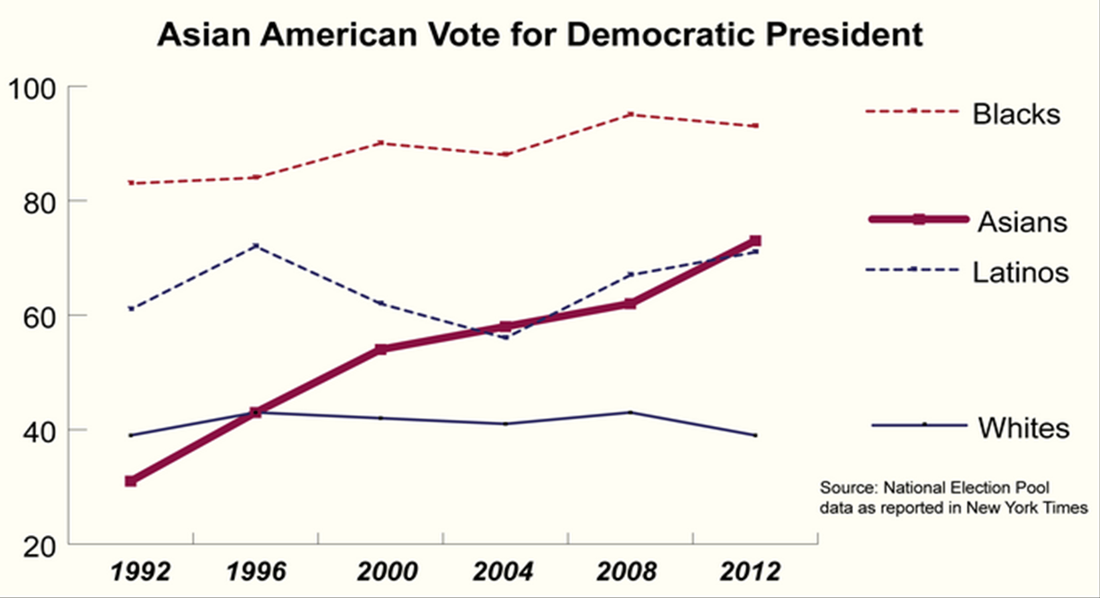 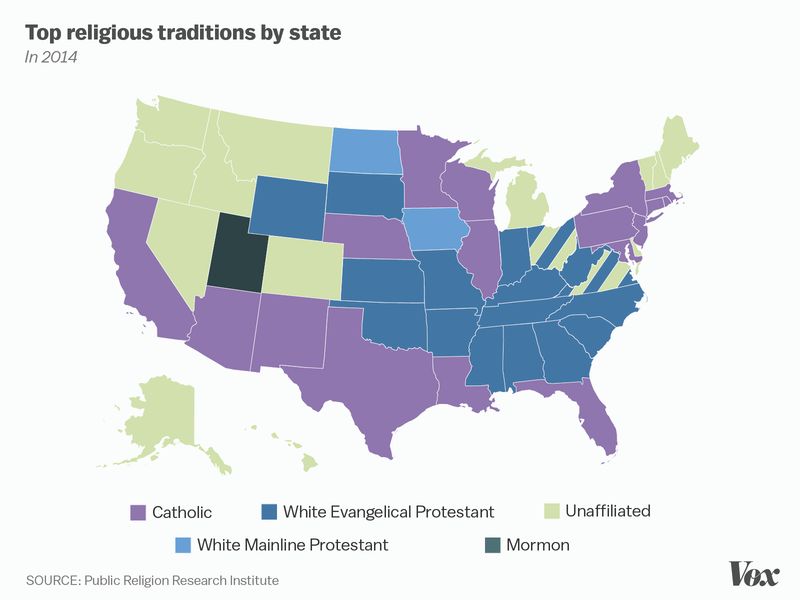 Now we know about "who votes for whom", but why? That's the big question, and we'll answer that now. 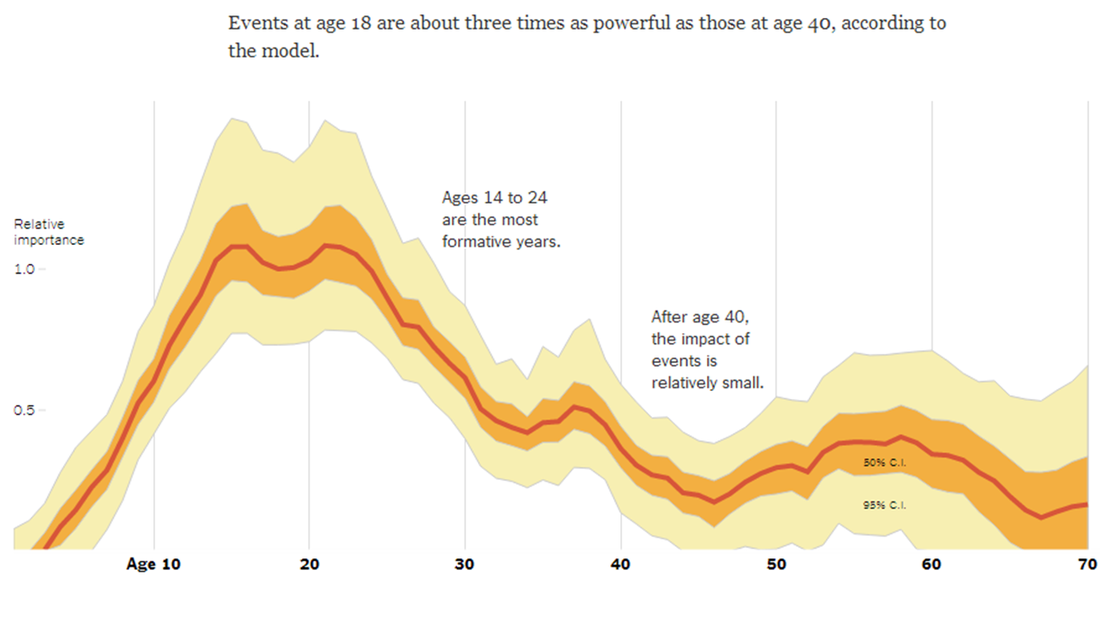 Examine the graph above. Hopefully, you can see that events occurring between the ages of 15 and 25 have three times the impact (a 1.0 on the "relative importance scale") on your development than events that happen to you later in life! That's what political socialization is all about: examining how factors around you help shape your political outlook!
We'll talk more about this later, but in this country, there are really only two (2) political parties: the Republicans and the Democrats. And in life, there are various "issues" about which people care! Below, you'll see a "generalized chart" of issues and how the Parties view these issues. Remember that these so-called "platforms" (how each party views the issues) are generalized - they're not set in stone and many people might debate them. However, they're a good place to start.

In Part 1 of this activity, you identified the party leaning of various demographic groups. You looked at data and told me, for example, that a black man would identify as a Democrat. But for the last part, I want you to tell me why. Examine the chart below and tell me why certain groups vote the way they do. It's one thing to know that white people vote Republican; it's another thing to know why! Using the data below, you'll have to provide evidence for why people vote the way they do! 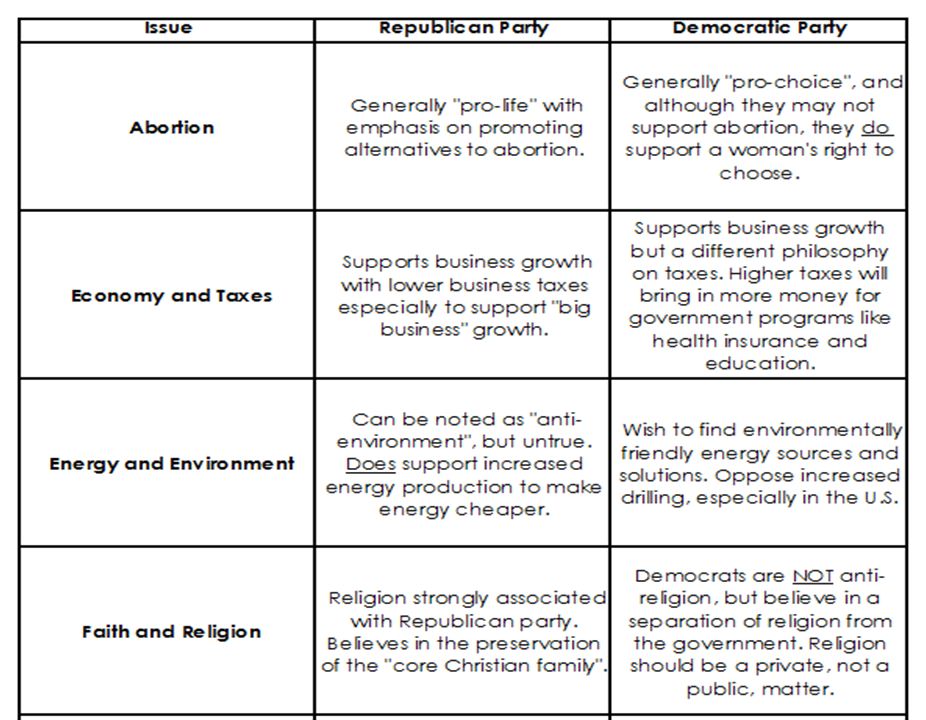 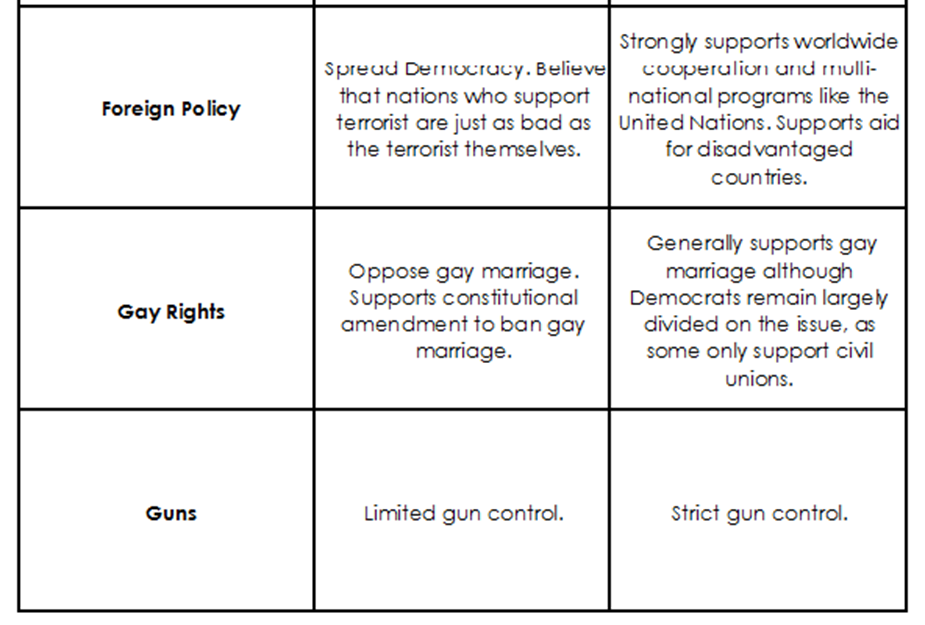 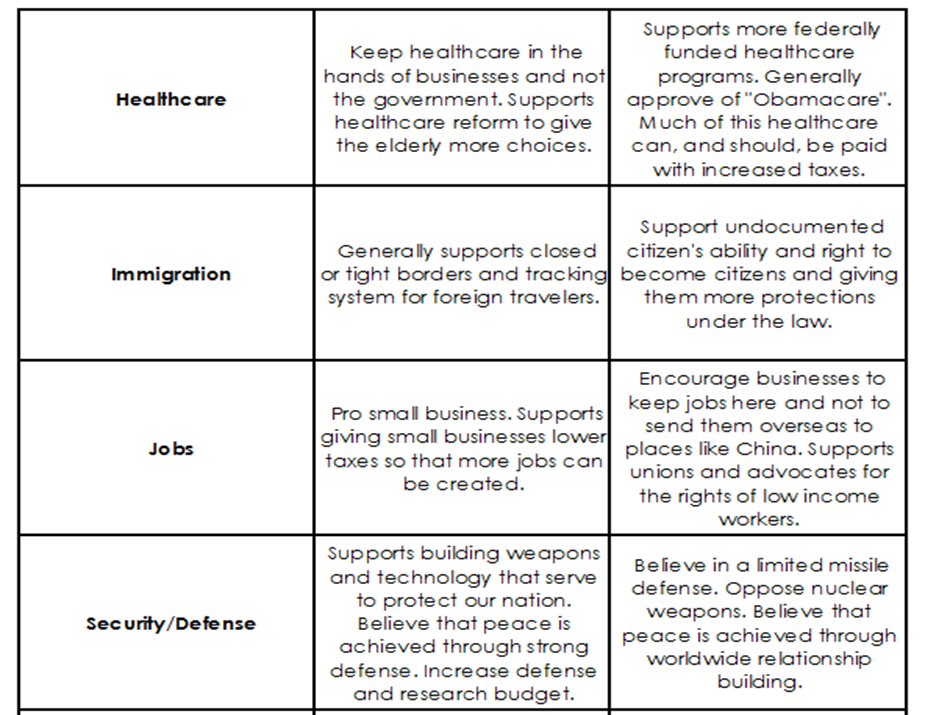