"Court Leanings"
Assessing the "Conservative" and "Liberal" Balance of the U.S. Supreme Court 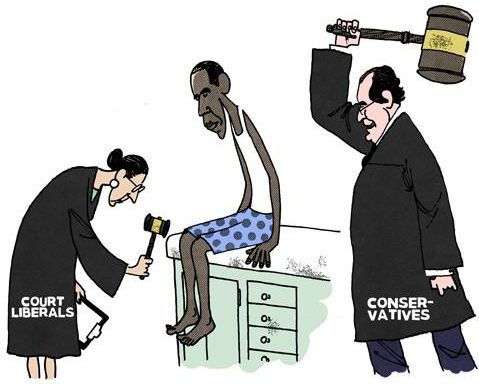 Alexander Hamilton, famed Founding Father and Secretary of the Treasury under George Washington, is quoted as saying that “the courts must declare the sense of the law;…to moderate the immediate mischiefs of those [laws] which may have been passed…and operate as a check…” upon both the legislative and executive bodies. This is a lot of responsibility on the shoulders of "Nine Old Men in Robes".

What is the "history" of their "moderation" of the laws? And furthermore, do the justices enter the position with a predisposed idea of the law, or do they "mature" over time, like a fine wine?

We'll be examining the political leanings, either "Conservative" or "Liberal" of the justices over time and analyzing the extent of political leanings in decision making. You'll be responding to various statements, using the data found below, and then examining our current (9) Justices in depth!

For our analysis, we will be using the website found here, titled, the "Ideological History of the Supreme Court". This chart shows the political leanings of the Chief Justices and the (8) Associate Justices from the 1937 to 2007. We'll talk about why the year "1937" is important later, but for now, just understand that that was the year when the Supreme Court "reinvented" itself.

Let's get a few things understood first. Refer the to chart above for reference: 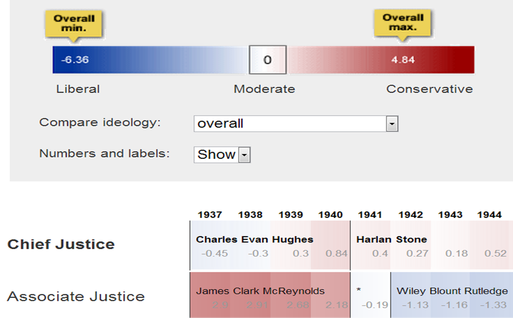 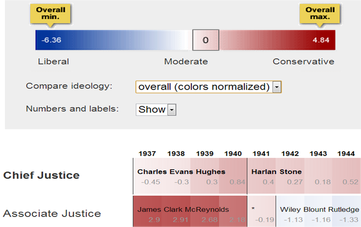 Before you start, be sure to "adjust" the "Compare Ideology" drop-down menu and select "Overall (colors normalized). The settings are defaulted at "Overall", but we want the colors "normalized" to give them a darker shading. Don't worry about "why"...just do it :-)

Make sure your box looks like the sample on the right. Then you can proceed...
NOTE: When you examine today's court, note that Justices Stevens and Souter have been "replaced" since this chart ended in 2007. David Souter, who leaned more liberal, was replaced by another liberal, Justice Sonia Sotomayor, so your "Court Leanings" aren't messed up there. Same for John Paul Stevens, who leaned more liberal, and who was replaced by another liberal, Justice Elena Kagen. In sum, your "Court Leanings" won't change.

Part II: Who's Your Friend?

We currently have the following (9) Supreme Court Justices

From the image above, you can see that the three (3) females ​are more "liberal" (more like President Obama, right now), Justices Breyer and Kennedy are more towards the "center", and the four (4) other men are much more "conservative" (more like the Republicans, today.)

Why are certain justices more liberal or conservative? It has to do with how they "rule" on certain issues! A liberal judge, for example, tends to favor more minority rights, women's reproductive rights, and environmental rights, while conservative judges tend to mirror the beliefs of the Republican Party today: pro-Christian, pro-gun, pro-military, and pro-business.

So...who's your friend? In other words, which judge(s) do you like the most? Click here to access a website where you can find how all the judges "voted" on certain issues. Then, fill out the backside of your worksheet from above! Have fun!