Directions: You’ve been assigned the role of  special investigator in the Colorado River Debate. Your job is to investigate both The Commission and “The Development” (a citizen or businessman in the booming cities of Los Angeles, Las Vegas, etc.) in this compact, and then the Farmers and the Native. I've compiled an exhaustive collection of letters, speeches, memos, requests and demands from the people who where there…all quoted below. Read them, answer the questions, and after this, conclude what will happen in this 7-state compact. 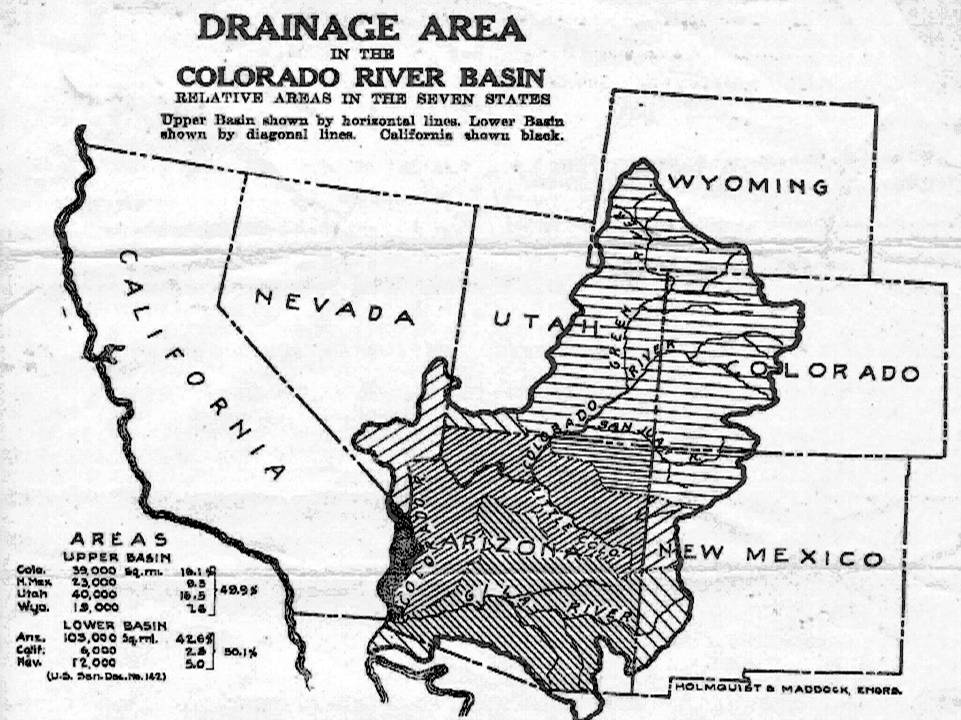 1. Examine the map of the Drainage Area of the Colorado River above. What seven (7) states will be included in this commission?

2. From the map, what state(s) has the least “ownership” of the Colorado River and its
drainage? The most ownership?

4. Which “division” do you think will be more powerful? Why?

PART I: THE COMMISSION AND THE DEVELOPMENT

Examine the quote below.

5. The quote says that “young water” must be used and then released, so it can be recaptured and used over and over again. Understanding the “origins” of the Colorado River and where it starts, what state(s) do you think are going to be pointed at for “overusing” young water?

Examine the table below: 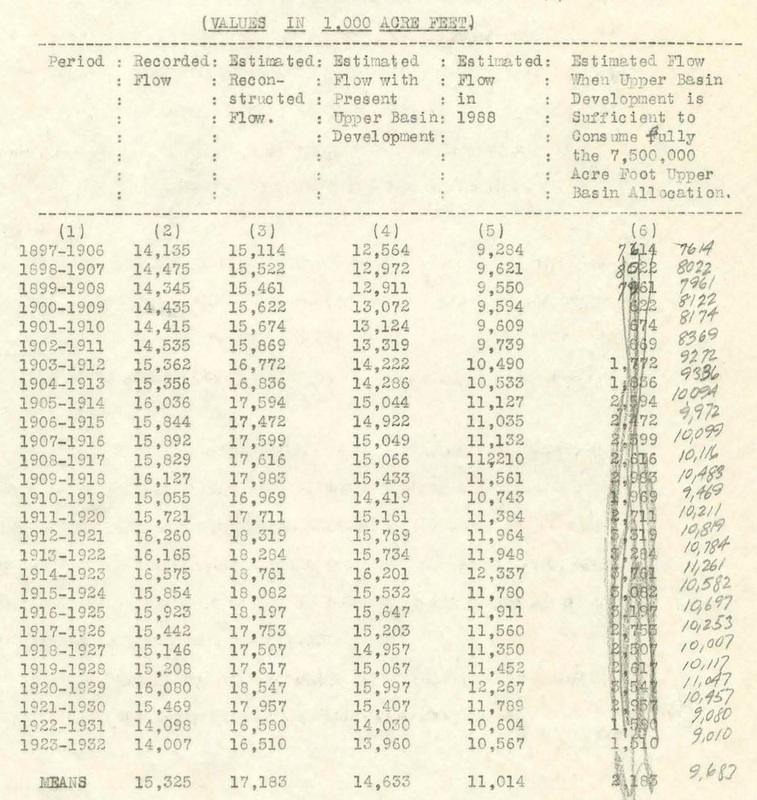 6. The “recorded flow” is how many acre feet of water have flowed in the Colorado River during a 10-year period. At what point did the river flow the highest?

7. Examine the graph. Column 2 shows the estimated flow volume of the river after construction plans have opened up all the water the river can possibly give. At the origins of the compact, the members agreed to give the Upper Division states 7500 acres of water every 10 years. Column 6
shows the amount of water left over after the Upper Division takes their “7500 amount per 10 years” was taken out. In the past decade, before 1932, is the flow from the river increasing or decreasing? What does this mean for the Lower Division?

Even though California barely has any of the Colorado River flowing into it, it still argues that it deserves its fair share. In fact, one person even argued that, “There is, and should be, no
rivalry among us”, meaning that everyone should compromise in this matter! Examine the rest of the quote below:

8. What is this representative saying as to why it’s good if California gets more water?

California and Arizona actually sued each other over who should get more water. Below California made it’s proposed solution to dividing up water rights: 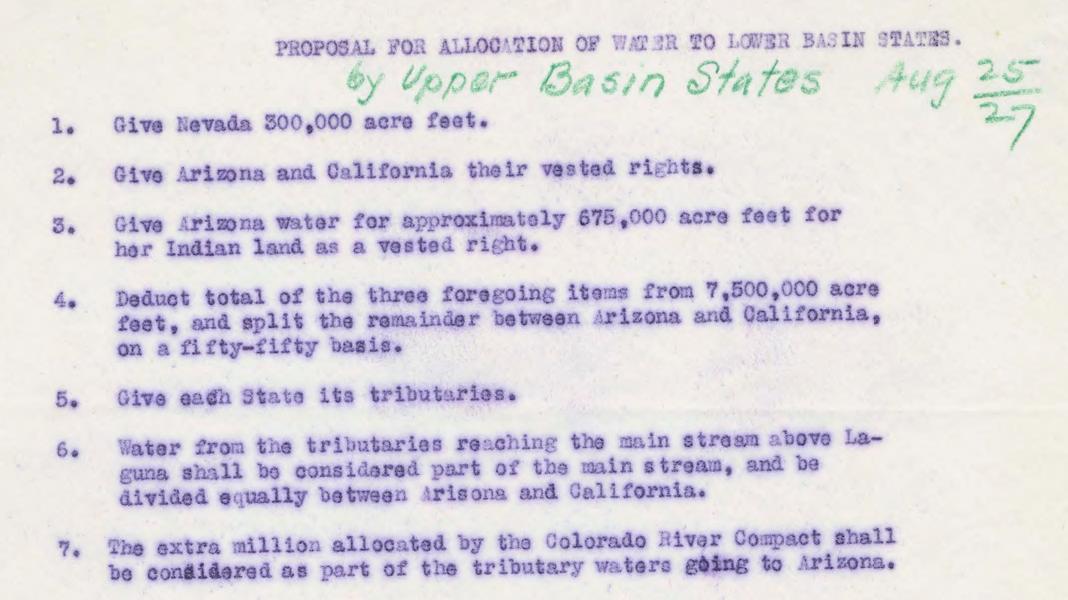 …and here is Arizona’s response: 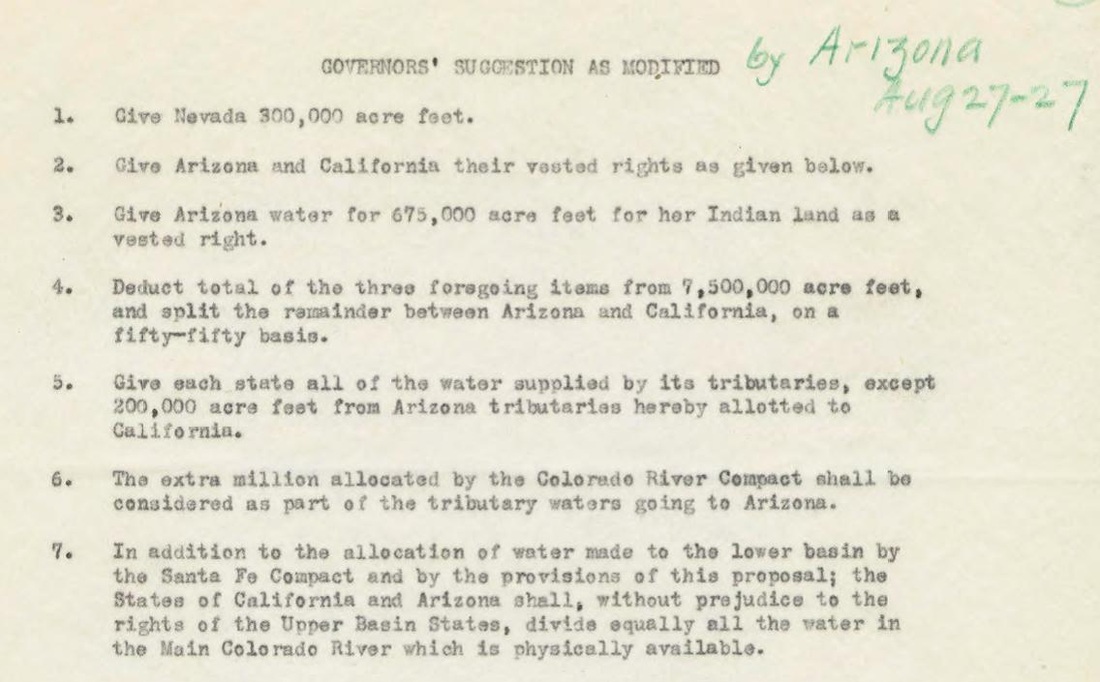 9. What are the main differences between the proposed solutions?

10. CONCLUSION: After investigating the position of the Commission members and the members of “The Development”, what they want and need, and how they treat others, I believe that the future of the Colorado River Compact, and who
“owns”the river water, will look like this:

Examine the quote below. 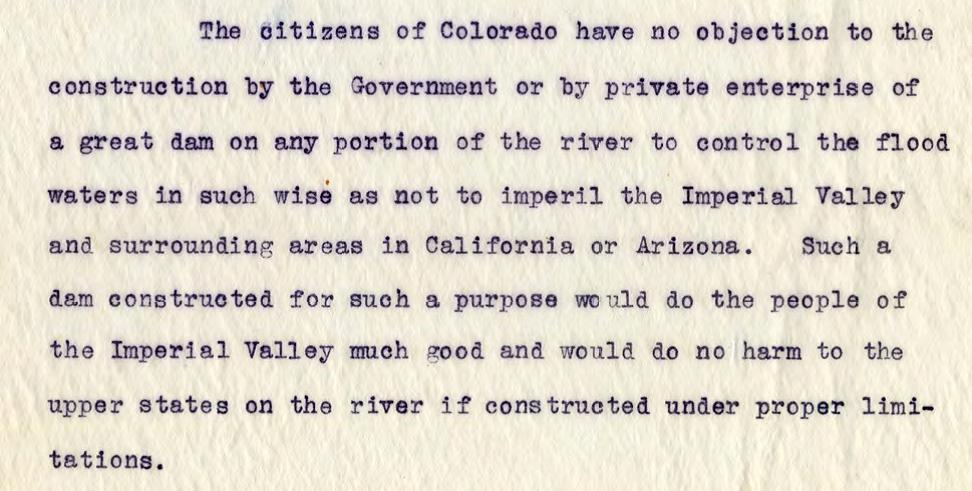 11. The proposed Colorado River dam would do “…much good…”  for farmers. What kind of “good” would damming a river do?

Now, it is greatly feared that this “division of water” might not work in the long run. In fact, some farmers might even act in a paranoid, “survivalist” way! Examine a letter, written to the “architect” of the Colorado River Compact, below:

12. What are farmers inColoradostarting to do in the high mountains?

13. This letter, written in 1923, is a huge foreshadowing of the wars that will occur between states. Complete the foreshadow: What do you think will happen in the future?

Colorado and Wyoming farmers went to the Supreme Court with one another over the usage of the Colorado River. One Wyoming farmer said the following:

"The fact that one state may make a higher beneficial use of the waters of an interstate stream and may obtain a greater crop return… [does not determine] relative rights [to the stream].”

14. What is this farmer arguing in this case?

But don’t forget about the natives? The people who lived there first? But as far as a people competing for respect in a growing nation, they are often overlooked. Agent Gensler, Superintendent of the Yuma Indian Reservation in Arizona said the following in regards to Indian water rights:

“I would not allow the Indians to lease their lands to whites because I wanted to force them to do their own farming.”

Furthermore, R.F. Walter, in regards to the same reservation says the following:

“…There is no money now with which to [create more water for the Indians]…Currently…water converted on the land is 3½ to 4½ acre-feet net on the land.”
(Remember, the State of Colorado gets approximately 375 acre feet per year…)

15. And…that it! That’s the only mention of Indians in this entire, 30-page collection of letters! Using the emotions of Agent Gensler’s letter and the U.S. Government’s expenditures on Indian water pumping, what do you think will happen to Indian water rights in the future?
16. CONCLUSION: After investigating the position of the farmer and the native, what they want and need, and how they’re treated, I believe that the future of the Colorado River Compact, and its impact on these people, will look like this: