I'm glad you're here! I understand that you've spent the day with my grandfather, Cosimo? I may not be "Pater Patriae", but I still get to retain a pretty cool title: most call me, "Il Magnifico".

Andiamo! That means, "Let's go", in Italian. Andiamo! Journey with me through a few more parts of our city. 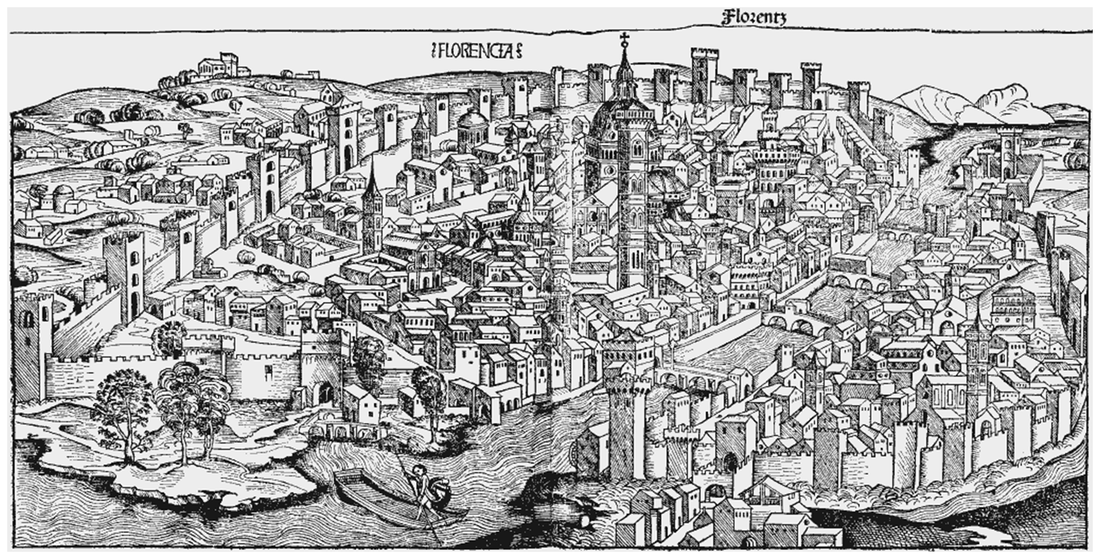 Florence truly is the most magnificent of God's cities. I am so grateful to my family lineage for giving me the opportunity to rule over this city. But I needn't brag anymore! I will let Leonardo Bruni, one of the cities chief citizens do the bragging for me:

And I couldn't agree more. Praise to God for His great beneficence. And here we are, back at the Piazza della Signoria. It was my grandfather's "political square". Behind the David and the Hercules...that's where our political offices are.

It can be said that Cosimo put Florence "on the map". So, then why am I known as "Il Magnifico"? Much like Napoleon with Paris, you won't see much of my "mark" on the city; the Dome, the bell tower, the bridges, the statues...those were all my grandfather's. But, if Cosimo made the city, I made it great. In metaphor, he made the dough; I put it in the oven! I elevated Florence to the height of diplomatic strength. I made Florence a verb and an adjective: something "Florentine" was associated with wealth and prestige. You don't know this yet, but after my death, Florence, and the Medicis, would never be the same... 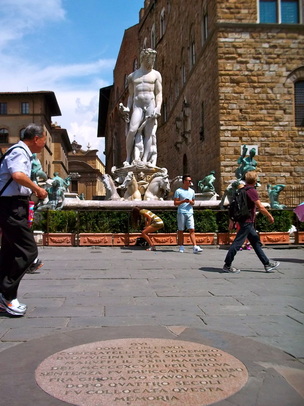 Remember my grandfather's Neptune statue? it's just to the left of the David. In front of the statue, on the ground in the front, you'll see a round "plaque" of sorts, that commemorates the death of a very important religious figure, Girolamo Savonarola.

You might say that I was a bit more "spiritual" than my grandfather, even though he would almost become pope! My son, Giovanni, would become Pope Leo X, but that's a story for a different time. As far as myself, I became sort of a "fanatical follower" of Savonarola. He became my "personal priest", of sorts, and while I was alive, he enjoyed, and employed, a signficant amount of power.

But if you look closely at that plaque, you will see that it bears memory to the death of Savonarola, by hanging and eventual burning.

What happened? Let's find out. 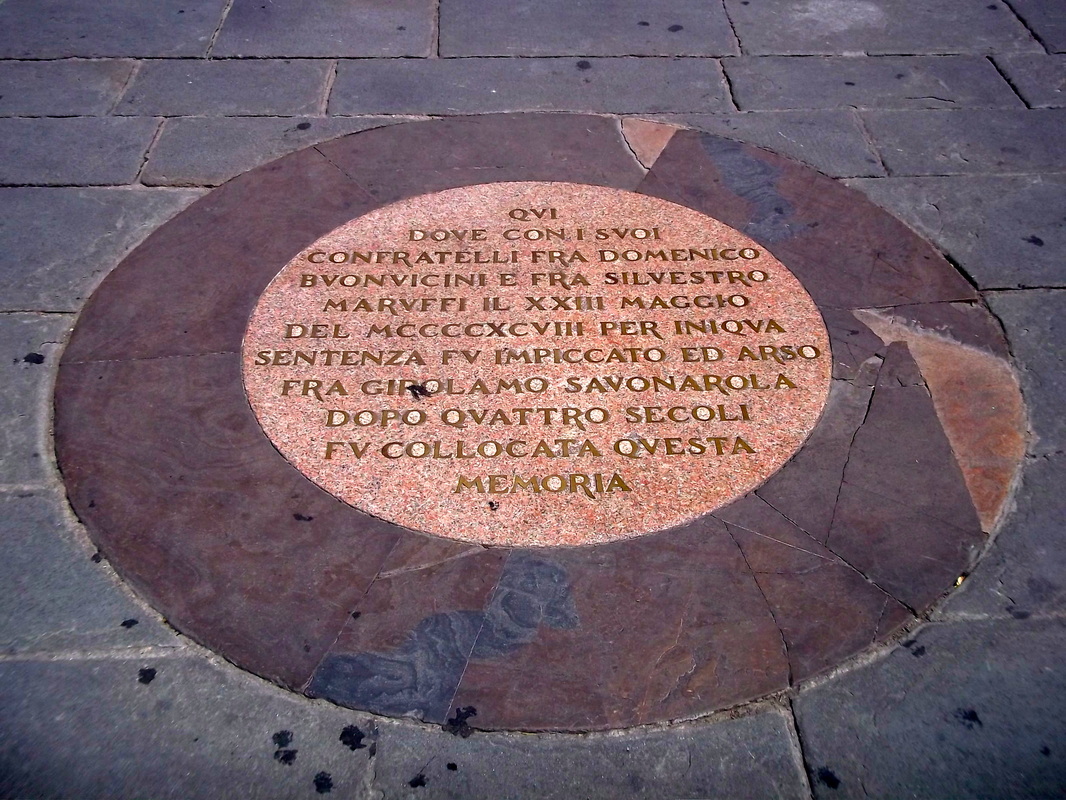 The above plaque reads:

In this place, on May 23, 1498, Father Girolamo Savonarola was hanged and then burned after an iniquitous verdict, in the company of his brethren, Fathers Domenico Buonvicini and Silvestro Maruffi. This memorial was put in place four centuries later.
History is always subject to interpretation, rumor, conjecture and bias, but most people believe that Savonarola simply got too powerful. By 1498, I would be 6 years in the grave (I was Gran Maestro of Florence from 1469 to 1492), so I must assume that the next Medici ruler must have found Savonarola threatening.

The next Gran Maestro of Florence was Piero de' Medici, but most people refer to him as "Pieor the Unfortunate". Didn't I tell you that after my death in 1492 the Medici clan would fall apart? Coupled with a new pope, Rodrigo Borgia from Spain, the two of them developed a paralyzing fear of Savonarola.

Piero was...just a schmuck. Just a screw up. The French author, Alexandre Dumas, famous for his books, The Three Musketeers and The Count of Monte Cristo, would eventually put pen to paper to write a short novel called The Borgias Celebrated Crimes. In it, he describes the rise and reign of the Borgia clan and discusses Piero here:

Piero would eventually invite the French to invade his hated city state-rivals to the South, and because of this, would be exiled from Florence...but we'll come back to that. Let's return to the title of Dumas' book, The Borgias, which suggests that the aforementioned Rodrigo Borgia might deserve more of the blame for Florence's fall than Piero. Rodrigo Borgia became Pope Alexander VI in 1492, and put simply, history remembers him as one of the most ill-equipped, most corrupt and sinful, and most self-serving men ever to fill the papacy. In fact, HBO would make a series called The Borgias in the early 2010s to show the violence, lust, greed, and betrayal of the Spanish family. Check it out if you want.

Let's get back to the story. By the 1490s, Savonarola had developed a mass appeal. He and his fellow Dominican monks would travel around Italy speaking the truth. Scarily enough for Piero and Alexander, that truth would present itself as a direct assault on their leadership.

What did Savonarola say, exactly? Let's examine a few excerpts from his manuscript, Advent Sermon (1493). In my opinion, Savonarola was more important, and did more "constructive damage" to the Church, than Martin Luther ever did! Read below:
Whoa. It's no wonder a "devil...prelate in Rome...with splendid mitres of gold and precious stones" and a "tyrant...feeding upon these vanities" would be threatened by Savonarola! I'm talking about Piero and Alexander. And it's no surprise what their next course of action was to be...

Dumas' The Borgias pays particular to the execution of Savonarola. Read here:

Dumas embellishes a bit here. In fact, Savonarola and the Fathers were hanged, and then burned. But regardless, they were killed nonetheless. 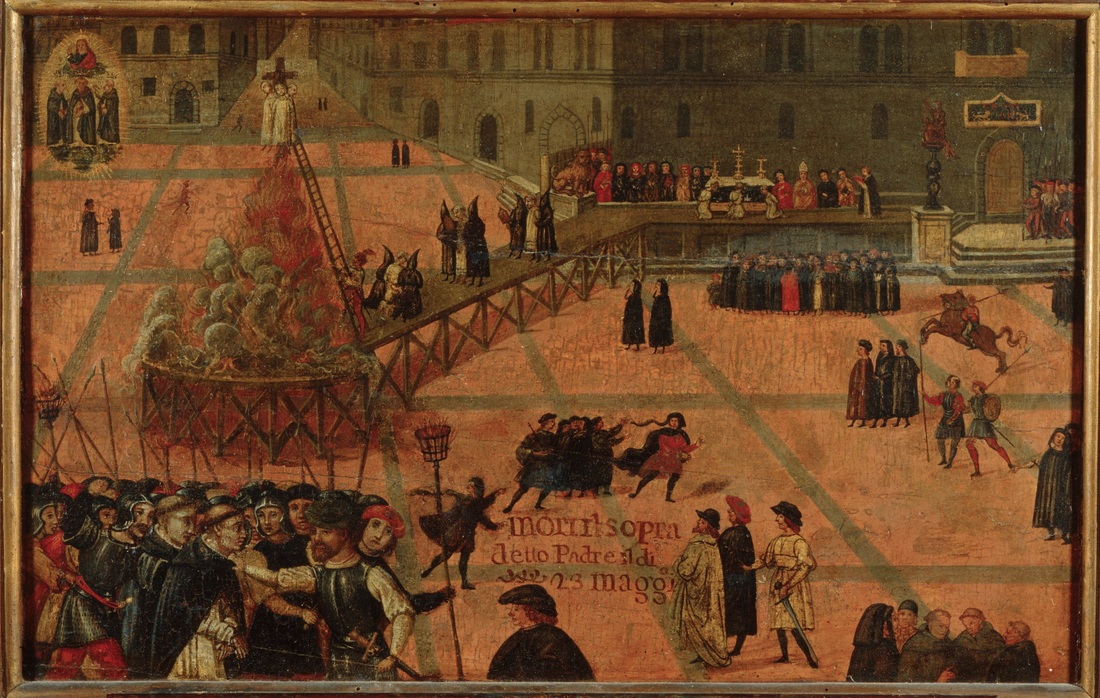 What a sad way to end our story. Nonetheless, the Fifteenth Century was truly a time of triumphant Medician power. From the reign of grandfather, Cosimo, to that of my own, the Florentines enjoyed almost 75 years of uninterrupted invincibility.

Click below to head back to the main "Leaders of Men" page and grab hold to another "leader" who'll show you the greatness of the Italian Renaissance.
"Leaders of Men" Home Page