I was born during the latter part of Cosimo's reign, so most of my life takes place during, and after, the reign of Lorenzo. However, the majority of my political life occurred during the "vacuum of power" period that was left after the exile of that pathetic little sycophant, Pieto de' Medici. It is during this time that I honed my craft.
Throughout the history of the Church, from the beginning in the 100s, to the present day in the 1500s, "every pope lasted about eight years, and these eight years, according to the character of the man who is elected, were a period either of tranquility or of disorder, of justice or of venality, of peace or of war."

Rodrigo Borgia was a prominent member of the Borgia clan from Spain, and the the early part of this life, "he became the lover of a widow who had two daughters. The widow dying, Rodrigo took the girls under his protection, put one into a convent, and as the other was one of the loveliest women imaginable, made her his mistress. This was the notorious Rosa Vanozza, by whom he had five children—Francesco, Cesare, Lucrezia, and Goffredo; the name of the fifth is unknown."


Time marched on. "Roderigo sent Cesare to study at Pisa, and married Lucrezia to a young gentleman of Aragon [Spain]; thus there only remained at home Rosa Vanozza and her two sons: such was the state of things when Innocent VIII died and Rodrigo Borgia was proclaimed pope." 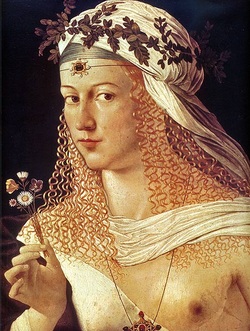 Dumas' book continues: "Lucrezia was wanton in imagination, godless by nature, ambitious and designing: she had a craving for pleasure, admiration, honours, money, jewels, gorgeous stuffs, and magnificent mansions."

Rodrigo's plan was "to begin with alliances. The gentleman of Aragon who had married Lucrezia when she was only the daughter of Cardinal Roderigo Borgia was not a man powerful enough, either by birth and fortune or by intellect, to enter with any sort of effect into the plots and plans of Alexander VI; the separation was therefore changed into a divorce, and Lucrezia Borgia was now free to remarry.

Cutting to the chase: Lucrezia would remarry again...and again...as alliances were formed.  John Sforza, a member of the ruling family of Milan (one of the most powerful city-states in Italy) was very soon Lucrezia's second husband...
Cesare would continue to work with King Louis XII of France for the conquest of the Napoli region. Fortified with a papal army of 700 men-at-arms and 5,000 infantry, he and Louis would invade and dominate Naples in 1501. As you could expect, Lucrezia's marriage was on the rocks, and it was time for her to choose a new mate: Don Alfonso d'Este, son of Duke Hercules of Ferrara.

So...let's summarize: Lucrezia has married four times and together with the king of France, the Borgia clan now dominates the entire southern part of Italy. Got it? Good. And now, we're getting to the climax.
Without political enemies, the Borgias turned their attention to religious enemies. In response to rumors of a allied confederation of cardinals against Rodrigo, the Church decreed that "first, the cardinals elected would leave all their offices vacant; these offices would fall into the hands of the pope, and he would sell them; Secondly, each of them would buy his election, more or less dear according to his fortune; the price, left to be settled at the pope's fancy, would vary from 10,000 to 40,000 ducats [$8 million to $32 million in today's currency]; Lastly, since as cardinals they would by law lose the right of making a will, the pope, in order to inherit from them, had only to poison them: this put him in the position of a butcher who, if he needs money, has only to cut the throat of the fattest sheep in the flock." 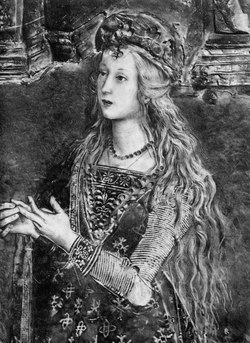 Lucrezia with a poisonous Papal ring?
The story continues. I must say, that some of this is conjecture, but I personally believe it to be true:

At a dining feast of representative cardinals, "Cesare himself gave the pope's butler two bottles of wine prepared with the white powder [poison] resembling sugar whose mortal properties he had so often proved, and gave orders that he was to serve this wine only when he was told, and only to persons specially indicated; the butler accordingly put the wine an a sideboard apart, bidding the waiters on no account to touch it, as it was reserved for the pope's drinking.

"The under butler, seeing two bottles of wine set apart, and having heard that this wine was reserved for the pope, took one, and telling the valet to bring two glasses on a tray, poured out this wine, which [the pope and the cardinals] both drank, little thinking that it was what they had themselves prepared to poison their guests."
Pope Julius II would take over next and would not restore Cesare to his previous level of power. Cesare found himself imprisoned during the Napoli wars, and though he would eventually escape, died powerless, and unprivileged in Spain. Whether he was killed by spear, or by syphilis, remains debatable. But all I can say is that after the death of Rodrigo, the Borgia clan clan came crashing down.
So...you might be asking yourself: I thought we were gonna talk about you, Machiavelli? Well, in order to talk about me, you needed to hear about the Borgias, and Cesare Borgia at that, about whom, I wrote The Prince. 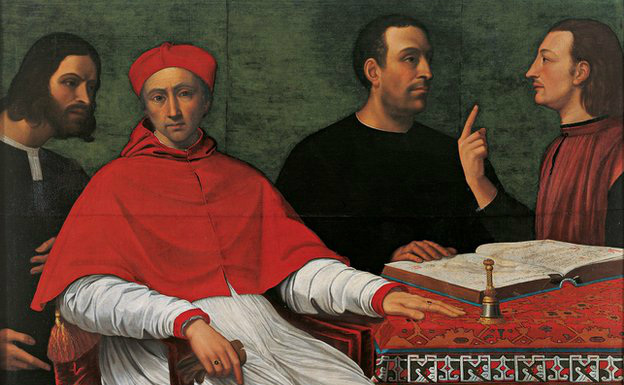 See the above image? That's Cesare on the left. And that's me, off to the center, in the black. I told you I was kept in very high esteem by the Borgia clan. In fact, I was employed in their court from October 1502 through January 1503.  So, to understand The Prince is to understand the Borgias.


I'd like to read you some excerpts from select chapters of my book. Remember the context in which this book is written: the Medici are gone, I'm in political exile (for being a corrupt leader), and, at the end of the day, the apparent leader seems to be the one who barks the loudest. Read below:

CHAPTER XV
Concerning Things For Which Men, And
Especially Princes, Are Praised Or Blamed

Hence it is necessary for a prince wishing to hold his own to know how to do wrong, and to make use of it or not according to necessity. Therefore...I say that all men...are...either...liberal, or miserly[1]; one is reputed generous, one rapacious[2]; one cruel, one compassionate; one faithless, another faithful; one effeminate[3] and cowardly, another bold and brave; one affable[4], another haughty[5]; one lascivious[6], another chaste; one sincere, another cunning; one hard, another easy; one grave, another frivolous; one religious, another unbelieving, and the like.

And I know that every one will confess that it would be most praiseworthy in a prince to exhibit all the [good] qualities; but because they can neither be entirely possessed nor observed, for human conditions do not permit it, it is necessary for him to be sufficiently prudent that he may know how to avoid the reproach of those vices which would lose him his state; and also to keep himself, if it be possible, from those which would not lose him it;

CHAPTER XVII
Concerning Cruelty And Clemency,
And Whether It Is Better To Be
Loved Than Feared

I say that every prince ought to desire to be considered clement[1] and not cruel. Nevertheless he ought to take care not to misuse this clemency. A prince, so long as he keeps his subjects united and loyal, ought not to mind [being thought of as] cruel; because with a few examples he will be more merciful than those who, through too much mercy, allow disorders to arise, from which follow murders or robberies;

Upon this a question arises: whether it be better to be loved than feared or feared than loved? It may be answered that one should wish to be both, but, because it is difficult to unite them in one person, is much safer to be feared than loved...Men have less scruple[2] in offending one who is beloved than one who is feared, for...fear preserves you by a dread of punishment which never fails...Nevertheless a prince ought to inspire fear in such a way that, if he does not win love, he avoids hatred;...He must do it on proper justification and for manifest[3] cause.

[1] clement: mild, merciful, kind
[2] scruple: doubt, hesitation
[3] manifest: established, permanent
These are just a few choice selections from my most famous of chapters, but nonetheless, you get the gist: all princes (and all humans for that manner) must know what brings down most men, and live their lives to avoid these vices. Take the Borgias for example: Did they succumb to greed? lasciviousness? cruelty? Yes. But of cruelty, did Cesare take it too far? Yes. He wasn't invited into Pope Julius II's court...for many reasons, but for one, he was not a trusted advisor.

In conclusion, be strong, be principled, and enforce discipline...with a gentle hand.