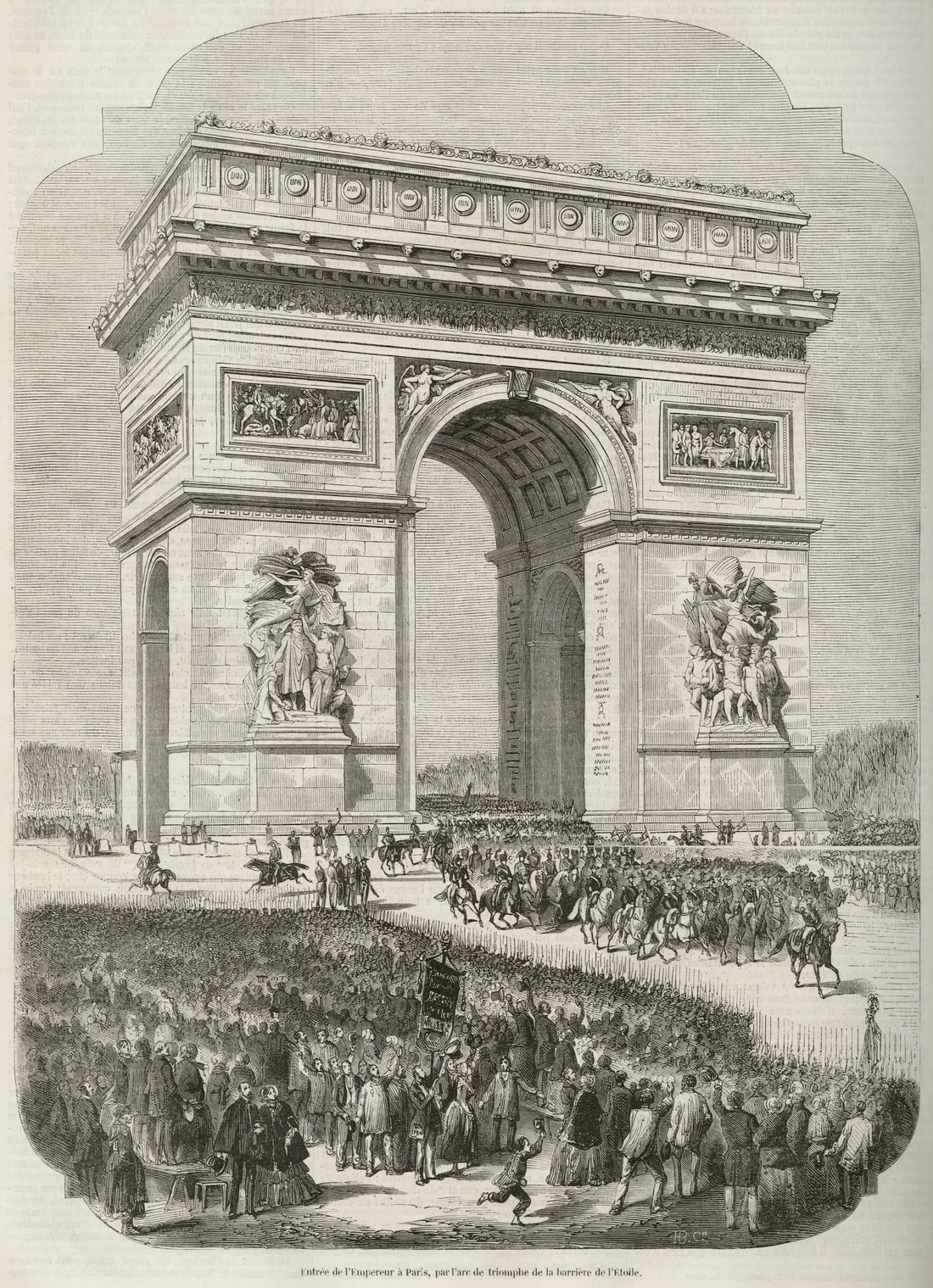 To know me, is to know my architecture. Even the most novice of historians knows that until Paris was associated with the Eiffel Tower in 1889, the Paris skyline was dominated by L'Arc de Triomphe, "The Triumphant Arch". The image above, regrettably, isn't of me, though; I died before its completion, and that's my nephew, Napoleon III, entering "triumphantly", following the Revolution of 1848.

Historians might debate my arrogance and my perceived self-worth, but the truth remains: I was not Louis XIV. I was not a gaudy, "showy", emperor. Yes, I wanted strength. But strength...with purpose. All of the architectural improvements to Paris were more-or-less, of necessity. Remember: Paris had just gone through a decade of bloody revolution where they blew everything up! So, I'll show you why my architecture was a bit of a necessity. And remember why your teacher brought you to my city: to see my architecture is to see me. Whatever adjectives you have about my ARCHITECTURE can be directly applied to me.

So, let me show you around! 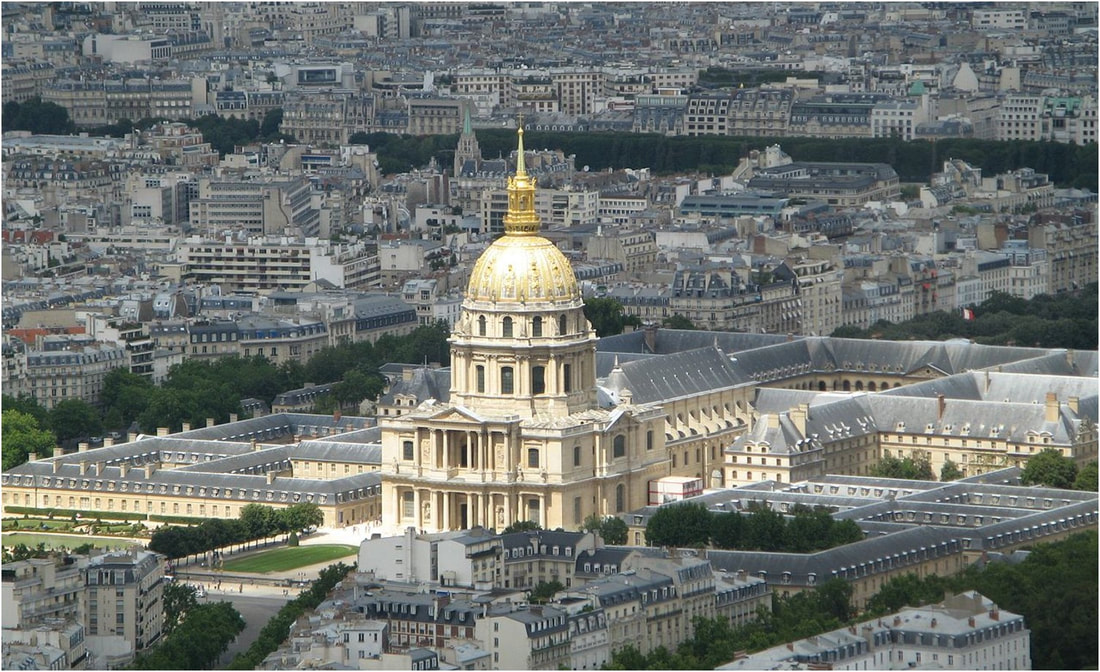 L’Hôtel des Invalides ("The Hospital for the Wounded")
To know me, is to know war. I was born into the French armed forces at a young age. I received my legend, my notoriety, (...and my infamy) in war. But don't say it was all for my own glory! Quite the contrary! The building you're looking at above is called "L’Hôtel des Invalides" ("The Hospital for the Wounded"). Let's go back in history for a brief period of time. Remember the wars of Louis XIV? Remember the War of Spanish Succession where the major European powers came together to diplomatically stop Louis' takeover of Spain? Remember the French colonial conquests in the New World? The French and Indian Wars in the American colonies? the American War of Independence? Yep! ALL. OF. THOSE. involved French soldiers. Tens and hundreds and thousands of them! And when some of them returned from battle, they were, um...not exactly "easy on the eyes"...

Previously, wounded French soldiers, in various states of recovery, were kept WELL outside the city. Why? Because 1) they were disgusting to look at, but, perhaps more importantly, 2) were reminders to the French citizens that "wounded soldiers" meant wasted money and possibly losing war efforts. 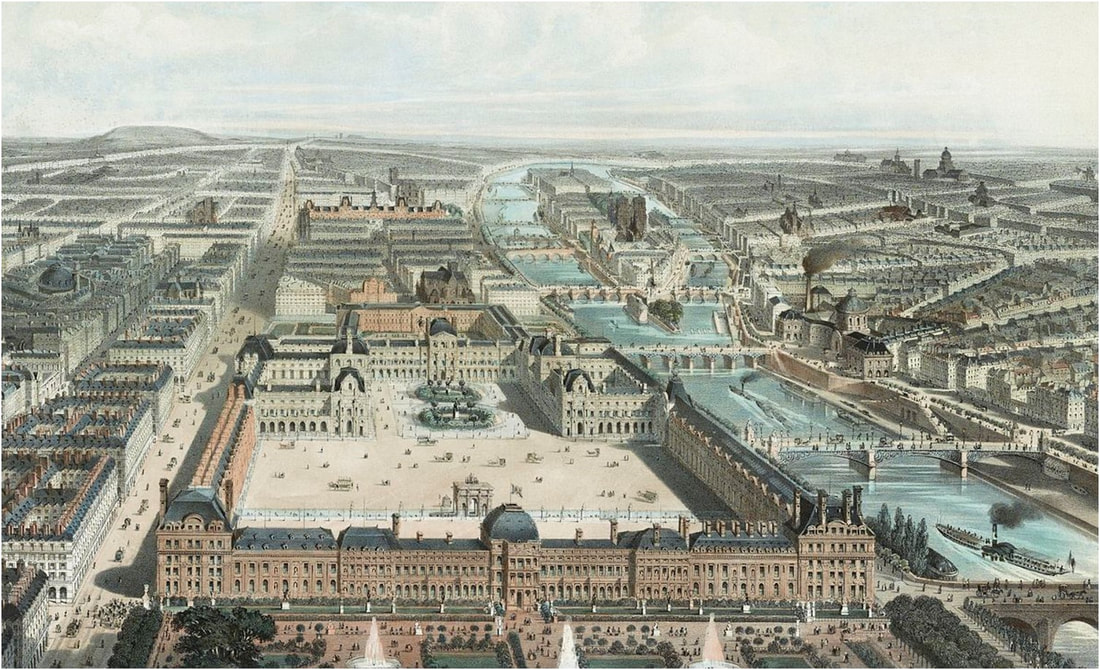 La Rue de Rivoli
Continuing with our theme of war, I'd like to take you over to the Rue de Rivoli ("Rivoli Street"). See that giant boulevard (French word, by the way..) to the right of the Louvre apartments? That's my street. You see, in times of battle, it's important to have a giant road. Why? For military parades, of course! Again, the celebration of the military is not that odd, especially to Americans! Heck, your own president has marveled at our military parades and even talked to his Congress about hosting one!

Another important note about Rivoli? Can you see how the street looks EXACTLY like the ones you Americans are used to? You probably can't even tell, but look closer: the people are driving on the right. This is brand new. Before me, all Europeans "drove" or "rode" on the left. Why? Well, historians disagree about the validity of what I'm about to say, but hey, sometimes the "legend" of history is better than the reality. Why did all Europeans drive on the left side? Because in Ancient Roman times (remember, basically all of Europe was Roman at one time...), one of two options were available when engaging in chariot or other "vehicular" battles and it all had to deal with being "right-handed": In a two-person chariot, the "driver" was on the "left", leaving the "fighter" or "attacker" free to fight on the right side. And, in a one-person chariot (...or even on horseback), the rider took the reigns with his left hand, leaving his right hand free for fighting.

...but back to Rivoli Road: every city needs to have a broad boulevard down which valiant armies will march to war, and return, victoriously! 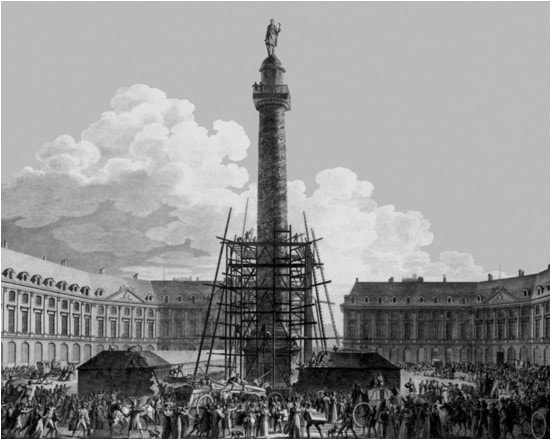 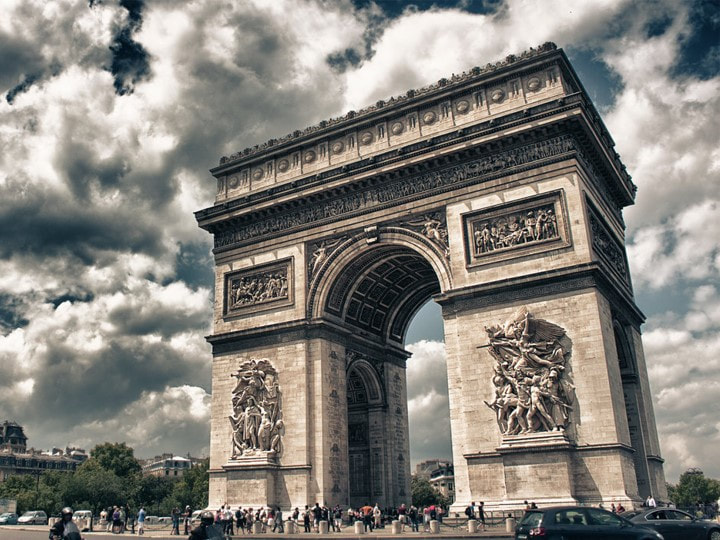 Actually, no, wait: my crowning achievement truly is what you see above: L'Arc de Triomphe. Remember what I said about the military needing a "walk way"? Well, they needed a giant "gate" through which to walk, too! And that's why my "arch" was: an exit, and entry, point for French armies!
Remember both my obsessions with war and my fascinations with the Romans (...and your partner will talk to you about more "Roman stuff" with neoclassical art, too!) But as you can see, my Arc was fashioned after the same arcs of the famous Roman emperors: ​Constantine, Tiberius, and Titus. But yeah, mine's bigger. And much more detailed!
My Arc is designed to arrest the viewer with scenes and themes of war. In the above, left, relief, you see the Angel of Victory leading a valiant warrior and his men on to war. See how much they adore their leader? That's a vision of me, too! And, on the upper, right, relief, you do see me, crowned with the laurel leaves of peace, victorious after yet another battle. 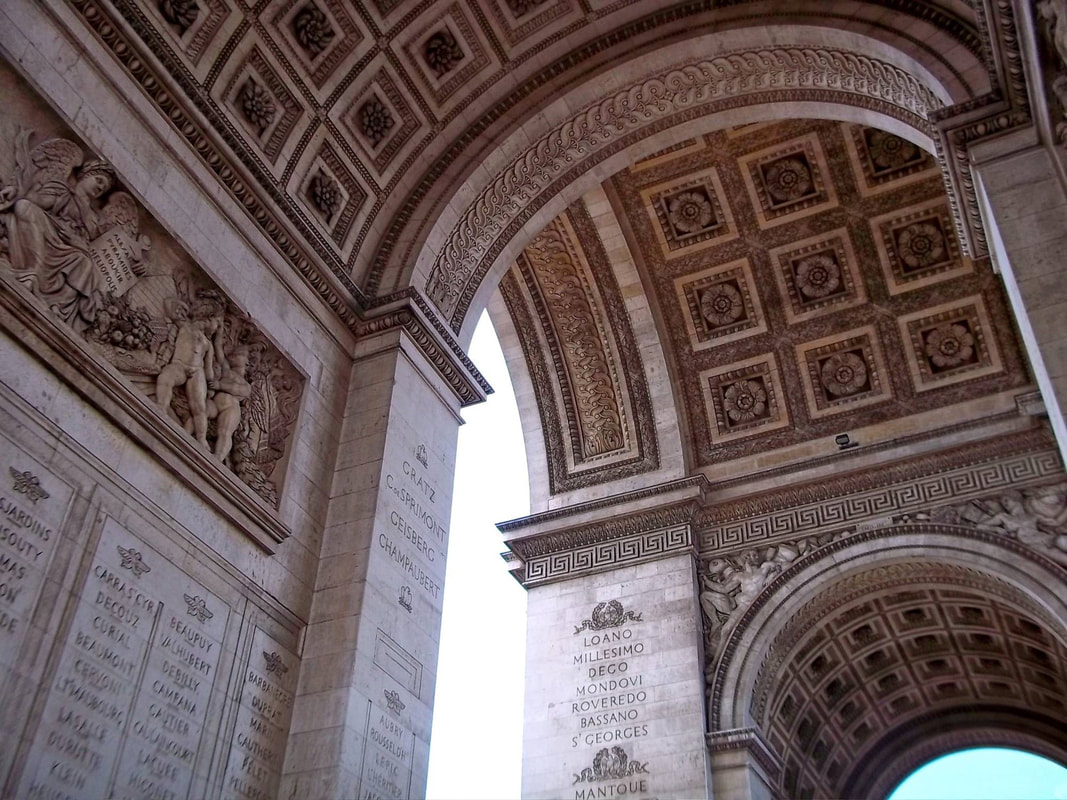 Looking at the Arc from underneath, you see the names of famous generals and other leaders of men who helped secure the victories for France. And even after my death, the French people still continue to add the names of famous military leaders - even ones in the 21st century! 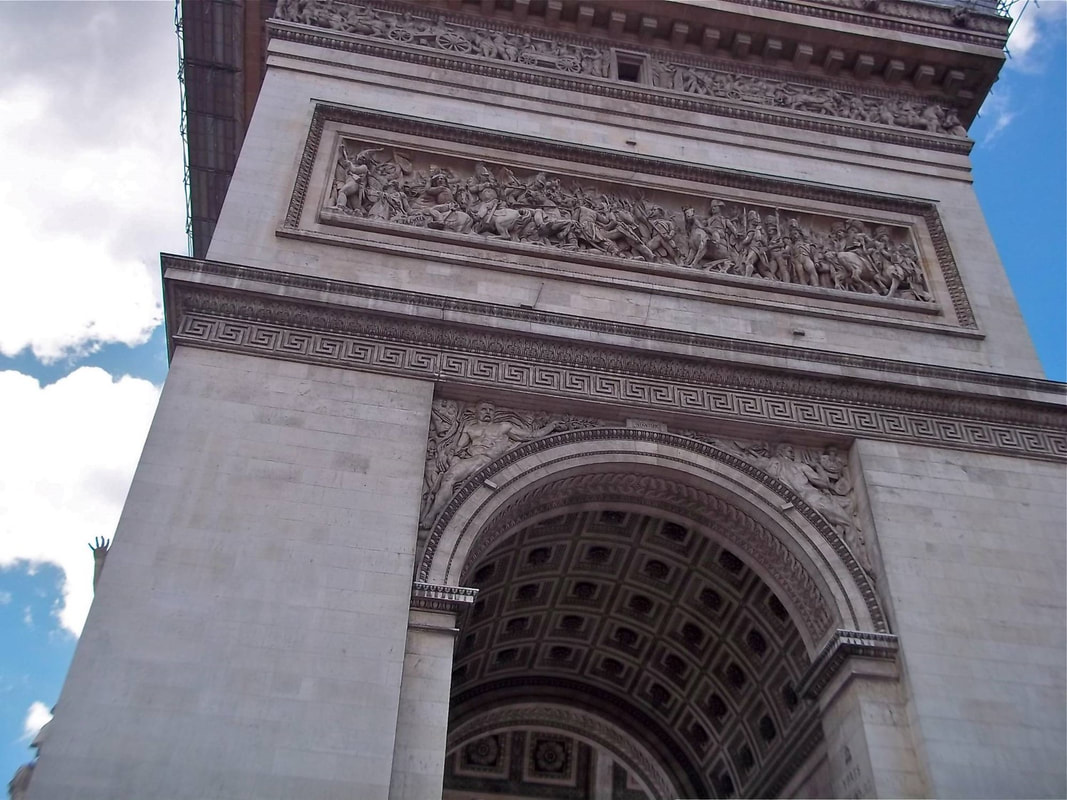 Most of the scenes and carved reliefs on the sides of the Arc feature military expeditions of all kinds, but one, specifically, is saved for me. If you look hard enough at the top, you might see me, leading my troops to war! 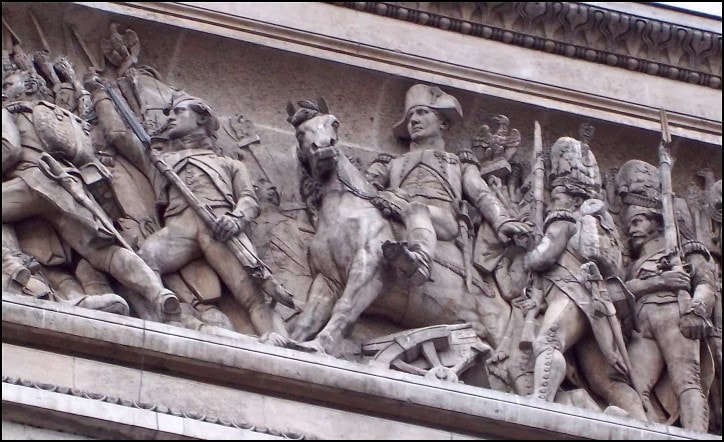 A real general leads from the front, and my soldiers knew that. Though some may argue that my military successes were ironically my downfall, my troops never abandoned me. L'Arc de Triomphe wasn't finished by the time I died, but it does still stand as a symbol of French power and victory​.
So there you have it! I hope you learned a little bit about the city architecture that I left my people. But remember the assignment your teacher gave you. Whatever words with which you describe my architecture  is me: powerful? emotional? dramatic? war-based? BIG? That's me! I'm glad you came to the City of Paris.