- 1848 -
National Powder Kegs Explode in the Nations of France, Austria, and Prussia

Partner #2: You will be "examining" first! Below, you'll find various "chapters", so to speak, of the revolutions. You'll be examining an image from the first "chapter", as your partner reads about the accompanying image. Then, your partner will show you the image about which they just read, and then you'll switch roles: the reader becomes the "examiner"; the "examiner", the reader. 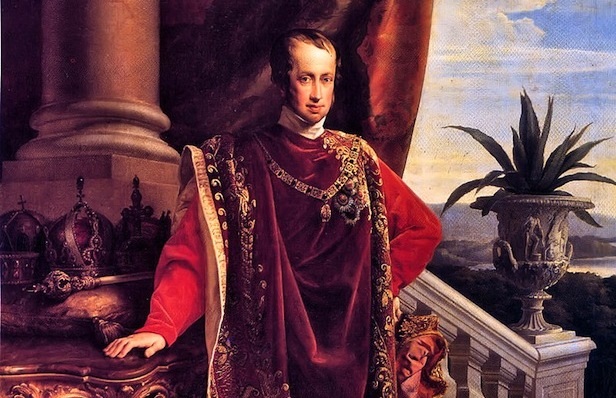 Emperor Ferdinand I of Austria

North of Austria, the teenaged Prussian Empire was booming. The Rhineland territory, with its advanced economy and relatively positive experience of Napoleonic rule, had been given to Prussia in 1815, to strengthen Germany against France. This made Prussia a kingdom of two halves - the east dominated by the landed nobility, with their great estates and their peasants, who until 1807 had been enserfed, and the west, with its strong manufacturing base and burgeoning middle class. Furthermore, Prussia was a cultural force with which to reckon: In Prussia, where there was a well-established tradition of state schooling, an impressive 80 per cent of people were literate.

Yet, on the Prussian throne sat Frederick William IV, descendent of Frederick William the “Great Elector”. But this Frederick William proved to be a different sort of ruler as he once explained to a disappointed liberal official that ‘I feel I am king solely by the grace of God.’ A constitution would, he said, make the whole idea of monarchy ‘an abstract concept, by dint of a piece of paper. 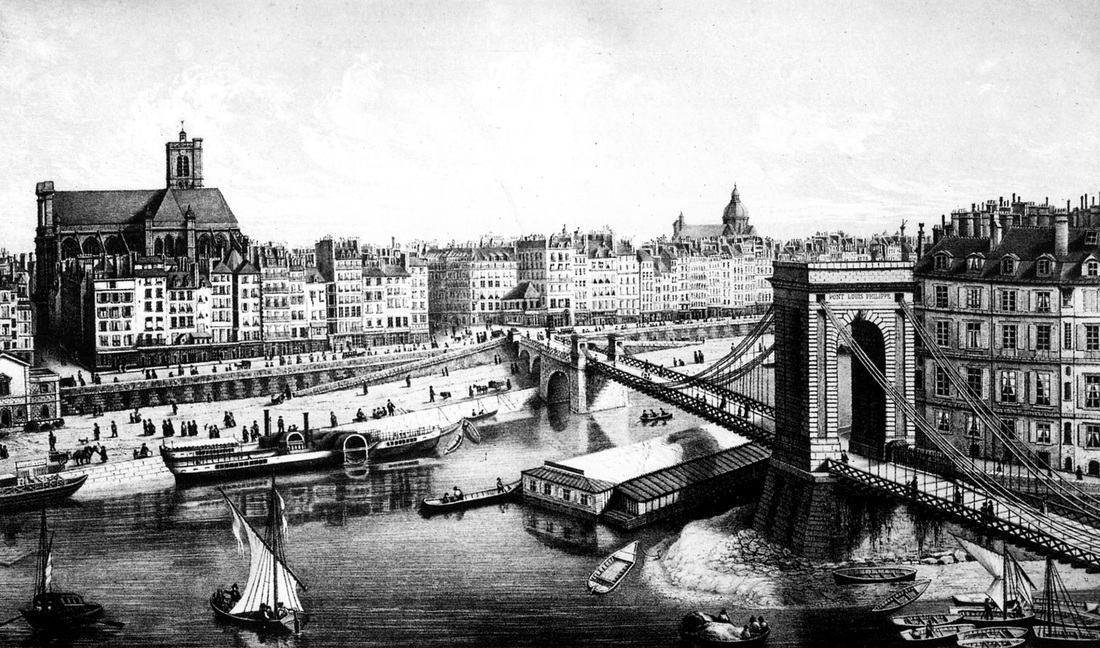 Steam-powered paddle boats on the Seine River in Paris, near Pont Louis-Philippe, 1840 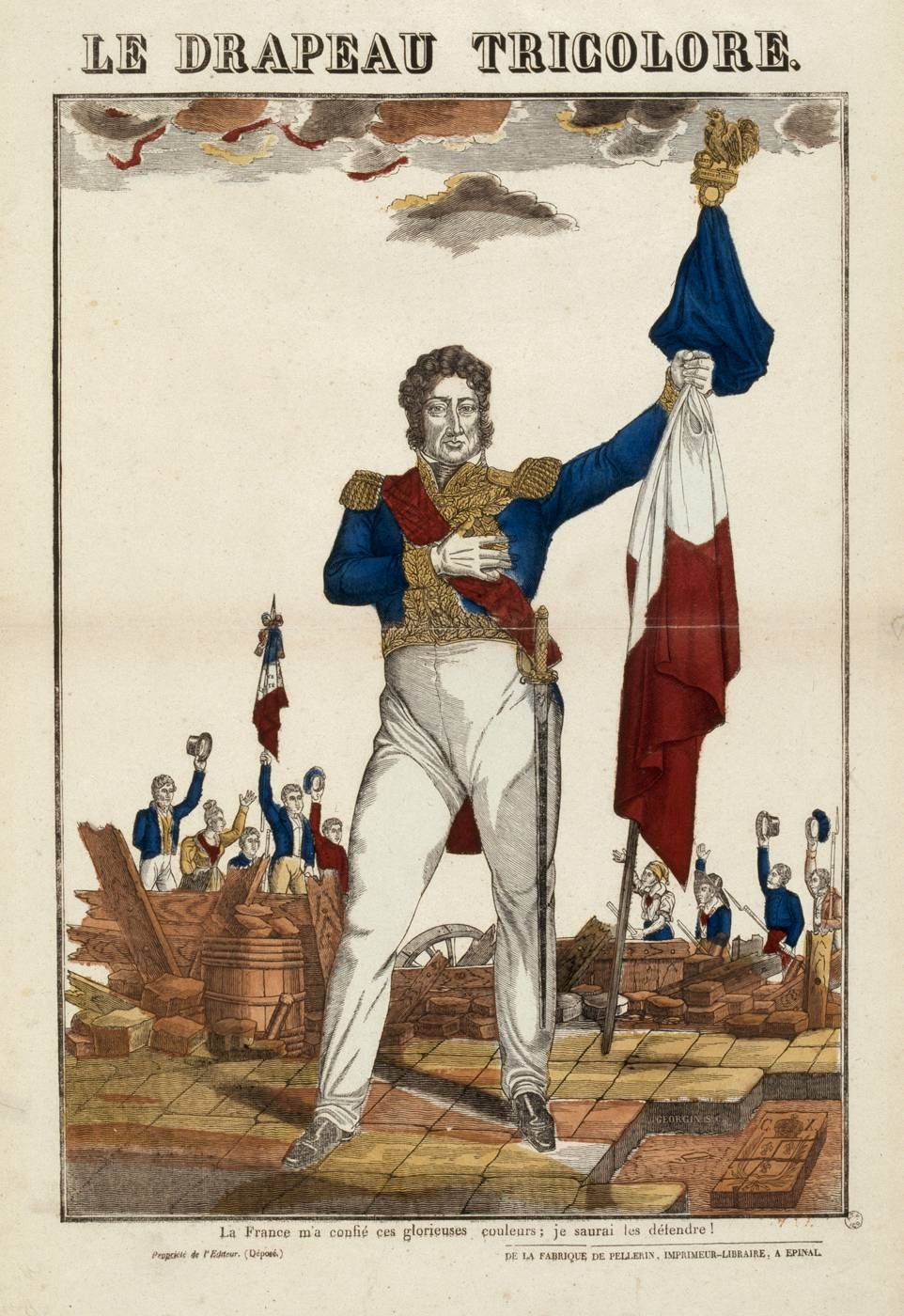 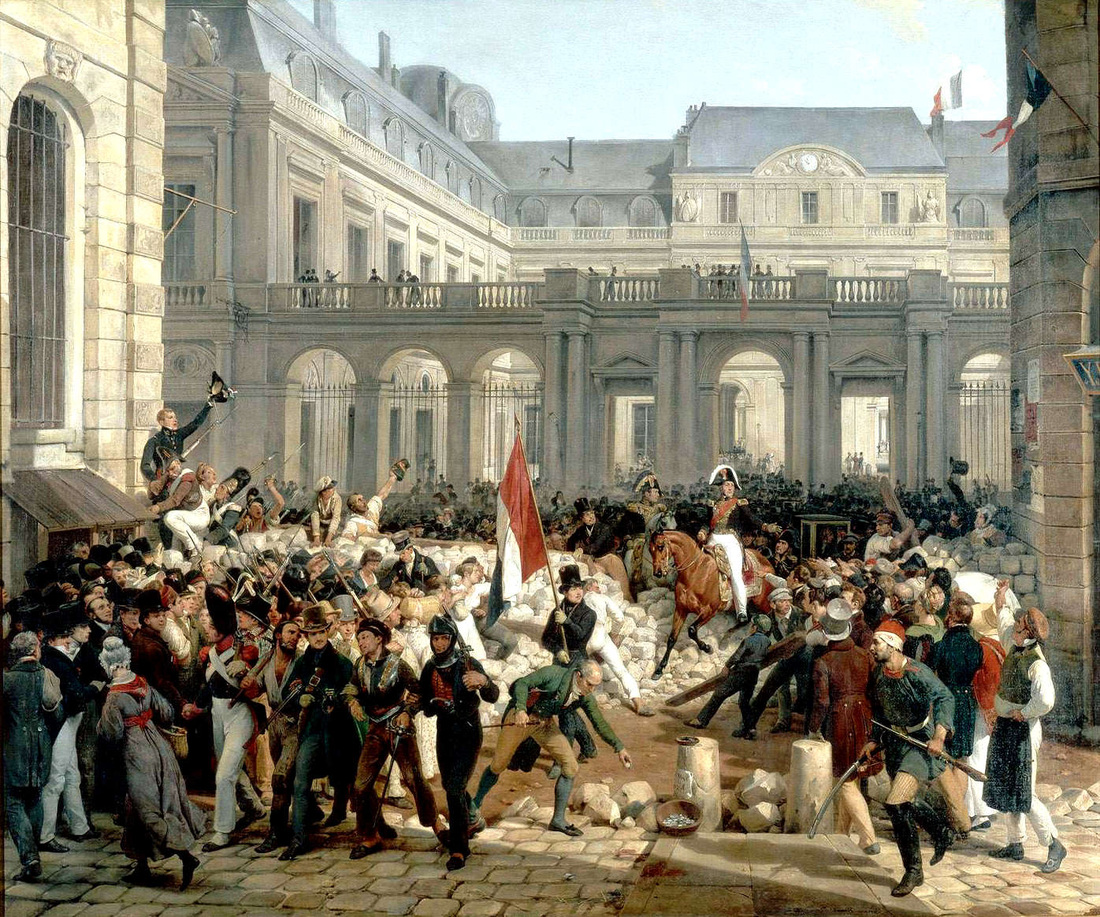 Louis-Phillipe going from the Palais Royal to the Hôtel de Ville, 31 July 1830.

But as the calendar years progressed from 1830 to 1831, 1832, 1833, and 1834, revolutionary unity dissolved, replaced by revolutionary fervor. The Parisian insurrection of April 1834 - the inspiration for the uprising in Victor Hugo’s Les Misérables - ended with a massacre on the rue Transnonain, when enraged soldiers clearing revolutionary snipers from a tenement room by room indiscriminately slaughtered twelve civilians whom they found sheltering there. The killing of innocents left an indelible stain on the July Monarchy. French revolutionary republicans reacted with more violence, including, in 1835, a truly horrific assassination attempt on the King by a twenty-five-barrelled gun, dubbed an ‘infernal machine’, in which some fourteen people were killed - but not Louis-Philippe, who escaped with a single bruise.

Louis-Philippe’s hand was forced, and he had to act quickly. The September Laws of 1835 imposed press restrictions: newspapers could be prosecuted for proposing another system of government or for insulting the King - although that did not stop the bold caricaturist Honoré Daumier (who was prosecuted for his cartoons) from transforming Louis-Philippe’s jowly features into a pear shape, an image which stuck.

Why 1848? Why not closer to the advent of the French Revolution? And more directly, why revolt during a time of unprecedented peace throughout the continent of Europe? The reasons are three-fold:

Chapter 7: A Light Shines on Milan 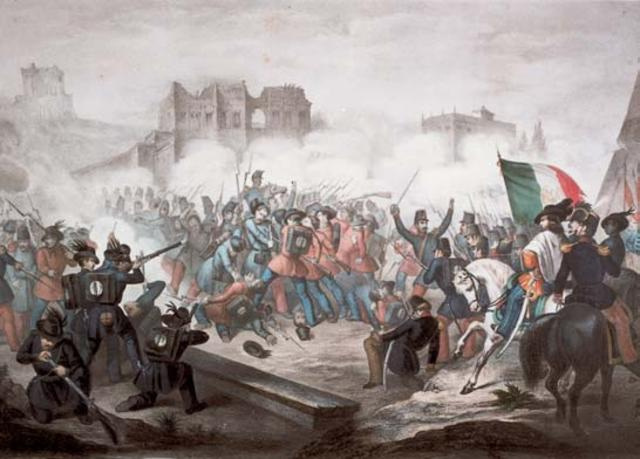 News of the slaughter pulsated around the city: for Parisians, the massacre seemed to signal the onset of a government effort to reassert its authority by crushing force. The Parisians did what they do best: took to the streets. While the Château d’Eau rail station burned, the Louis-Phillippe collapsed in a chair in his study, watched by his hapless courtiers. Politicians offered him conflicting advice, but it was the slippery newspaperman Émile Girardin, editor of La Presse, who at midday strode forward and brusquely urged Louis-Philippe: ‘Abdicate, Sire!’

Instead, Louis-Phillippe restored to desertion: he dressed (as he liked to do) in plain, bourgeois clothes, walked briskly with his wife Marie-Amélie through the Tuileries Gardens and boarded a carriage waiting on the Place de la Concorde, from where, escorted by loyal cavalrymen, they drove off, reaching the northern French coast on 26 February. There, the British vice-consul (showing either a profound lack of imagination or a wry sense of humor) gave the royal couple the alias of ‘Mr. and Mrs. Smith’. On 3 March they landed in Britain, where Louis-Philippe would die in August 1850. In the early hours of 25 February, French writer Alphonse de Lamartine dramatically strode out on to a balcony, declaring: ‘The Republic has been proclaimed!’ His words unleashed a roar of ecstatic cheering. The Second Republic of France was thusly established. 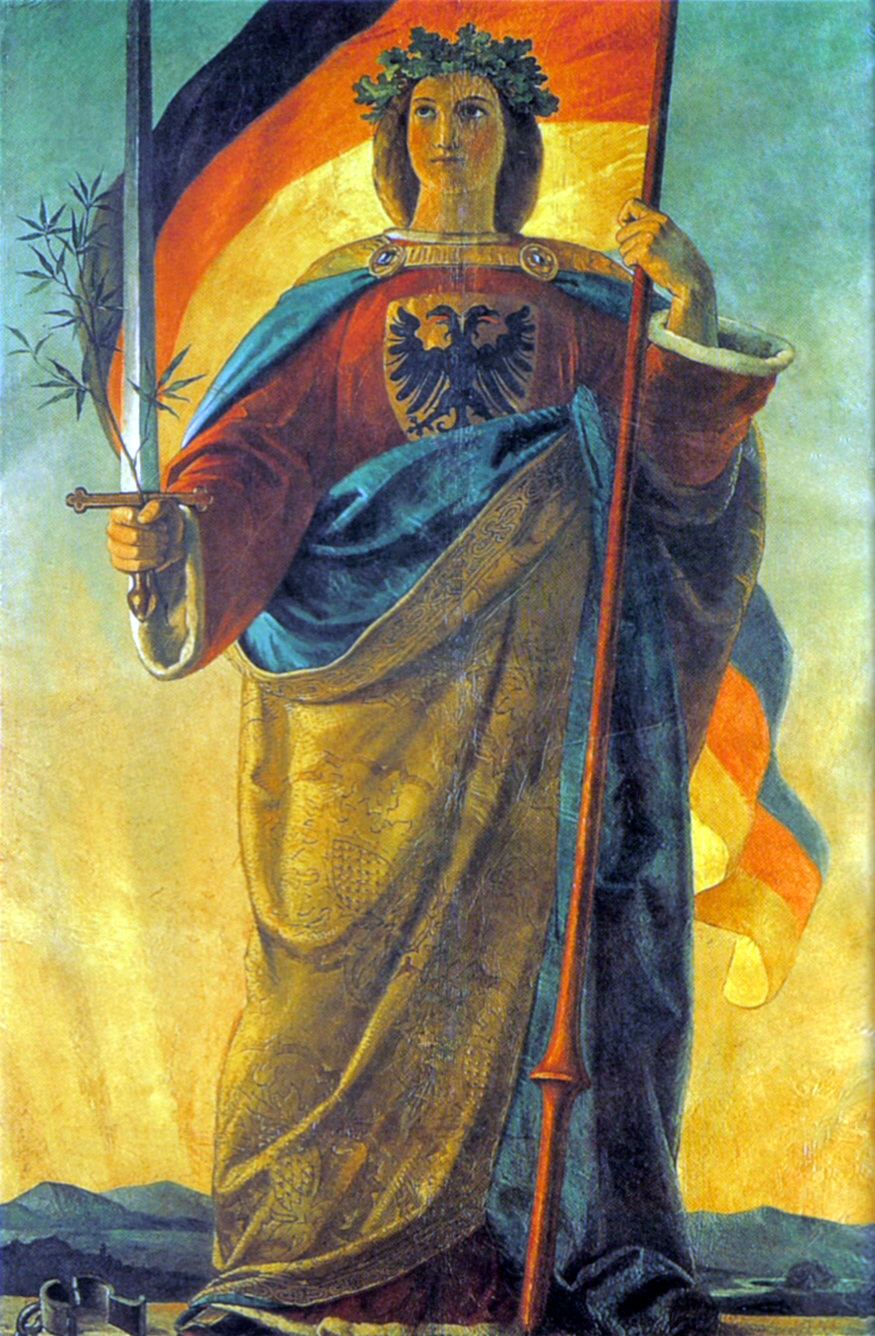 Members of the German Bundestag (Parliament) meet with their demands.

Chapter 10: On to Austria

In Austria, One Viennese wrote excitedly that ‘The word “constitution” is giving a new movement to the waves of the time - a movement that will be felt over the whole globe and which will strike many a pillar of absolutism with thunder and lightning.’ Those parts of Central Europe that so far had merely effervesced at the news from Paris now boiled over on the word from Vienna. By April, 1848, Emperor Charles VI had agonizingly been pressed into resigning. Metternich slipped out the Hofburg government building minutes before the deadline for a new constitution. expired. He and his wife Melanie left Vienna that night in a discreet fiacre boarded another carriage outside the city and drove to a train, which spirited them across Europe. They spent almost a fortnight in The Hague, a city in the Netherlands, waiting asylum in England. He never received this permission. 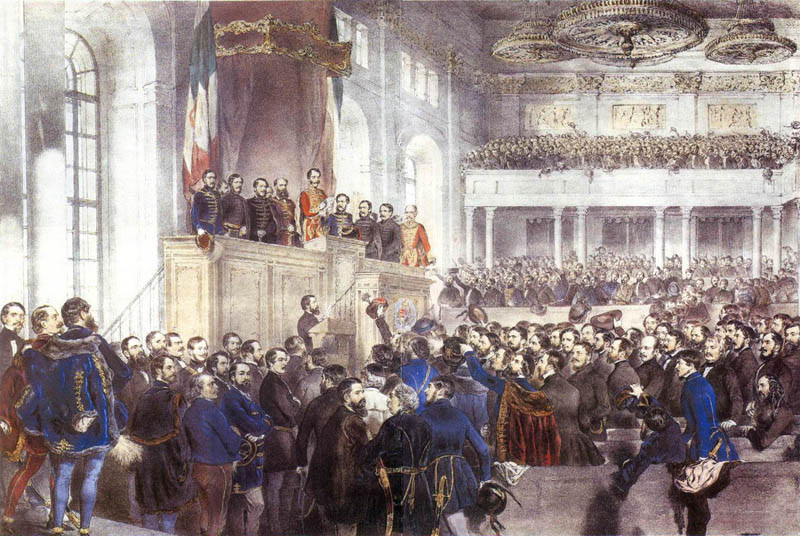 5 July 1848: The opening ceremony of the first parliament in Hungary. Their first priority was to enact the Twelve Points.

Chapter 12: The Battle of Berlin

Northward in Germany, action of committees was not so pleasant. In the Prussian city of Berlin, one promise had not been made: to pull the troops out of the city. The battle for Berlin was one of the most ferocious anywhere in Europe in 1848. When the troops attacked the barricades, they used artillery and then marched head-on against the fortifications. Faced with the ferocity of the insurgents, the frustrated, furious and often frightened soldiers fired indiscriminately into houses, through doors and windows. Houses burst into flames and burned through the night. In all some nine hundred people were killed in an afternoon and night of fighting - eight hundred of them on the insurgents’ side.

Finally, on March 21, 1848, swept along by the popular tide, Frederick William issued a proclamation, in which he declared: ‘I have today taken the old German colors and have put Myself and My people under the venerable banner of the German Reich. Prussia henceforth merges into Germany.’  This was deliberately vague, but for now it seemed to satisfy the clamor for Prussian leadership of a united Germany. He would also announce that he would grant a constitution. Yet, playing the role of revolutionary monarch did not suit a king who had been forced to yield most of the concessions. Three days later he and his family abandoned the city for Potsdam and the royal palace of Sans-Souci, protected by elite guard regiments. Safe in his palace, the King began bitterly to feel the humiliation of the March revolution: ‘We crawled on our stomachs.’ 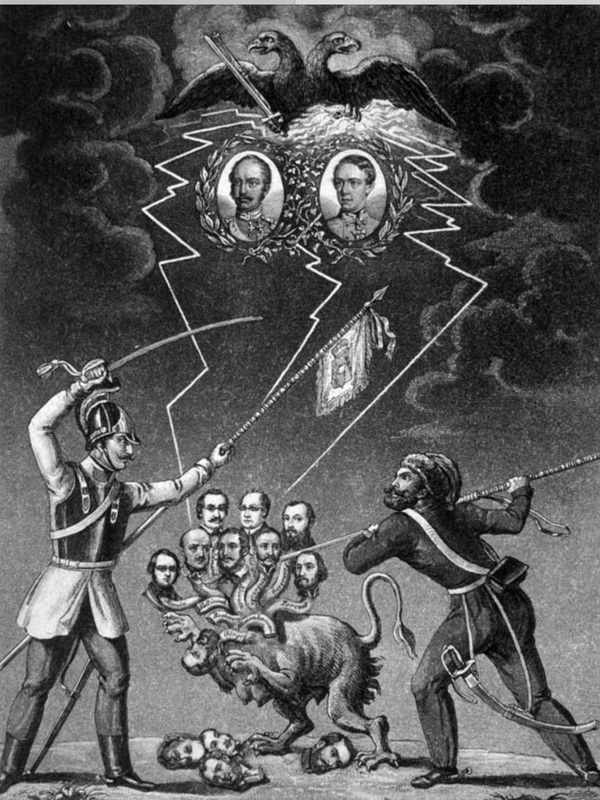 Austrian and Russian conservative forces would eventually join forces to put down the "multi-headed hydra" of the revolutionaries.