Yes. This is a "model camp", but we've had a few problems here. I want to be upfront with you, so I will be a honest as possible. Let's start with that infamous "Great Escape" that I'm sure you've heard of in those damned British newspapers! 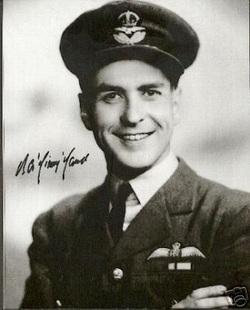 B. A. "Jimmy" James escaped from our camp, along 12 other camps, throughout his five years in our prison systems. 13 escapes in 5 years?! Preposterous. I can't comment on the other camps, but ever since he and 75 others escaped from our camp in January 1944, our camp has been heavily fortified. Just for the record, James was captured, again, and sent to another camp. Just for the record, we caught 73 of the original 76 escapees; 50 of them were executed. You can see his escape plans below. Since he and 75 others "tunneled" out, we've put a stop to that by laying concrete floors in many of the barracks. 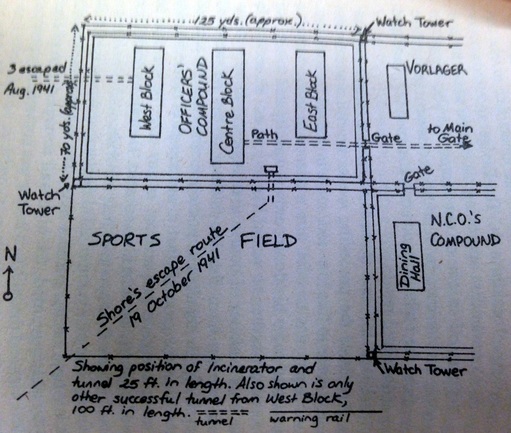 And yes, I suppose we must comment on the "medical examinations" at this camp. 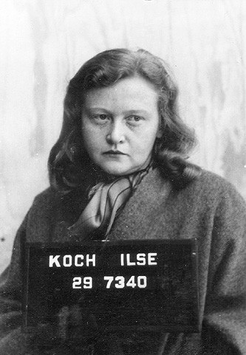 We have no one here like that "beast of Buchenwald" Ilse Koch, the wife of Karl-Otto Koch, the commandant at Auschwitz Concentration Camp. You know here: that crazy lady who liked to keep the "tattooed skin" of those who were killed at the camps? The one who made lampshades out of people's skin? The one who made local German prostitutes have sex with the dead bodies of the prisoners just for her amusement? Yes. She's crazy. And disgusting. There's no one here like that!

But we do have "medical experiments", mainly in the category of "superhuman strength". We're trying to develop a "steroid-type" injection that might help our troops in the field. So, yes, we're testing them on prisoners. Nothing great yet, but we're getting there! And in terms of "medical experiments", sometimes, yes, our doctors call the prisoners in for a "medical exam", the Genickschussanlage.
The Genickschussanlage ("Neck Shot") works like this: a "patient" sits in the waiting room while the other "patient" is being visited by the doctor. The patient waits, and sits on the lone chair in the waiting room. There is a hole in the wall, right at "neck height" of the patient, and through the hole, one of our soldiers provides the "death shot" that kills the "patient" instantly. It's much easier for a soldier to kill a prisoner through a hole in the wall, rather than en masse or in gas chambers. 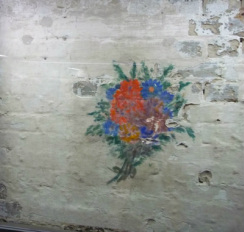 But I want to end with the issues of artwork we've recently found on the walls in the basement of the kitchen. No one knows who's done this, and no one knows when it happened! The SS don't go into the cellars often; it's just the place where we keep the potatoes and carrots and grain.

But the other day, we found these. I assure you, they will be cleaned up promptly and we will punish the artists (if they can call themselves that). But I wanted to keep you informed. I wanted to be honest with you, and not hide anything in our camp. 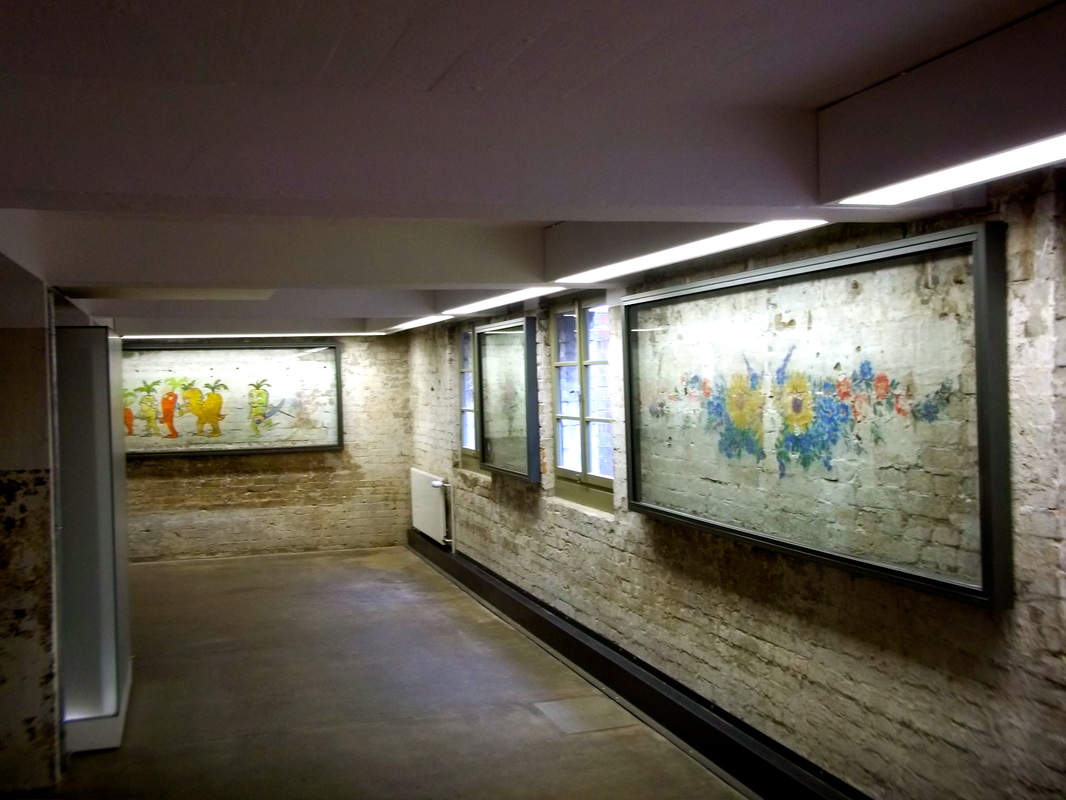 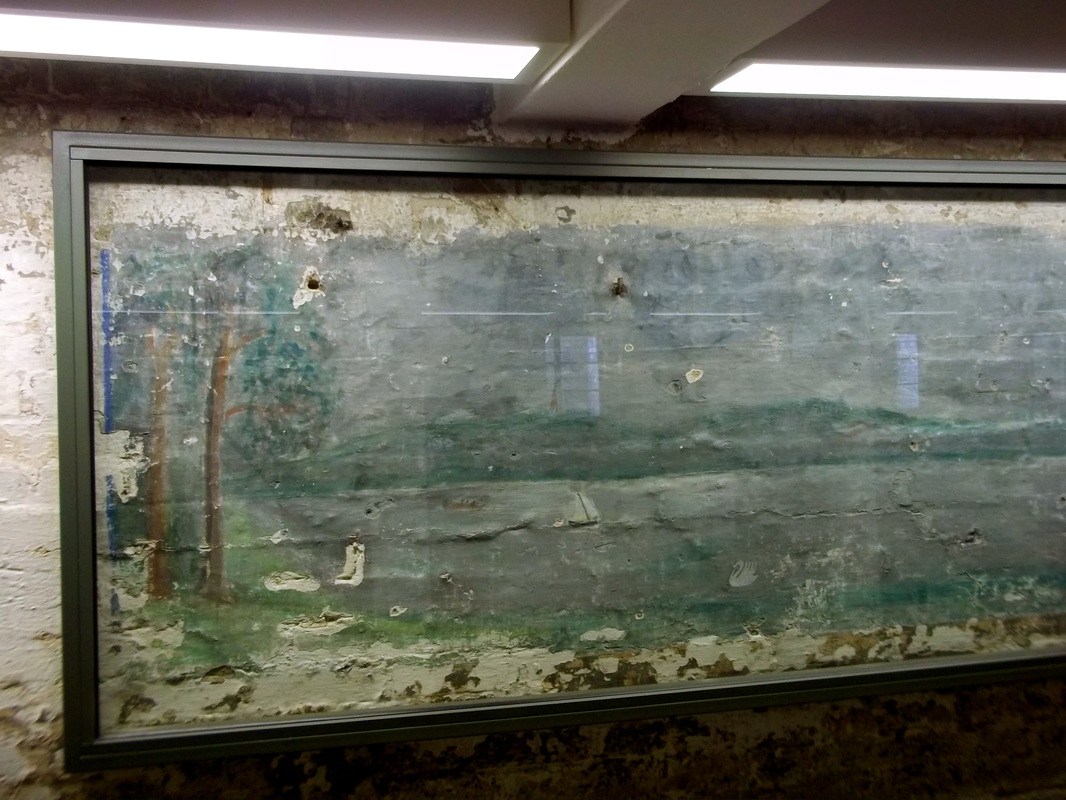 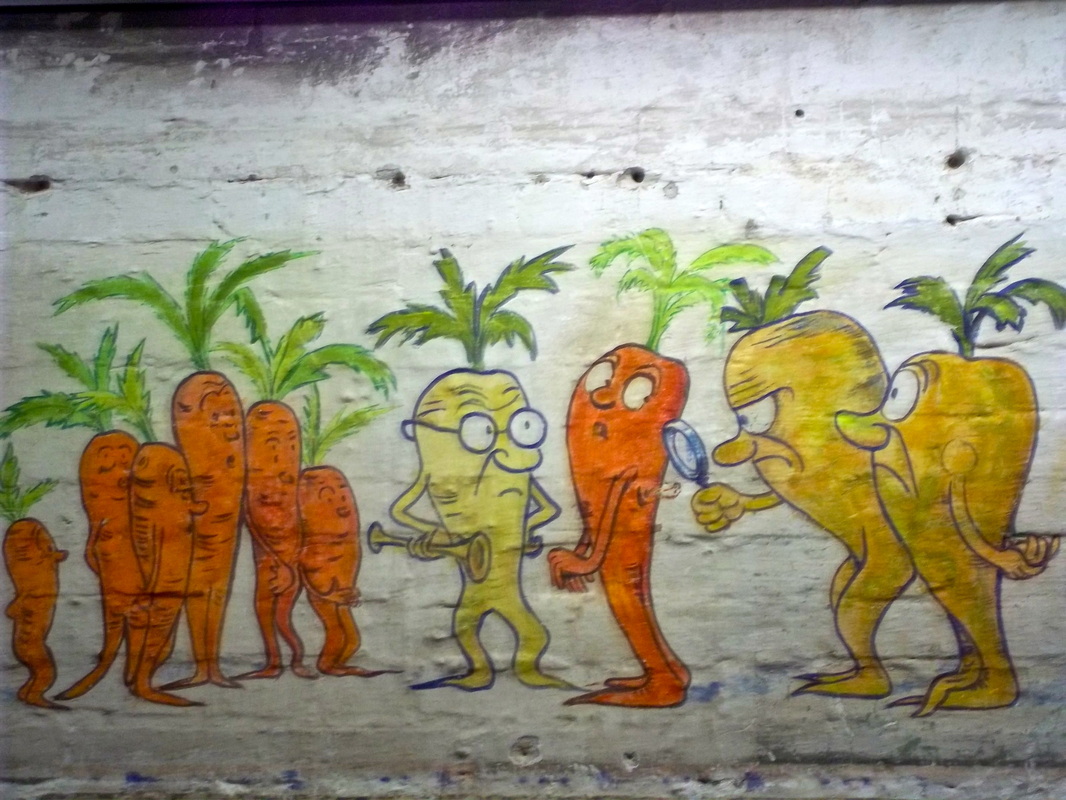 This one is of particular interest to me. I mean...what are they trying to say? Are the SS supposed to be the yellow carrots and the prisoners are the orange carrots and we're "inspecting them"? If that's the case, that's fine, but why? Why paint that. Whatever. They're just useless prisoners.
If you have any more questions, I'd be delighted to answer them. If not, I appreciate your patronage of our camp, and we hope you enjoyed your experience. Please exit as you wish, and I look forward to your written report.
Leave the Camp