The Government
and the Internet

Who’s Using, What’s Appropriate, Is It Taxable, and how the Government uses,
and misuses, the Internet 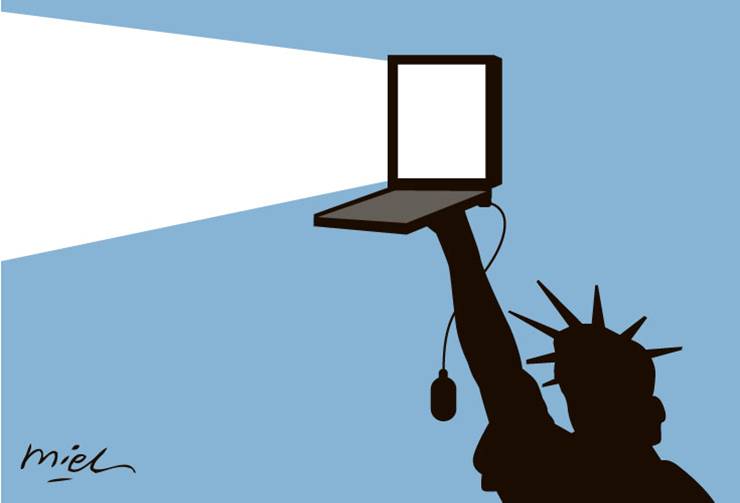 How does the government embrace the newest form of media, the Internet? In 2010, 81% of Americans reported using the Internet, and that number’s only expected to rise. However, the “speed” of Internet outpaces the “speed” of government, and in that, we tend to have problems.

Let's start with the basics, outlined in subheadings below...

Part I: Who's Using? 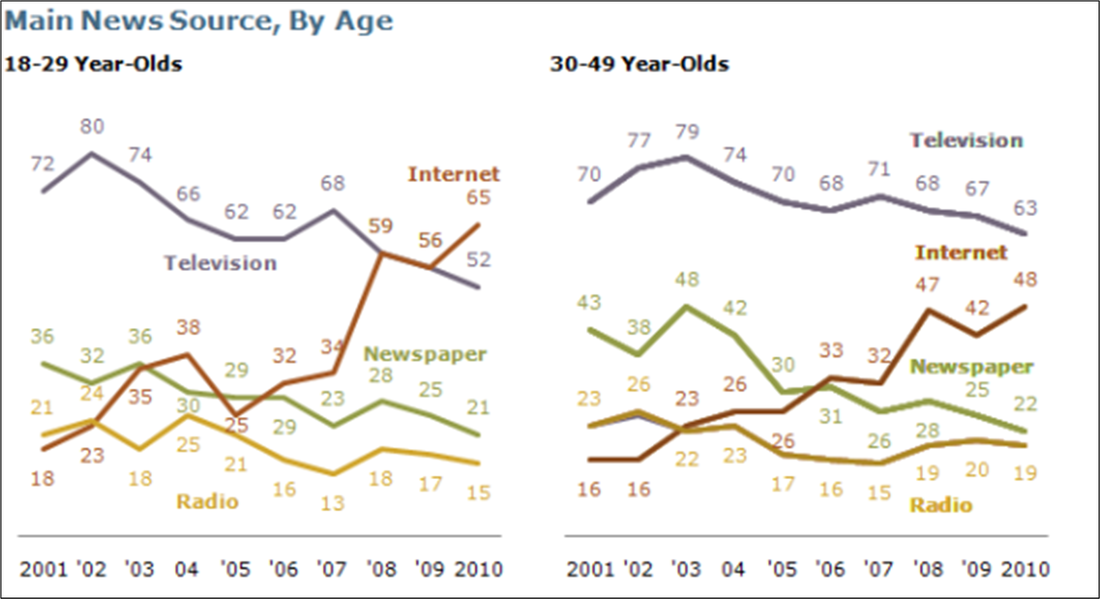 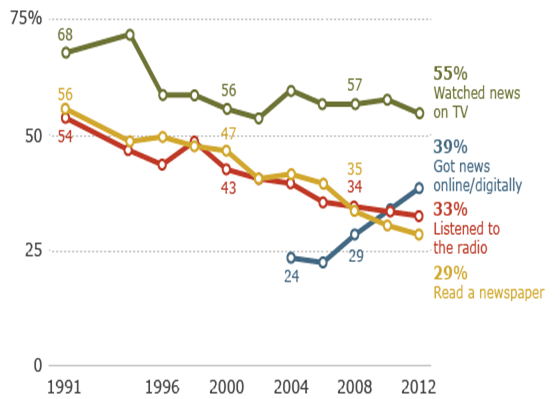 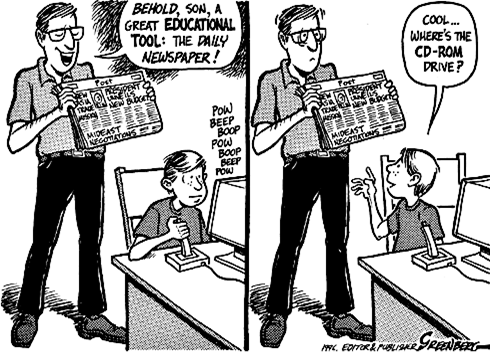 The reality is...THE NEWSPAPER IS DEAD! Sorry...don't tell your grandparents. But the above cartoon shows that the newspaper has been in decline for some time now. In fact, the above cartoon was published in 1996! You probably don't even know what a CD-ROM drive is, or even use a computer joystick when playing games (if you even play games)...but that's how long the newspaper has been in decline...

But NEWS is not in decline...it's just in "digital format"! 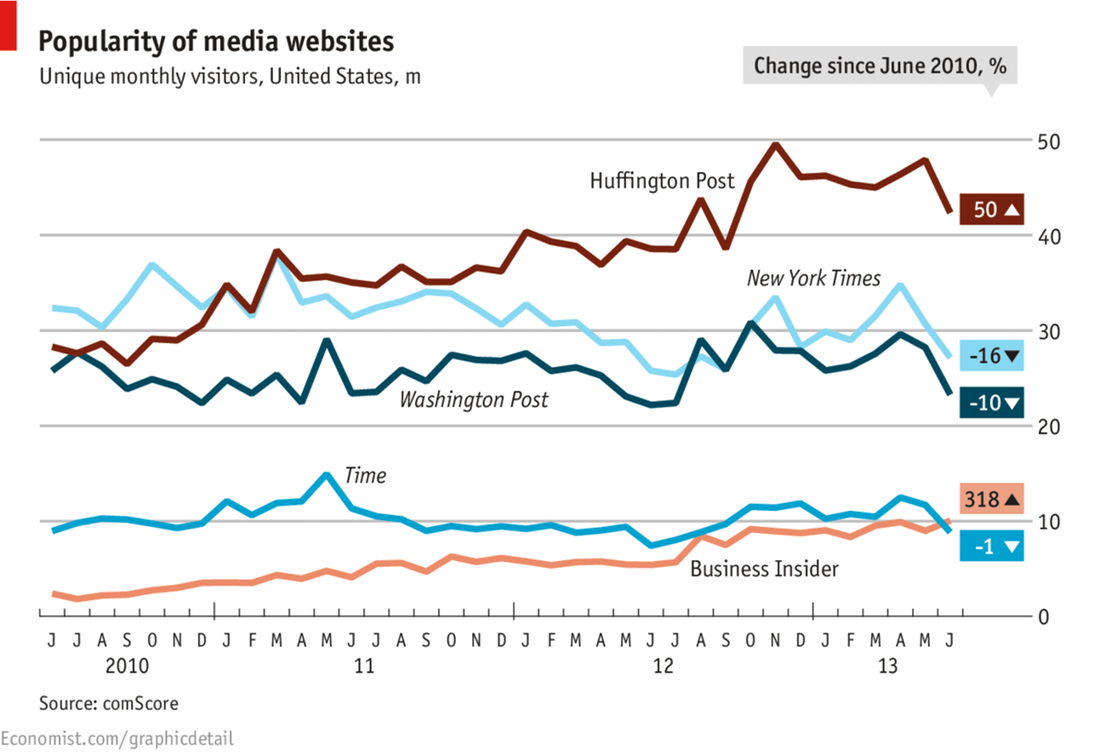 If you haven't heard of the Huffington Post or Business Insider, that's fine! Neither had The New York Times, Washington Post, or TIME Magazine up until a few years ago! We'll talk about them in a bit...

The conclusion here is that the Internet is now the news...

The Founding Fathers never told us about the Internet and how the government should interact with it. They never know about the topics of piracy, emails, pornography, and/or "bit torrents" and the impossibility of catching criminals! So how does the government regulate the Internet?
Click on the cartoons above to make them bigger, if you want. A landmark Internet case happened in 1997, titled Reno v. ACLU. It dealt with the publishing of pornography and Internet freedom.
We'll talk about the answer in class, but for now, just know that it was a heavily divisive issue, seen in the additional cartoon below. 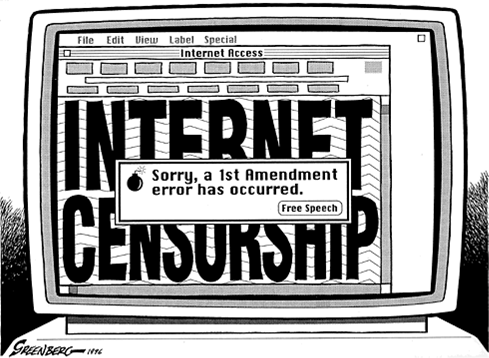 Internet censorship is a divisive issue. The United States allows for a very liberated Internet, but other countries, like China, advocate for stricter oversight. 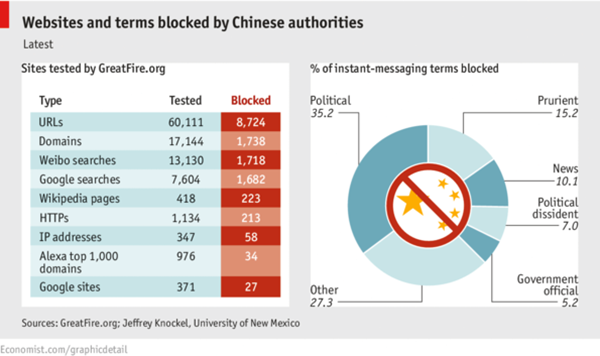 Part III: Is it Taxable?

...and there's the rub: How do you tax the Internet? More specifically, can the government collect tax revenue from online sites?

Firstly, click here for a short article from the Wall Street Journal about online retail and tax revenue. Then answer the questions provided below, and on your sheet. 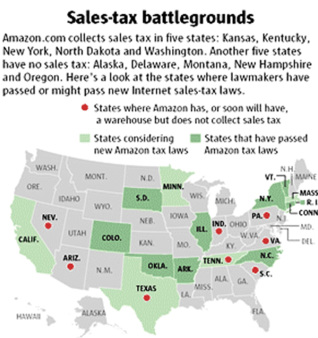 Part IV: The Government and the Internet 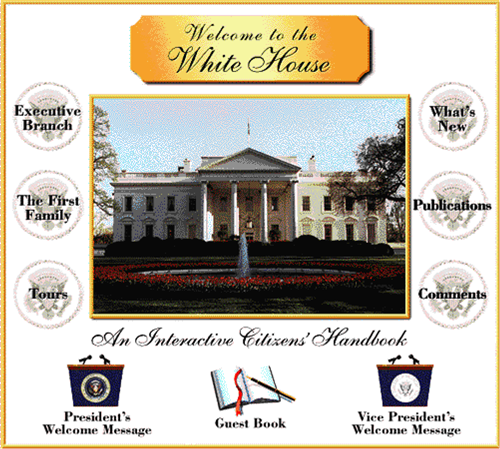 The above image is the FIRST WHITE HOUSE WEBSITE! Isn't it adorable?! In 1994, you could go to www.whitehouse.gov and even sign the guest book! It's changed significantly in the past 20 years... 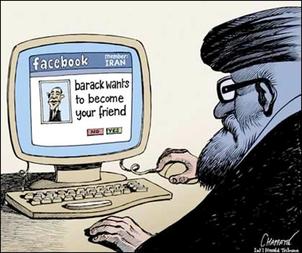 Today, the government has HAD to adapt to the changing times, and therefore uses the Internet to its fullest extent.

It was said that the Election of 2004 was the "blog" election. A "blog" (short for "web log") is an "online journal" of sorts where the owner can publish his or her own thoughts and ideas.

Election 2008 was known as the "Social Media Election" (and Obama utilized it well, as you can see in the cartoon on the left...) 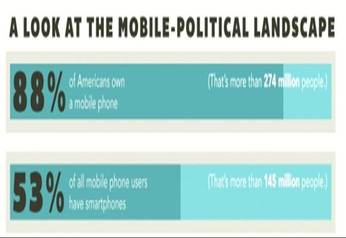 And Election 2012 was the "Mobile Election". As people become less and less reliant on traditional computers and laptops, and opt, instead, for their smartphones, the government has had to keep up!

The data on the right shows that 88% of Americans own a cell phone, and of those, 53% have a smartphone!

The question remains, if you are the government, how will you use this data? 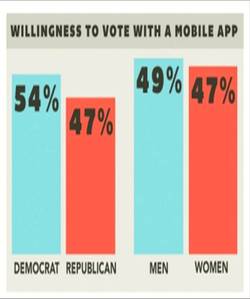 
Will you allow people to vote using an app? 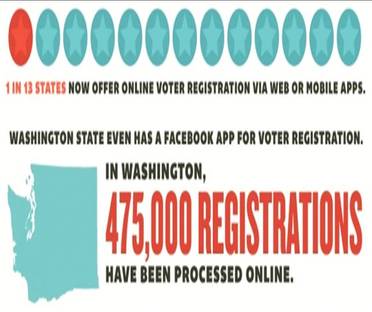 
Will you follow the example of Washington State and five (5) other states and allow for people to at least "register" to vote online?
It's probably easier for states to allow for these kinds of changes, and possibly too hard for federal elections for president and Congress. But how else can the federal government use the Internet? It turns out...quite effectively!

In the Election of 2012, the Democratic Party used the online tool known as VoteBuilder. Essentially, VoteBuilder allows campaigners to collect information on people as perspective Democratic voters! Either they're Republican (and they want to "turn them"...) or they're undecided. Regardless. It's an incredible tool! 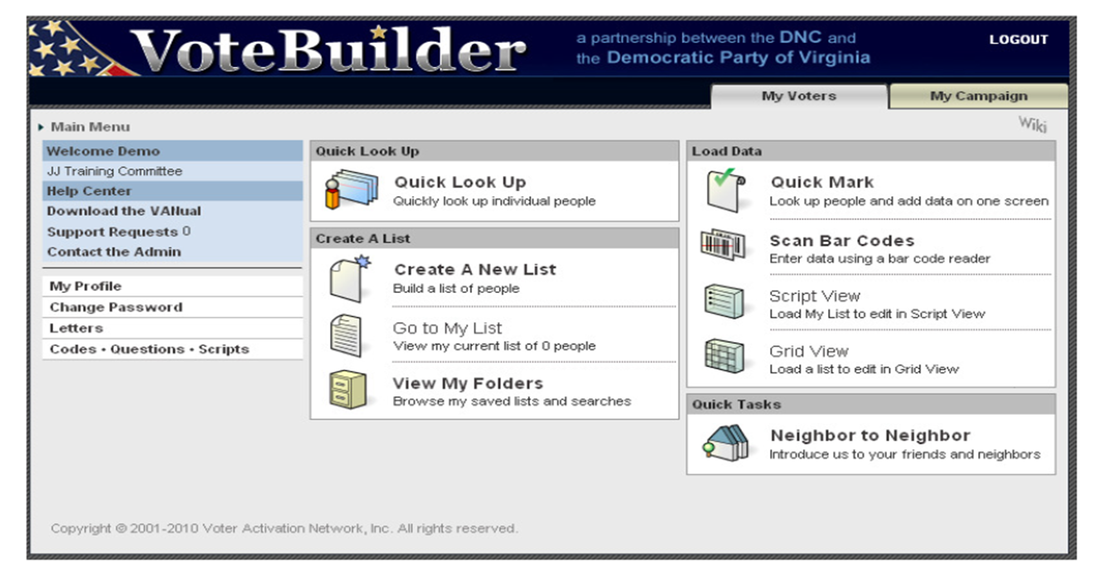 When users log in, they can make lists of who they want to contact, but more importantly, they can "Quick Look Up" ANYONE THEY WANT TO!! 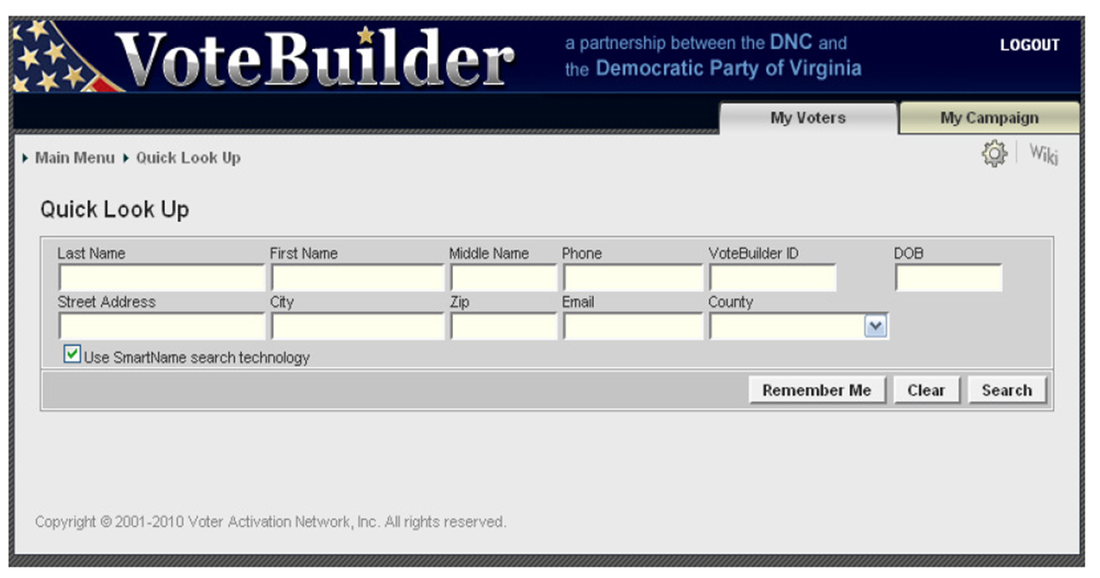 ...and now you can see PERSONAL INFORMATION ON ANYONE YOU WANT TO!!

...and then you can MAKE A MAP OF THESE PEOPLE, and divided it up among people to see WHO SHOULD TARGET WHOM!!! 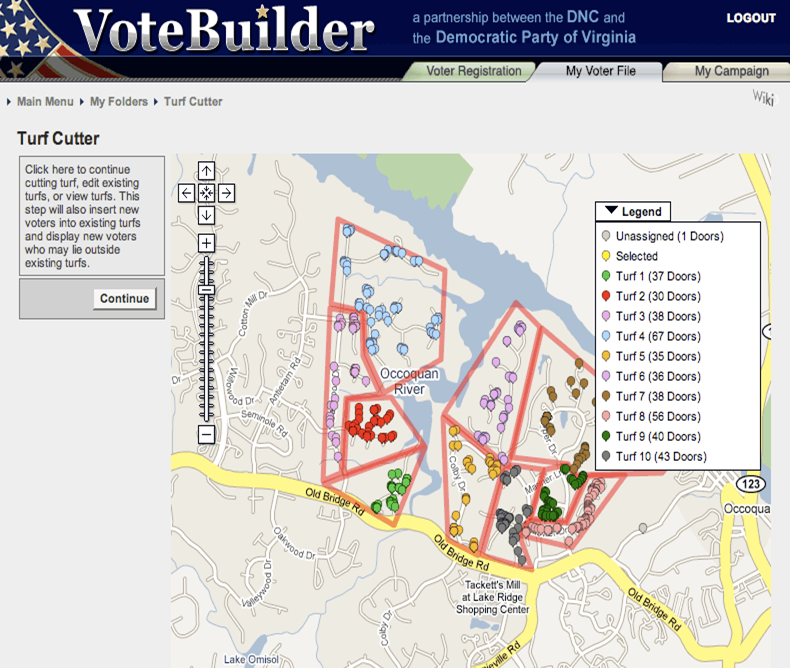 INCREDIBLE! Genius? Yes! Invasive...Yes! Both. But that seems to be the future of politics.

But...how did they get this data? That's the question! The answer: You're being tracked, and you don't know it. We'll talk more about that in class...