WELCOME TO THE
GEOFFRIN SALON! 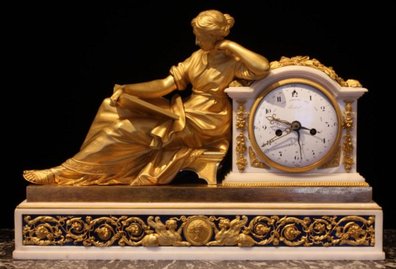 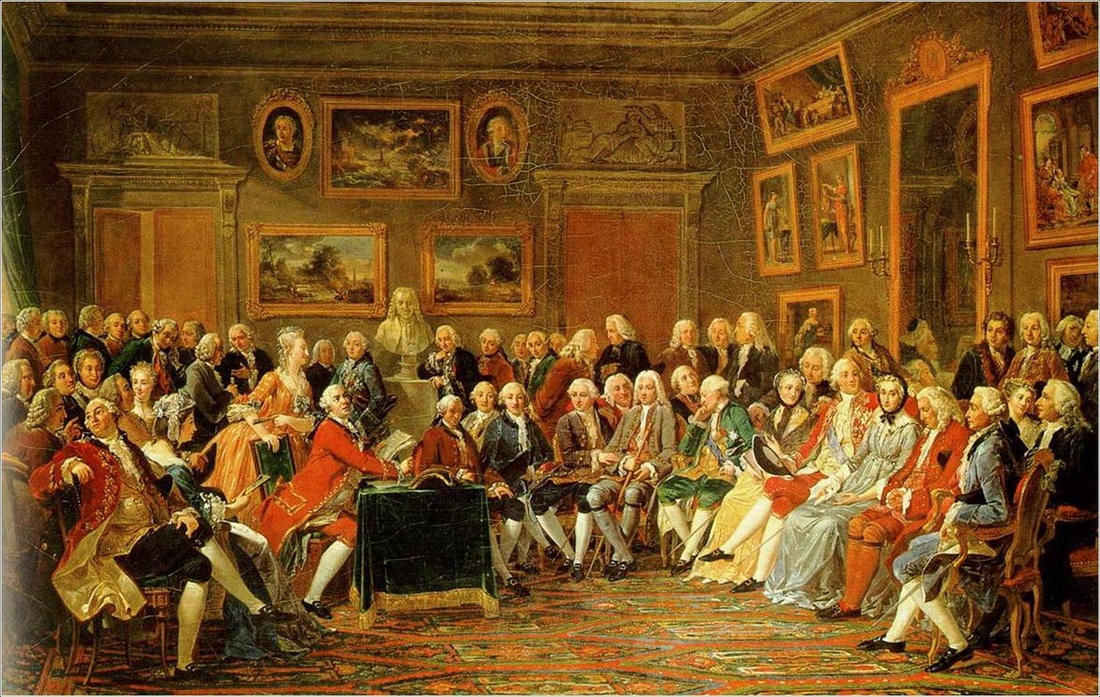 We cordially thank you
for accepting our invitation!

Please pick up your etiquette card upon entrance. It informs you of your seating assignment, the proposed topics of discussion, and some suggestions on wine and cheese pairings as well... 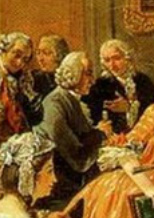 May we be so bold to say that you are in the company of greatness!

Look to your left and you'll see the political genius himself: Jean Jacques Rousseau! Fresh off of writing his "Social Contract", we hope he'll regale us with some of his thoughts on government! Be sure to grab his attention at intermission: rumor has it that this whole "social contract" thing has taken the new country of America by storm. Supposedly Thomas Jefferson sleeps with a copy of it under his pillow...

And speaking of government, look across the room. That's the Baron de Montesquieu! I wonder if he's seen Rousseau yet. The two get into such heated debates! But personally, I think it's because Rousseau's just jealous of Montesquieu's financial success with Spirit of Laws. It's the number-one seller at the local book shop! He's one of the richest men in France! But he never misses a Geoffrin salon debate. He says that's how he sharpens his teeth for his writings! 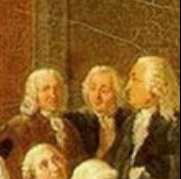 Speaking of "Number-One Sellers", that's Denis Diderot over there, in the middle, talking to some of the other philosophes. If Rousseau and Montesquieu are so famous, they probably have Diderot to thank, as he took all of their writings and published it in his Encyclopedia! It's fair to say that without this man, the Enlightenment as a whole might not have happened... 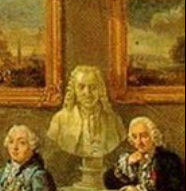 It's a shame François-Marie Arouet couldn't make it today. Oh, you probably know him as Voltaire. He's probably in Western Russia right now, detailing his philosophical thoughts to none other than Catherine the Great. Voltaire seldomly shows up, as he's so busy with his social engagements. So we always keep a bust of his head in the back of the room. You know...for inspiration.

...and speaking of inspiration, none of this would be at all possible without the madame herself: Marie Thérèse Rodet Geoffrin! Of all the people in the room, she's the real superstar. Yes, she's privately educated, and yes, she's the daughter of privileged nobility and financiers, but she stands for women's rights! She's taken the image of a typical "hostess" and transformed it into a badge of honor! According to Geoffrin, women are not just housewives! They're not just gossips! And they're certainly not the "weaker sex". She usually just observes the debates and maintains the civil atmosphere, but everyone knows not to cross her. And if they do, they won't get their party favors! (She's famous for those...)
But ssshhh! They're about to start! The topic of today is the newly released Progress of the Human Mind by Marie Jean Antoine Nicolas Caritat. Did you have a chance to read it yet? If not, there's a copy of it at the back of the room.

Read the pamphlet below and then answer the questions. You don't wanna look stupid in front of all these philosophes!

Nicolas de Condorcet was a key figure of the later Enlightenment; his views on the equality of the sexes and of races placed him far in advance of most contemporaries. Perhaps more than any other philosophe, too, his thought reflected an unswerving faith in human progress.Those qualities are readily evident in the following excerpts, drawn from his posthumously published Outlines of an Historical View of the Progress of the Human Mind. Condorcet himself was a victim of the French Revolution. He was denounced as a traitor and went into hiding after criticizing the revolutionary regime’s proposed constitution, but was eventually captured and died in prison.

A class of men speedily made their appearance in Europe…[who] made it their glory to eradicate popular errors, thus aiding indirectly the progress of mankind...

In England, Collins and Bolingbroke, and in France, Bayle, Fontenelle, Montesquieu fought on the side of truth with all the weapons that learning, wit and genius were able to furnish…These writers were uniform in their vindication of freedom of thinking and freedom of writing. They spoke against the crimes both of fanatics and tyrants, exposing every feature of severity, of cruelty, of oppression, whether in religion, in administration, in manners, or in laws.

Such was this new philosophy. It was everywhere received, and everywhere persecuted, having kings, priests, nobles and magistrates among the number of its friends as well as of its enemies...It frequently happened that a government rewarded them with one hand, and with the other paid their enemies [to spread lies about] them…

The art of printing had been applied to so many subjects [that books] were so admirably adapted to every taste, every degree of information, and every situation of life. They opened so many doors to truth, which it was impossible ever to close again. There was no longer a class or profession of mankind from whom the light of knowledge could absolutely be excluded. Accordingly, though there still remained a multitude of individuals condemned to a forced or voluntary ignorance, yet was the barrier between the enlightened and unenlightened portion of mankind nearly effaced, and an insensible gradation occupied the space which separates the two extremes of genius and stupidity.

Thus there prevailed a general knowledge of the natural rights of man; the opinion that these rights are inalienable and imprescriptible…These principles became the common creed, the symbol and type of all men who were not idiots on the one hand, or, on the other, assertors of the policy of Machiavelism. In some countries these sentiments formed so nearly the general opinion, that the mass even of the people seemed ready to obey their dictates and act from their impulse.

The philosophers of [all] different nations [were]…animated by the sentiment of universal philanthropy. They [spoke out] equally against injustice, whether existing in a foreign country or exercised by their own country against a foreign nation. The philosophers of France and England gloried in assuming the duties of being friends to those very negroes whom their ignorant oppressors disdained to rank in the class of men. [They praised] the toleration granted in Russia and Sweden…

It has never been supposed that all the facts of nature can be exhausted by the human mind. But man learns to class them, and reduce them to more general facts. Truths…will after a time, be unfolded and proved in methods that are not above the efforts of an ordinary capacity. And thus, [they should continue to debate, discuss, and discover]. The more [truths that are discovered], the simpler [the answers shall be found], and open a farther career to genius…