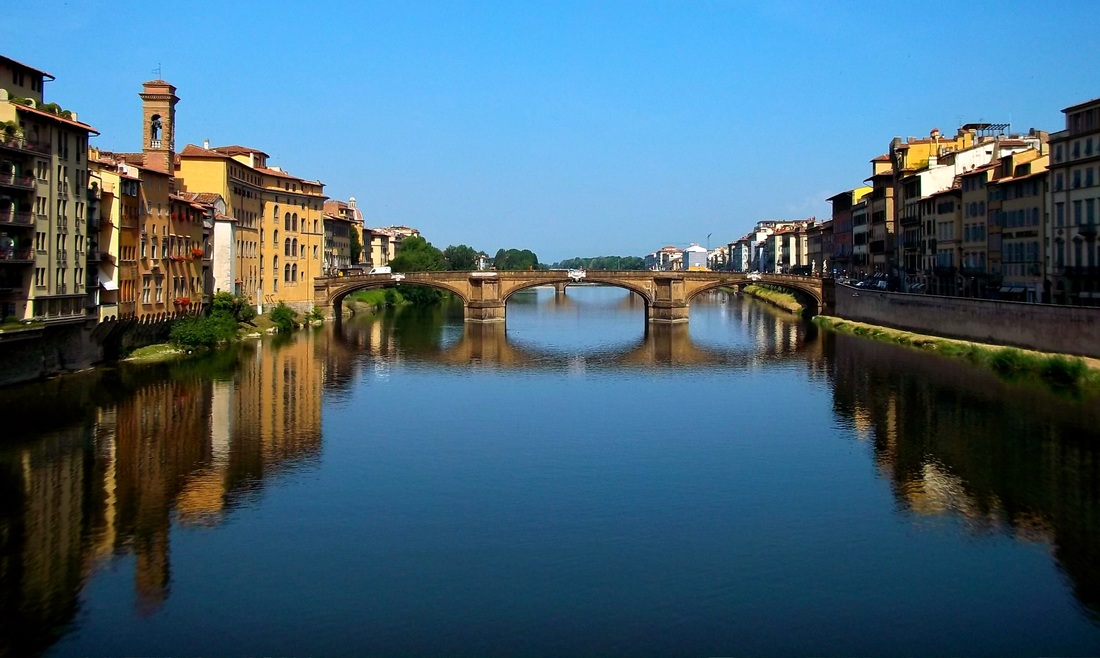 The city of Florence is built along the River Arno. It gives us our life force: transportation, trade, and territorial boundary. 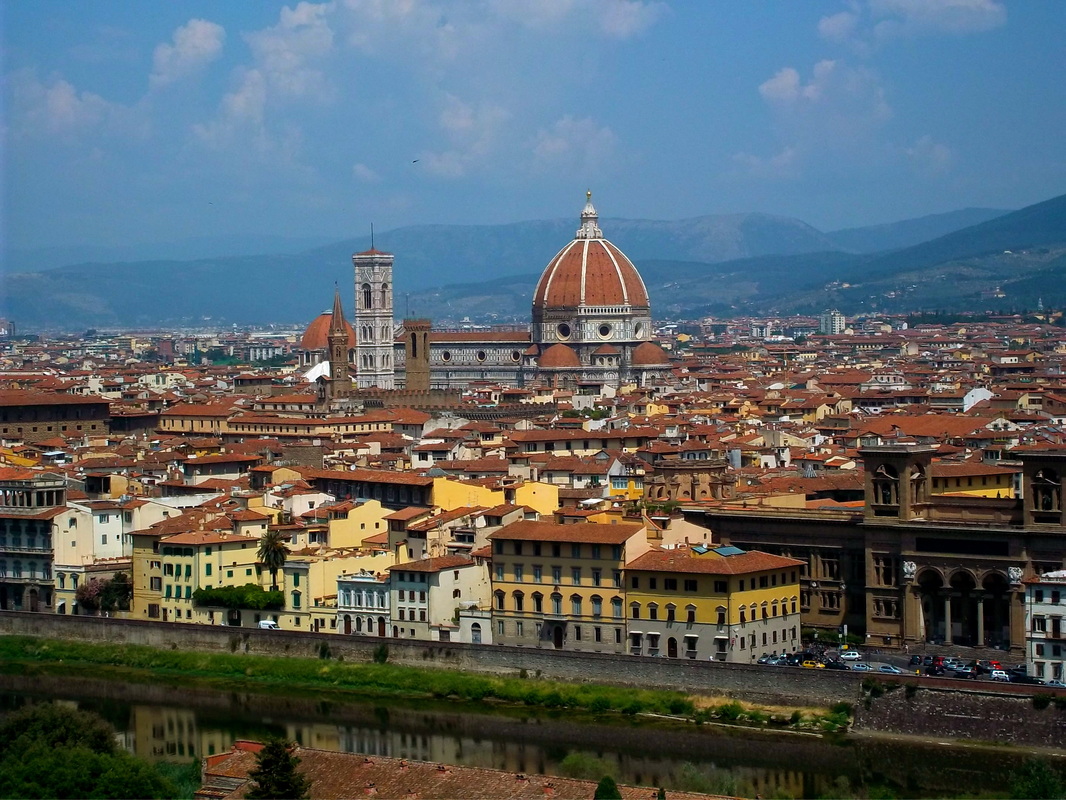 You are now standing atop Michelangelo Hill, named after...who do you think? If people know Florence for one thing (and it's a shame if they can only thing of one...), they know it for Michelangelo's David. But we'll get to that later. You can see the River Arno in the foreground, and in the background is the famous Il Duomo atop the Basilica di Santa Maria del Fiore, loosely translated as the Florence's St. Mary's Cathedral. In my opinion, that truly is the crowning achievement of the city. But we'll get to that later. 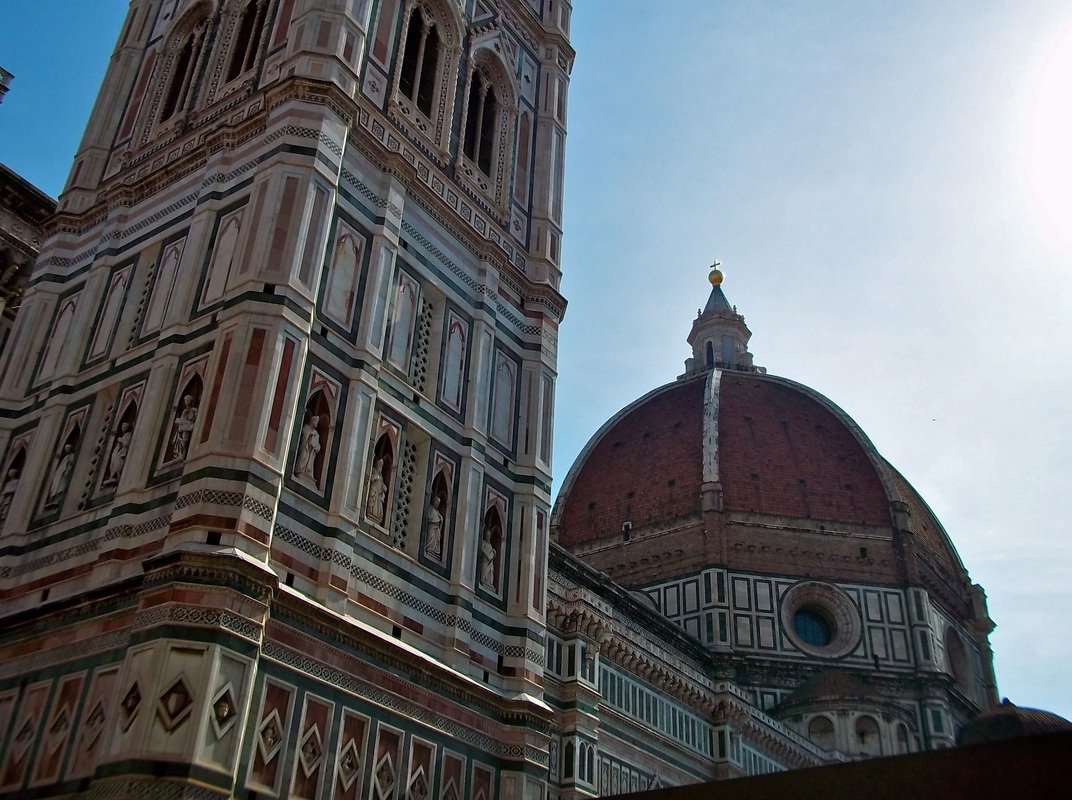 To the outsider, the Church may appear "painted" with pastel colors, but in reality, the pinks, greens, whites, and oranges are actually the natural colors of the marble. Even today, Italy is known for its marble exports. 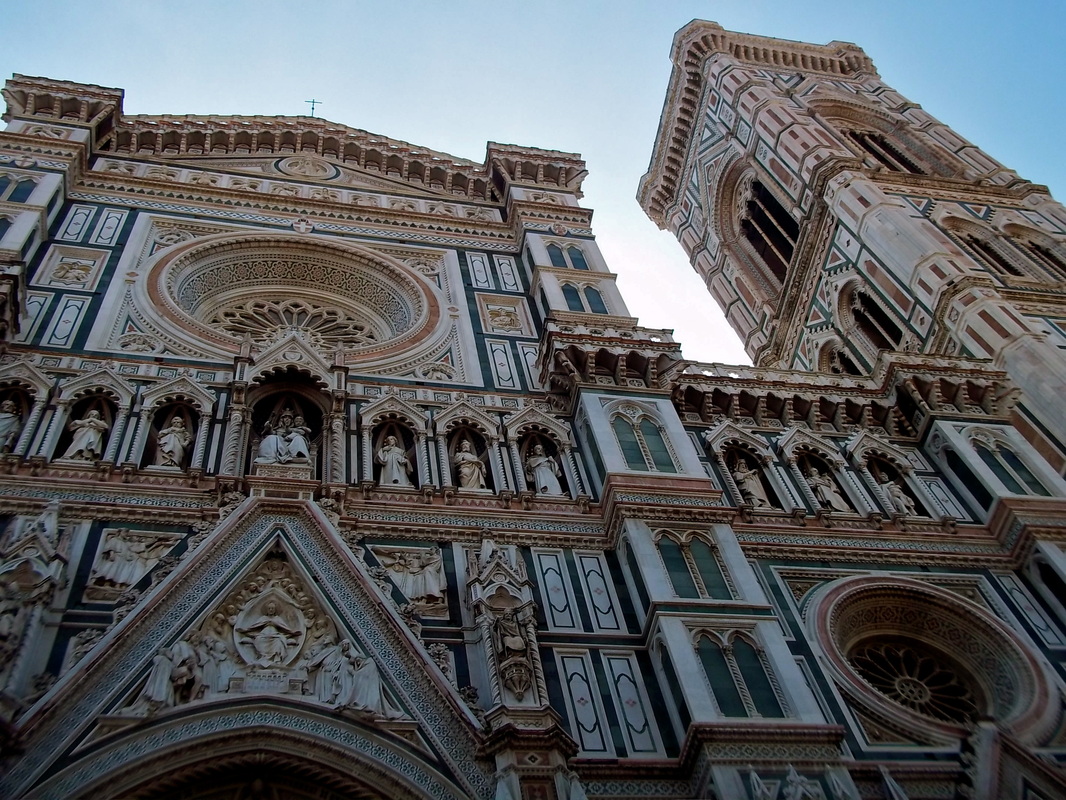 The church was not built to honor me or my legacy, but to celebrate the Virgin Mary. She might be hard to see, but there she is, halfway up the picture, fourth statue from the left, holding Christ the Child. The structure on the right is the bell tower, built and designed by the artist Giotto, whom you'll learn more about later. If you were to make a 180-degree turn from the Cathedral, you'd come face to face with a building known as the Baptistery. The legend of this building's doors, however, is perhaps more interesting than its overall construction, for it involved in an artistic showdown of sorts between two of Florence's most celebrated artists. 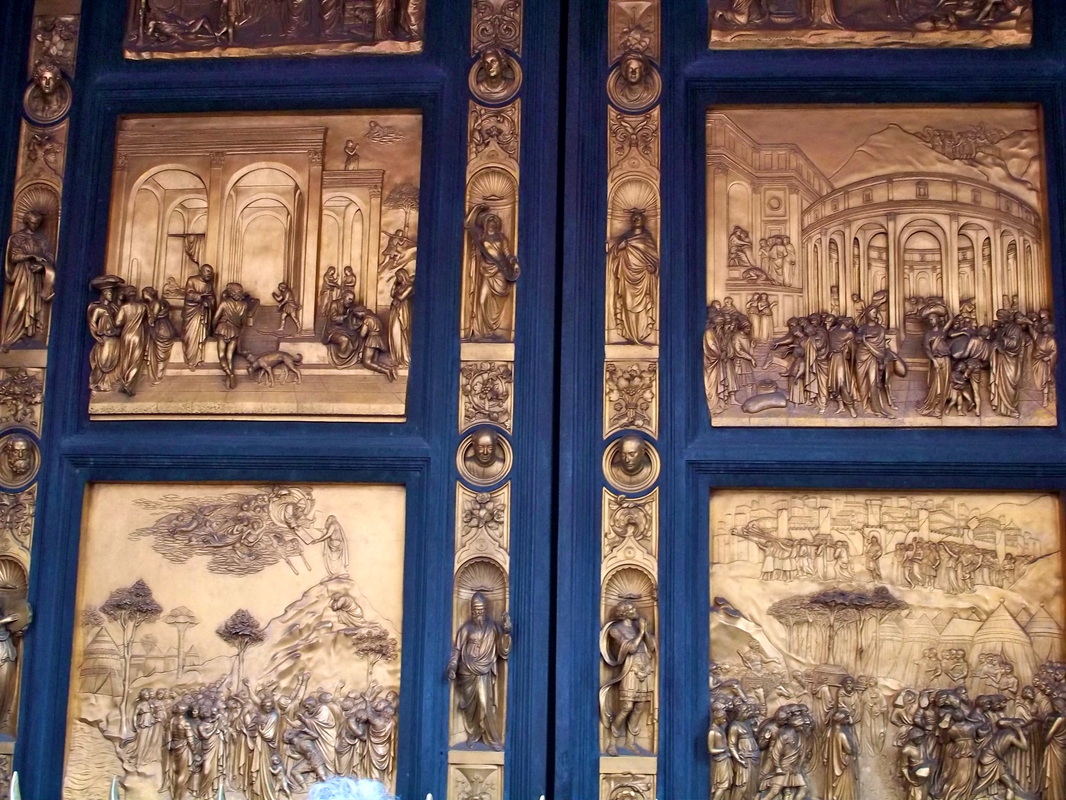 Filippo Brunelleschi and Lorenzo Ghiberti were two of Florence's best artists who competed, amongst others, to see who would be awarded the job of completing the doors of the Baptistery. What is a "baptistery"? Put simply, it's a building, separate from the cathedral where both the unbaptized could go (they were not allowed in the cathedral) and where young children could be dedicated to the church. Though Brunelleschi amazed everyone with his talents, it was Ghiberti who was awarded the job of completing the doors. Brunelleschi's "time in the Sun" would come later, with the building of Il Duomo, Florence's most iconic feature. So don't feel too bad for him!

What was it that won Ghiberti the job? Look above, and below. It was his intricate metal carvings that adorned the Baptistery doors. 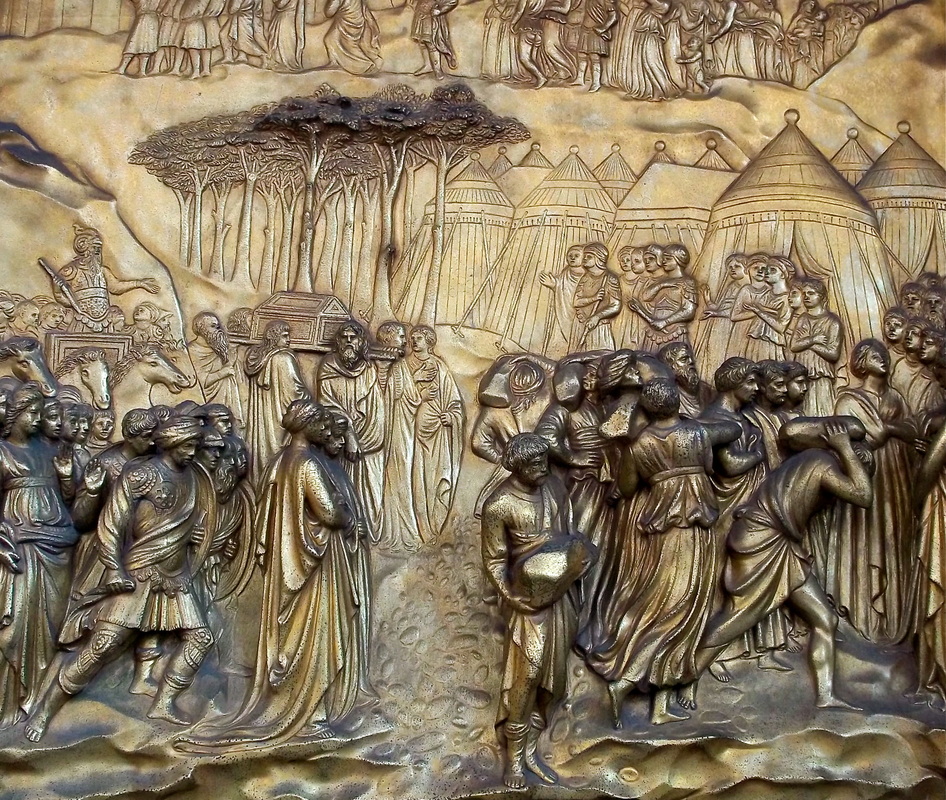 Scenes from the Bible were carved out of solid gold. It was no secret that most of the laypeople of Florence were illiterate...but they could see. Artists like Ghiberti and Brunelleschi created "visual Biblical stories" so that even the "dumbest of Christian" knew the glory of God.

On the Bell Tower, Giotto too would include the same relief etchings, and although these were not made of gold, the story of Adam and Eve is plain to see as, from left to right, Eve takes the apple from the tree, gives it to Adam, and in the third frame, they are banned from the Garden.

Let's move away from the center of town, away from the cathedral, Il Duomo, the Bell Tower, and the Baptistery, and journey toward my "political offices"...

As they did 500 years ago, people flock from all around to the Piazza della Signoria, the "Square of His Lordship", to see my statues, my artwork, my architecture, or simply to get a view of high society. You can see, right at the entrance to my main office...there's Michelangelo's David. Well, it's a replica, because years later, they'd move the original one into a museum. Still, all the rest are the original, and I'd like to show them to you now. 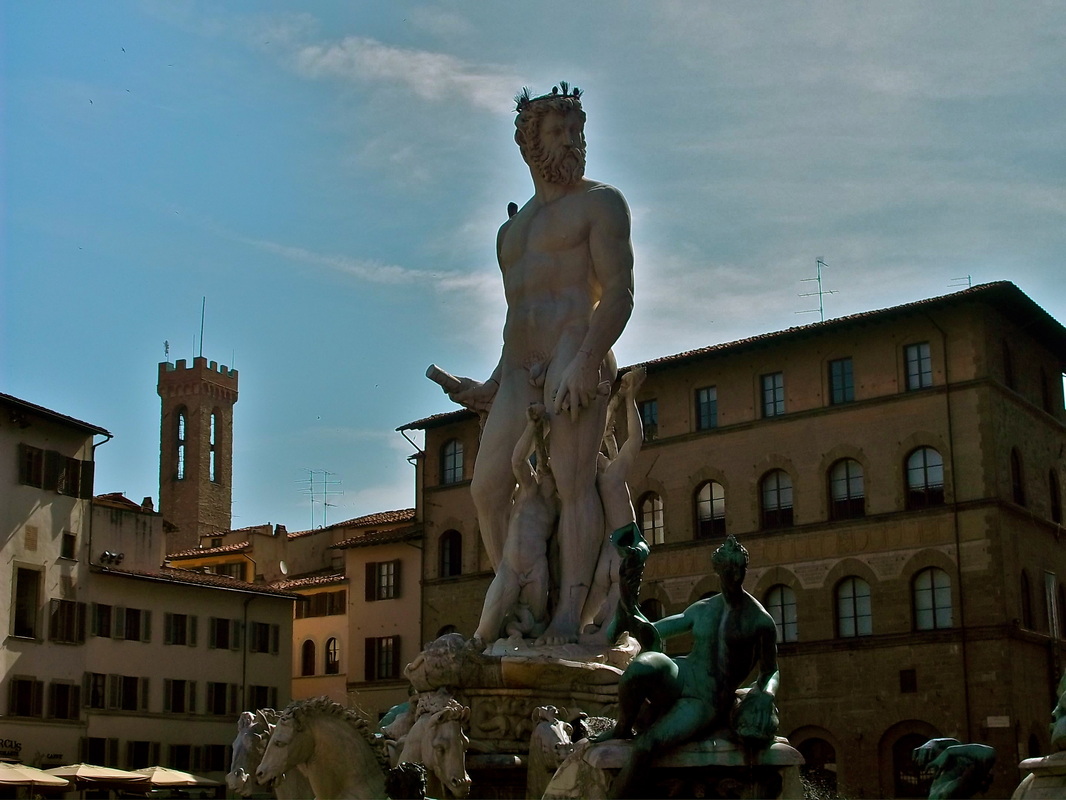 Let's continue on. One of my favorites shows Perseus With the Head of Medusa. Violent, yes? 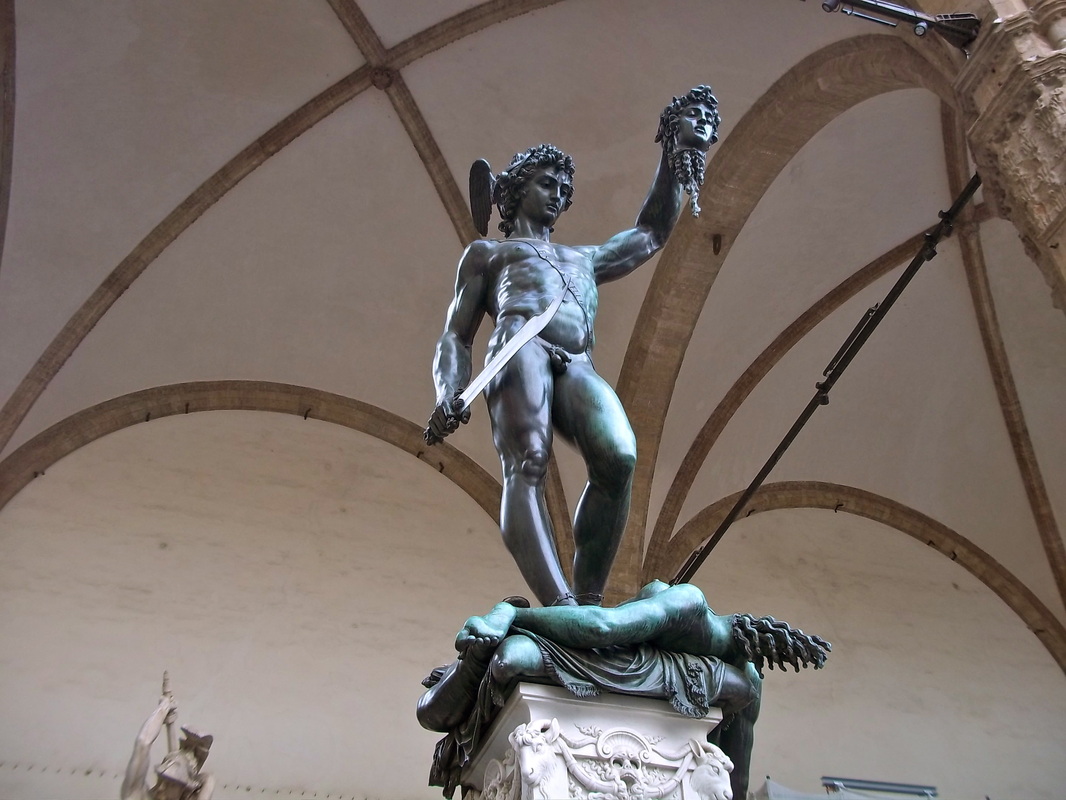 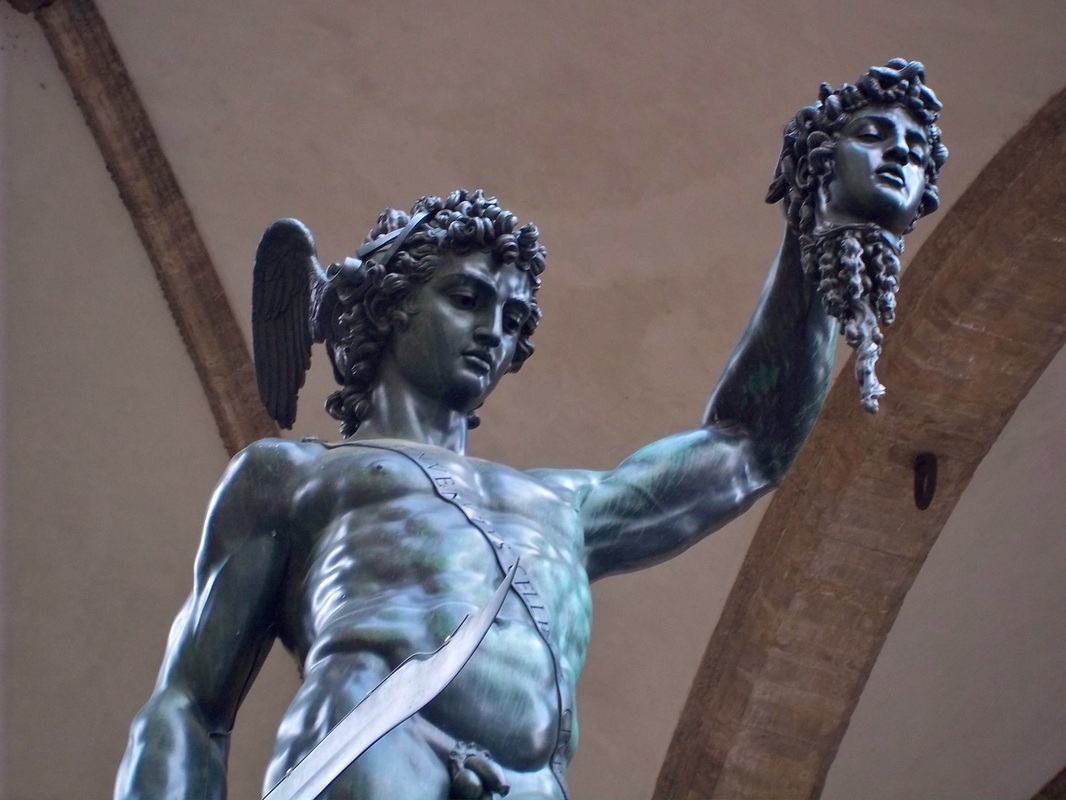 Just look at that metallic-dripping blood! Is it any wonder that Florence was the city that most patronized the arts?

And then we have the Rape of the Sabine Women. Yes, another violent image, but take a look:
The picture on the left focuses on anguished face of the woman. The picture on the right focuses on the backside of the attacker. If you were to continue around the sculpture in a 360-degree fashion, you would see that the artist built this to feature three intertwined figures that allows no single dominant viewpoint. In other words, there's no "front" or "back" of the statue. The artist, Giambologna, claimed that he had created it solely to “demonstrate the excellence of his art” - just, "showing off", basically - and it was, in fact, immediately celebrated as his crowning achievement. Yes, we Florentines certainly have the best art here!

Before you go, I want to show you one last feature of my city. 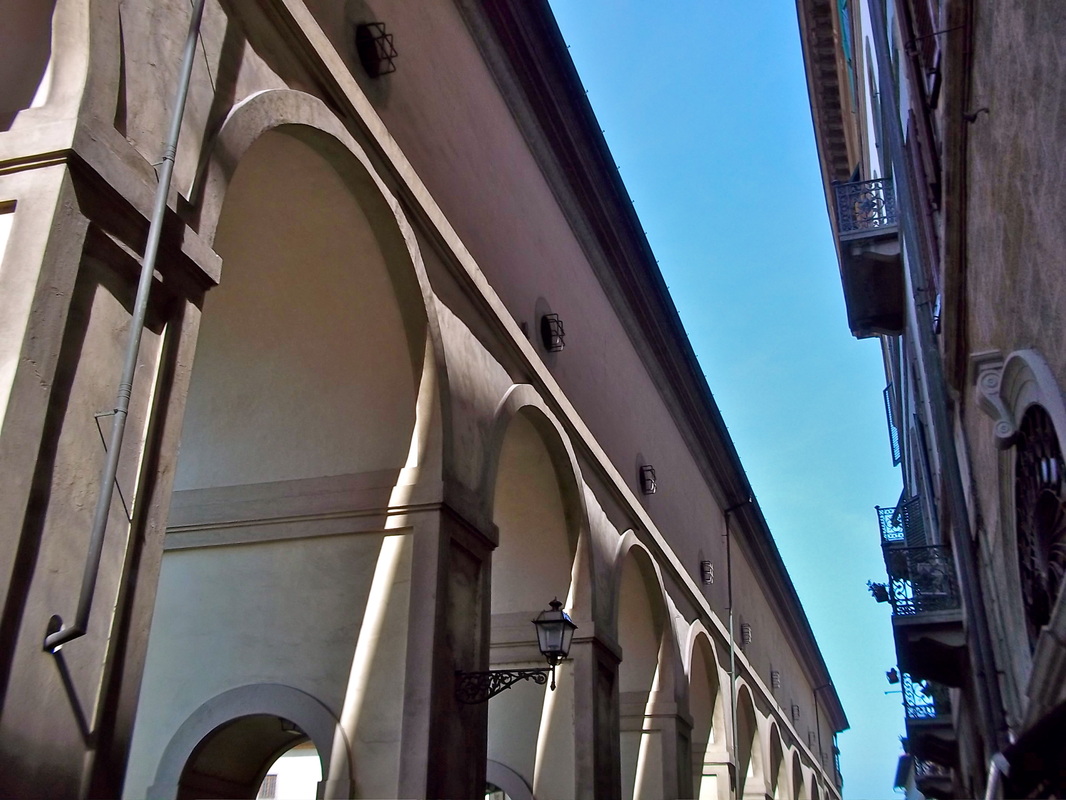 See those portholes high up on the building on the left? It's actually a "secret passageway", of sorts. Yes, I wanted to be in my city, but not of my city; I wanted to walk around it, but not through the masses of people. So, I walked above it. And the little portholes allowed me to listen to the comments (and hopefully compliments) of the people about me and my rule. 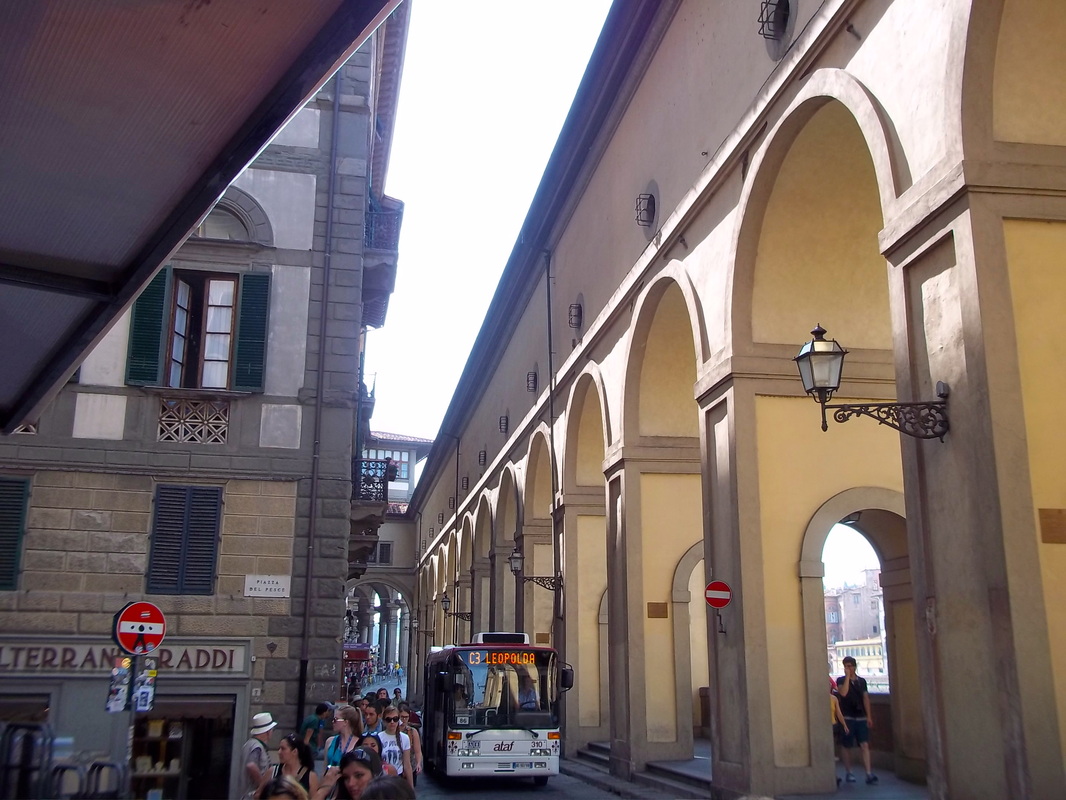 The author Niccolo Machiavelli says that a leader should desire his citizens to fear him, rather than love him, but I say...what better way to hear both? My secret passageway journeys along to the Ponte Vecchio, the "Old Bridge", as its known, home once to butchers who threw their discarded meat trimmings into the water, but now the residing location of the city's gold traders. 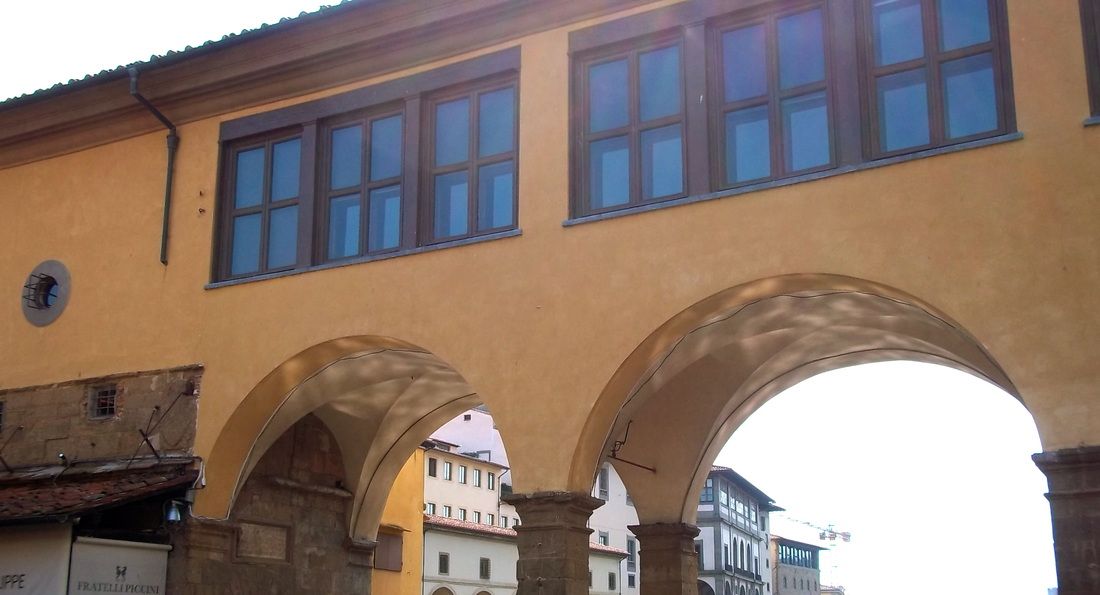 So that's it! My time with you is done, but before you leave Florence, I'm going to have my grandson, Lorenzo, continue a bit of our story. Click on the link below:
Lorenzo De' Medici