Yes, the buildings are fine and plain to see. But what about the prisoners themselves? Firstly, let's talk about classification. 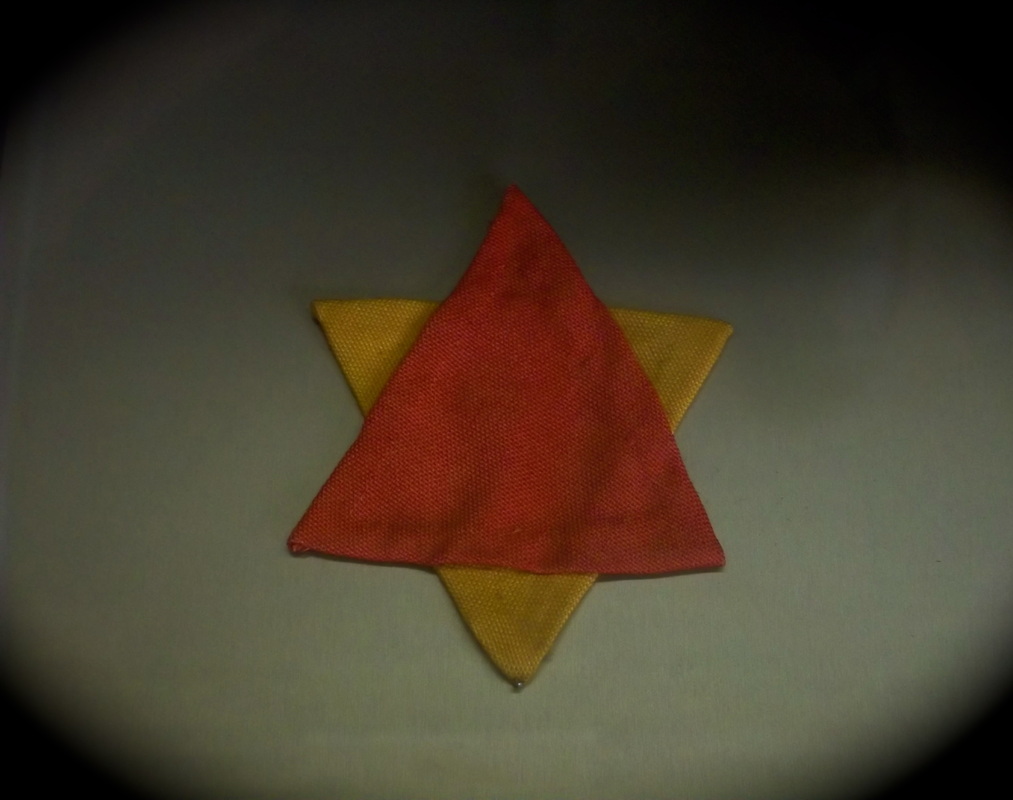 I know you know about the colors classification, right? You don't? My apologies. Let's go over it. 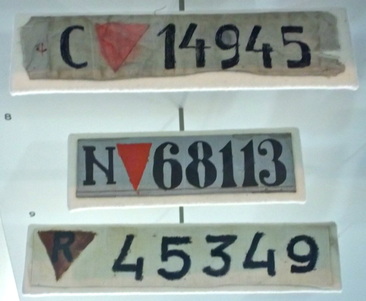 Just for your reference, even though you don't see them here, the following "color triangles" are as follows:

If I were the "rank" the colors, just for your reference, I'd say it probably goes something like this:
So, now that you understand the "class" of prisoners we keep here, let's talk about treatment. 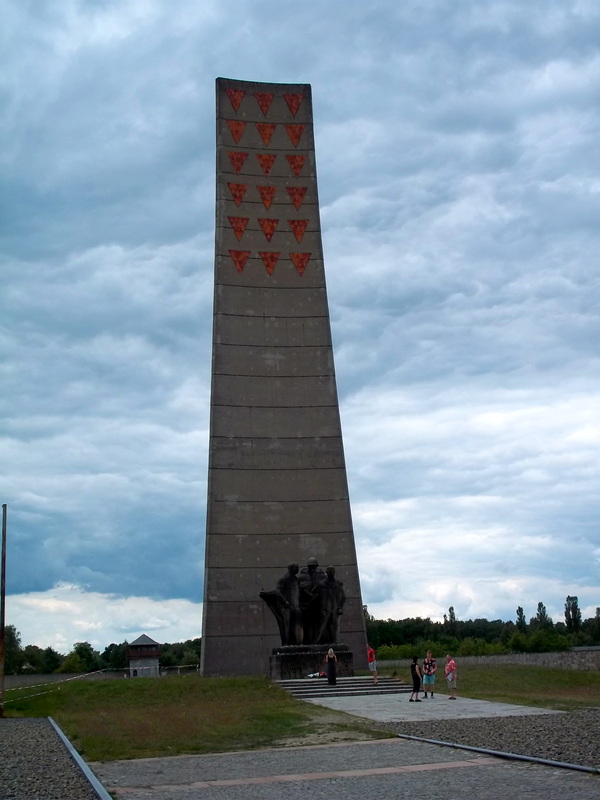 Every prisoner meets for "Appel" (roll call) every morning, and depending on the day, roll call may or may  not take an hour or so. As you know, it depends on the enthusiasm and promptness of the prisoners. They line up in front of this pillar here. You can see the red triangles on the top to remind them that this camp is, chiefly, a political prisoner camp. You can also see the lines behind which the prisoners line up. 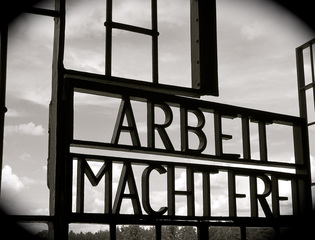 As you can see, the famed phrase, Arbeit Macht Frei ("Work Will Set You Free") is literally welded into the fences and gates surrounding the camp.

And yes, this is a work camp! As long as the prisoners work and keep their heads down, there won't be any problems...
As far as "work" is concerned, a few of our prisoners have recently been employed in "shoe testing". We're developing new rubber-soled shoes for our troops, and our prisoners will test them out. Would you like to see the site? It's just over there: the gravel area that kind of looks like a track. 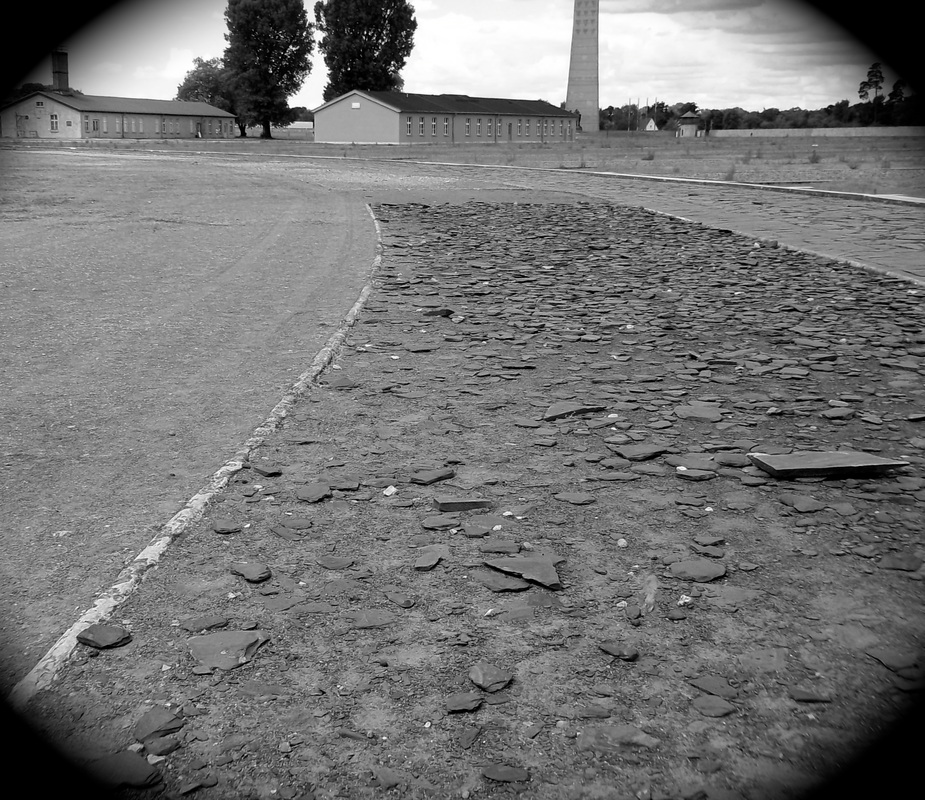 The "Schuhprufstrecke" ("Shoe-Testing Track") is pretty easy to understand, and hey, it makes some money too! Shoe manufacturers in Germany pay the SS ("Schutzstaffel") for every prisoner who "tests" their shoes. Every day, the shoe testers are given different shoes. Our SS will often times make the prisoners wear shoes that are too small for them, so yes, blisters may result, but more importantly, we see if the shoe "holds up" under "less-than-perfect" conditions. We will also force the prisoners to carry heavy sacks of sand to further test the integrity of the shoe. We currently employ 120 to 170 "shoe testers" every day. Back and forth they walk, and if they fall, they must stand up, and run the rest of the way. 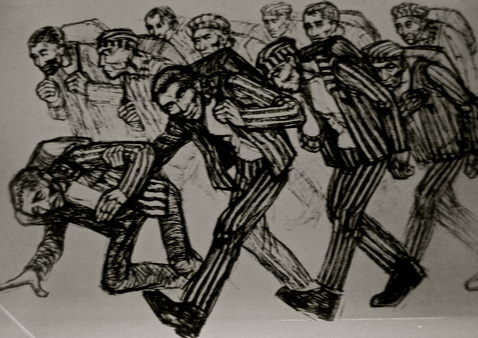 And I'm sick of images like these! I found this under the bunk of one of our prisoners! Yes, it's backbreaking work, but what did they expect to do here at a work camp?

If any of these prisoners
"act up", rebel, or plot any vengeance against the SS, well then, it's straight to the Zellenbau (the "Z-ward") for them. That's where we keep the worst of prisoners...
Any questions so far? Remember, this is a work camp. Our prisoners make bricks, make parts for ships and barges, and though I don't want to comment too much on it, some of our prisoners are employed in counterfeiting operations...but not in the way you think! We're forging British and American currency and hope to flood their economies with useless paper money! Heck, we might even "air drop" it over the cities! We also falsify passports, birth certificates, bank notes, etc.

In that sense, yes, "work time" is "unlimited": there are short breaks for food at midday and evening. Often times, prisoners only get four (4) hours of sleep every night; there is no "free time". If you were to ask many "why they're here", they will reply that, "I am considered 'politically unreliable'". And yes, that's the case! You are not a valued member of the Third Reich!

I'm sure you want to know about the "integrity" of the camp. So, if you follow me, we'll discuss that in the officer's building.
Camp Integrity