Dante's Inferno is heavily misunderstood: it's not anti-God, and it's not even anti-Church! In fact, there are a lot of redeeming qualities about it. But, I gotta tell you: it's unbelievably famous. When reading it, my words might conjure up images of Charles Dickens' A Christmas Carol or even J.K. Rowling's Harry Potter characters. You might even say that the modern "image" of Hell comes from my poem!

I'd like to lead you through it now, but first, a little background.
I want it to be known that I was never declared a heretic. I was given a hero's (and Christian's) burial upon my death. Scholars may misinterpret, by any "anti-Christian" sentiments in my book are directed at the spiritual heresy of current political structure of Florence! In fact, the Comedy is steeped from beginning to end in a spirit of the warmest faith in the great Christian doctrines. It was my intention to shine a light on the bigots and preserve the purity of the faith.

So, without further ado, let's begin. The opening line reads, "In middle of the journey of our days I found that I was in a darksome wood — The right road lost and vanished in the maze."

Ok, I'm gonna be honest. My book's a little weird. The above image details the "First Canto" of my poem. That's me, in the blue. I am approached by a leopard, then a lion, then a she-wolf. Eventually, I meet my "guide", the Roman poet Virgil. All of these things make sense to me, but for you, it might be hard. Why? Well, first of all, its 800 years old. Secondly, it's written for Florentines, so, the "average American" might not understand all of my metaphor. And thirdly, it's written as a poem, so I attempt to make the lines rhyme, with little regard for your time :-) 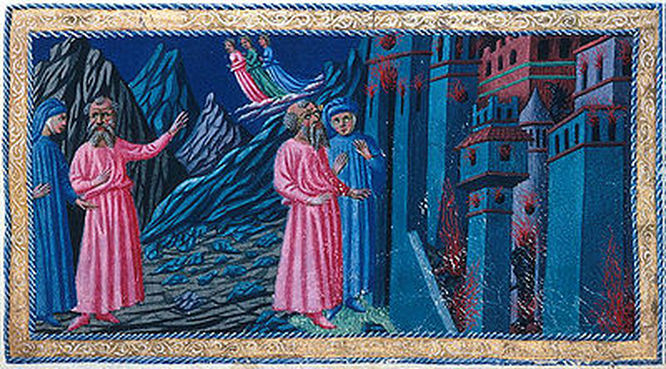 As I mentioned, I meet Virgil in the darksome woods, who agrees to the following:

With me for guide; and hence I’ll lead thee where
A place eternal shall to thee be shown.
There shalt thou hear the howlings of despair
In which the ancient spirits make lament,
All of them fain the second death to share.

In other words, he'll be my guide through Hell. Now, let's enter the Inferno

You've been assigned a "circle" of Hell to visit. Click on the appropriate box below.
There are 9 "circles" of Hell in my poem. And if you wanna see how it ends, read below:
So...what is the point of my story? Just to scare you? Just to bring to life vivid imagery of Hell? No...

What do you think is the thesis of my poem?
I hope you enjoyed your time with me. Click on the link below to return to the "Leaders of Men" page.
"Leaders of Men" Home Page